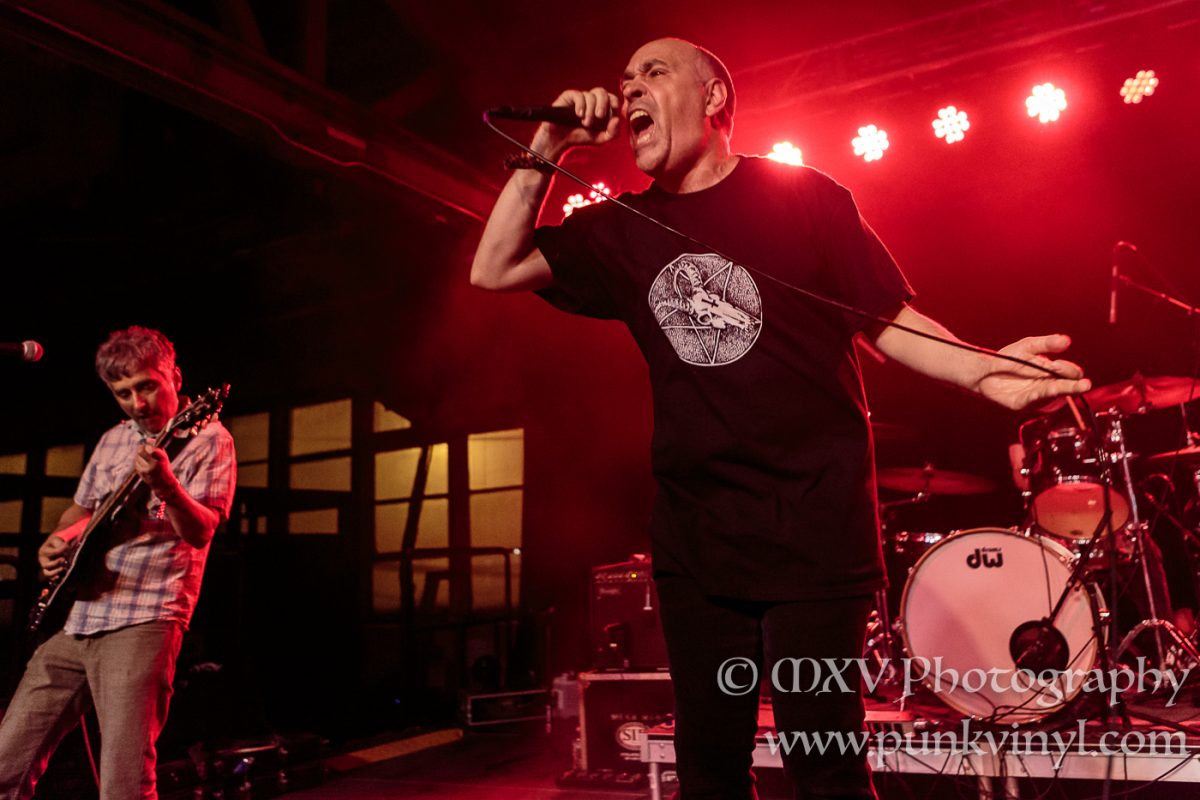 It was a pretty hot Thursday night in Chicago which was made hotter by the great event happening at House of Vans. The relatively new venue in the West Loop threw one of their “house parties” which not only featured a four band bill headlined by the Dead Milkmen, but also a Wax Trax Records exhibit and pop-up store! What more could you ask for if you are a fan of punk/alternative music than that? The answer is NOTHING!

The House of Vans is a really nice venue that is only open for certain concerts (that they call “house parties”) and skateboarding events. The house parties are free, you simply RSVP on the House of Vans website when a new event goes live and it is first come first served until the venue reaches capacity. Not only that but they had free beer and free water the entire evening! The venue is very nice and holds a lot of people. It has some skateboard ramps around the perimeter of one side and had a couple of bars and lounge areas.  Front and center is a nice sized stage for the bands to play. They even had an outdoor patio area with another bar and a food truck. Everything you’d want at a concert event was all there under one roof.  The venue had a nice sound system too, everything sounded great in that room.

First up was a new local band, San Andreas Fault. This band featured a former member of the old (and criminally overlooked) punk/surf band, The Defoliants. This band had a bit of a surf/punk sound too and it was great to see people from the old scene still up there playing music in one form or another. Their set was quite enjoyable and they are well worth checking out if you get a chance.

Next up was Caustic. They were an industrial band, heavy on the machinery (they had two members who played various keyboards/electronics and even a theremin!), along with a drummer. Their songs were aggressive but had enough of a groove to satisfy the industrial dance people and they had good energy.

Youth Code were next. This two piece have a lot of buzz about them in the modern industrial music scene, having fairly recently toured with Skinny Puppy. They mix industrial music with hardcore/metal/thrash and feature a female singer/growler that grunts and growls a lot like male death metal singers. The amount of “oomph” this woman has in her voice is impressive, and a little scary. She also never holds still and has an amazing amount of energy. The other member of the band handles all forms of electronics that produce the musical background for her vocal shredding. They were intense.

Dead Milkmen were the final band of the evening and the place was totally packed when they started playing. The band has been semi-active since reuniting with all the surviving members around 2008. Their live shows are always a ton of fun and this performance was no exception. They came out and started off with “Battery Powered Rat” and then went right into their most popular song, “Punk Rock Girl”. The crowd went crazy for that one and most of the audience was singing along and jumping around like maniacs. From there they went on to play another 90 minutes of material that spanned much of their catalog and showcased their diversity in sound with the faster punk numbers, quirky jangly pop tunes and everything in between.

The crowd rarely stopped moving, the band rarely stopped smiling and every person in the venue both on and off the stage seemed to be having a blast. Even if you weren’t familiar with much of their material it is impossible not to love them when you see them live. Few bands can just deliver that kind of fun and when a band can like this one, their shows are always something special. They definitely put the party in this Vans House Party!