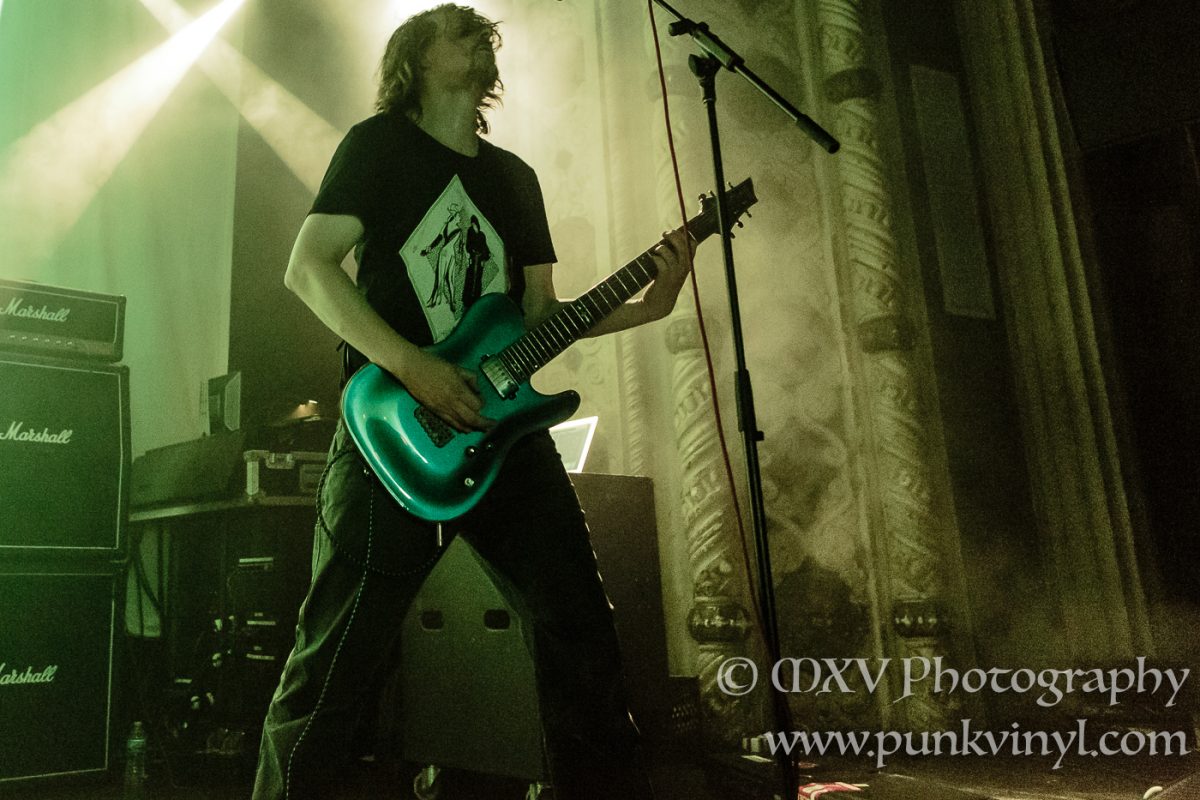 Friday night the Metro and the people behind the Cold Waves festival joined forces to have a show at Metro with the mighty Godflesh as the headliner.  They were joined by three opening acts and it was a great way to escape a rainy Friday night.

First up was Ledge. These guys hail from Chicago and were very heavy. They seemed almost at conflict with themselves whether they were a thrash metal, doom, or hardcore band. One this was for sure, they were heavy. The variety of their song styles made it feel like you got two bands for the price of one. Not a bad way to start the evening.

Mirrors For Psychic Warfare is a two piece band featuring Scott Kelly of Neurosis and Sanford Parker. While this act features the Neurosis frontman, it in no way sounds remotely like his other band. This project is more experimental and ambient. The songs were long, droning, moody passages with layers of background sounds that formed a bed for Scott’s droning guitar strumming and subdued vocals. The pieces built on repetition it was quite a fitting soundtrack for the dark and smokey stage they were playing on.

Harm’s Way was third and they also hail from Chicago. These guys started their set with a cool intro piece that featured processed vocals which made one think they may be more on the industrial side of the spectrum but once they got going they were far from him. These guys were pretty straight forward metalcore. Huge, chunky riffs, growled vocals, fast playing, powerful, you know, the full spectrum.

Godflesh took the stage and once they had all their equipment ready to go, some backing films started behind them while the two band members proceeded to shake and rumble the entire club with their incredible display of power. The sheer amount of power and low-end that emits from just two human beings and a Macbook  is awe-inspiring. They opened with “Anything is Mine” and immediately sounded in fine form. Godflesh is one of those bands that is super consistent with their live shows and is simply incapable of delivering anything short of a pummeling, intense performance and this was no exception. They wasted no time between songs and in fact didn’t speak a single word. They simply went from one song to the next with little to no time between the songs.

The band played a great set that featured a pretty good amount of recent and later material and included songs such as “Post Self”, “Merciless”, “Be God” and others before ending the set with a crushing rendition of “Like Rats” from their legendary Streetcleaner album! The band then left the stage but came back for one more song from Streetcleaner, the title track! It was a great way to end an hour-plus set. After all these years, including coming back from a very long breakup, and Godflesh still has it and is still one of the heaviest bands on earth.