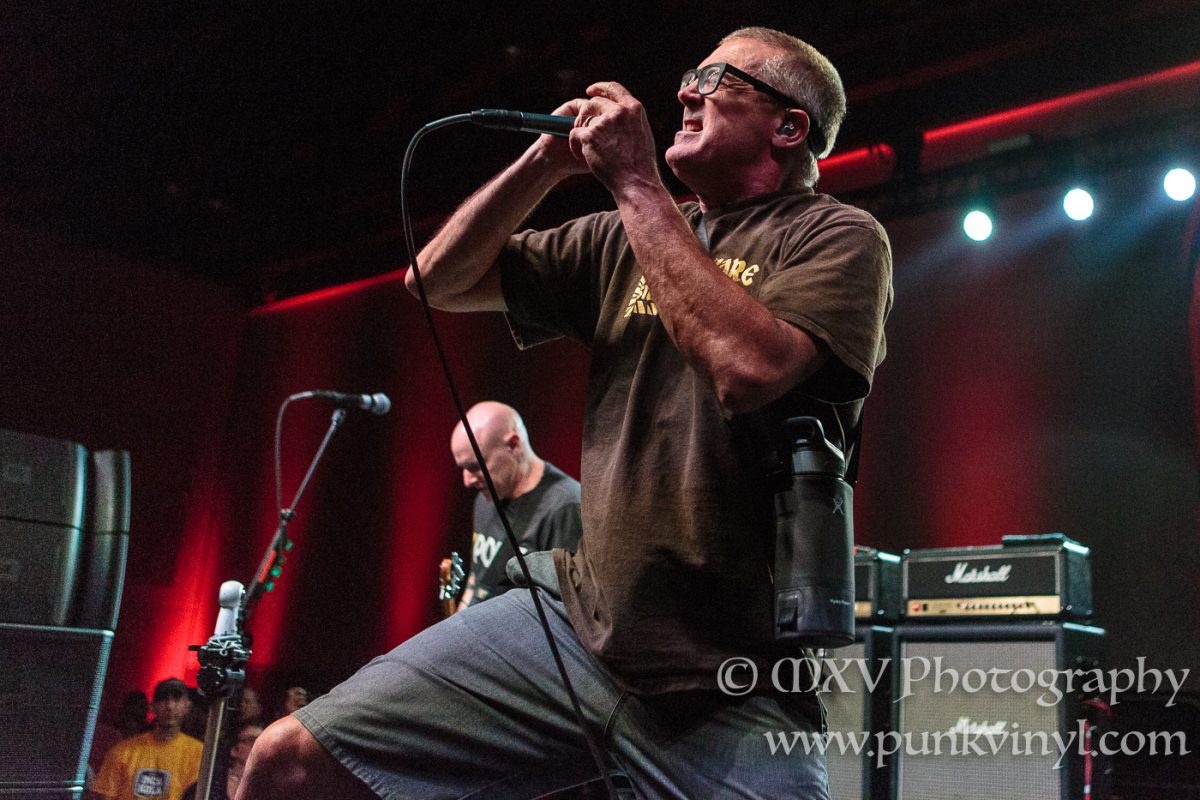 What goes together better than punk rock and beer? The answer is nothing! Ever since Darby Crash uttered “will somebody give me a beer” in The Decline of Western Civilization, and likely well before that, punk rock and beer have been tag team partners. What better way to spend a hot summer day on a Saturday than in a lovely air-conditioned building drinking beer and seeing some great punk rock bands? The answer, of course, is there is no better way! Local brewery, 350 Brewing, put together their best annual 350 Fest ever, headlined by one of the greatest punk rock bands of all time, the Descendents!

The fest was in the very nice Tinley Park Convention center about a half-hour outside downtown Chicago (unless there is traffic, then add at least 50 percent) which is right across the street from the 350 Brewing Company. Inside they had a large stage at one end of the room and both sides were flanked by beer vendors and band merch tables. In the rear of the room was concessions and merch booths. In an adjoining room they had a VIP only area where those with the wristbands got to sample all kinds of free 350 beer flavors, and in the middle of the big room was a wrestling ring that featured a professional wrestling match between each band brought to you by the talented folks at Freelance Wrestling. It doesn’t get better than this!

There was a massive line to get in when the doors opened and they were still pouring in when Burn Rebuild took the stage. They were a pretty straightforward pop-punk band. They played a half hour and it wasn’t a bad was to get the day started.

Next was what turned out to be one of the absolute best bands of the day, Sincere Engineer. If you’ve seen Deanna Belos (the main Engineer) perform under this moniker as an acoustic solo act and enjoyed it (as you should, as she’s great), then you really need to see the full band version of Sincere Engineer! Hearing those songs with a full band playing them adds so much more to the catchy and quirky songs Miss Belos crafts. High on energy, extremely catchy, and a cut above most current bands. These folks were tremendous and their songs just make you want to smile. Waste no time going to see this band if they come even remotely near your area, you’ll be glad you did.

Next up was A Wilhelm Scream. They played melodic hardcore that was a much bigger hit with the younger people in the audience than the older generation. Most of the old timers sat in the back refilling their drinks while the younger generation were up front enjoying the show. They played a solid set and the fans really seemed to dig it.

Long-time Chicago pop-punk favorites, The Smoking Popes, were up next. Truth be told they are far more pop than punk but when you write songs that melodic and catchy who cares! You can’t help but get sucked in with their hooks as they cranked out one great pop song after another. Even if you like your punk rock hard and fast, I challenge you to escape getting sucked in by their excellent tunes.

Mest was up next. How they ranked higher than the Smoking Popes is a bit of a mystery, but they have been around a long time. They played a pretty lengthy set compared to the bands that preceded them. They did seem to have a pretty good following, and their pop-punk style, while not overly original, was played competently, but they were another one that seemed lost on the older folks in the crowd. At one point a couple of guys from Less Than Jake joined them on stage for a song.

Speaking of Less Than Jake, they were next. This ska/pop-punk band seems to play every single punk rock festival everywhere and if you ever have seen them live, you’ll understand why they are a favorite of promoters of these things. Less Than Jake always put on a really high-energy, fun show. Even if you don’t like horns in your punk rock, or you only like hardcore, you’ll still be entertained by these guys. They have something about them that you can’t help but enjoy when they are up on that stage, even if you’d never listen to their records. They once again delivered the goods and were one of the highlights of the day.

Highlights you ask? The ultimate highlight of the 350 Fest was the headlining act, the Descendents. The band that pretty much invented pop-punk and still plays it better, and with more originality than every band they influenced took the stage and put on a clinic of what great and timeless punk rock is. How these guys, who have been at this off and on for coming up on four decades, get better every single time they play a show will go down in the history books as one of the great unsolved mysteries. While every lineup of the band has been good, there is something magical about these four guys playing together, which is why these guys have never left each other since 1986.

For the final hour of the evening, Milo, Bill, Stephen and Karl pumped out one hit after another, and played them flawlessly. They opened with “Suburban Home” and the crowd went nuts and nearly everyone was singing along. The crowd didn’t stop going nuts for the entire set as the band followed with “Everything Sucks” and “Hope” before playing “On Paper” from their newest album. The new songs sound great live, and like the old ones, keep getting better every time the band plays live.

The rest of the set was one crowd favorite after another with a couple newer songs sprinkled in the mix. Every record was pretty well represented except they played nothing from Cool To Be You, which isn’t that surprising as it is really the only record in their discography that wasn’t up to par with the rest of their otherwise flawless releases. While the Milo Goes to College songs are always big highlights, everything from the other records was every bit as great.

The band played their entire set, 29 songs to be exact, all the way through and then left the stage after saying a big thank you to the audience. They left the entire place satisfied, though no one would have complained had they played for another hour! It was a great end to a really great day at a great event that hopefully continues to thrive for years to come.