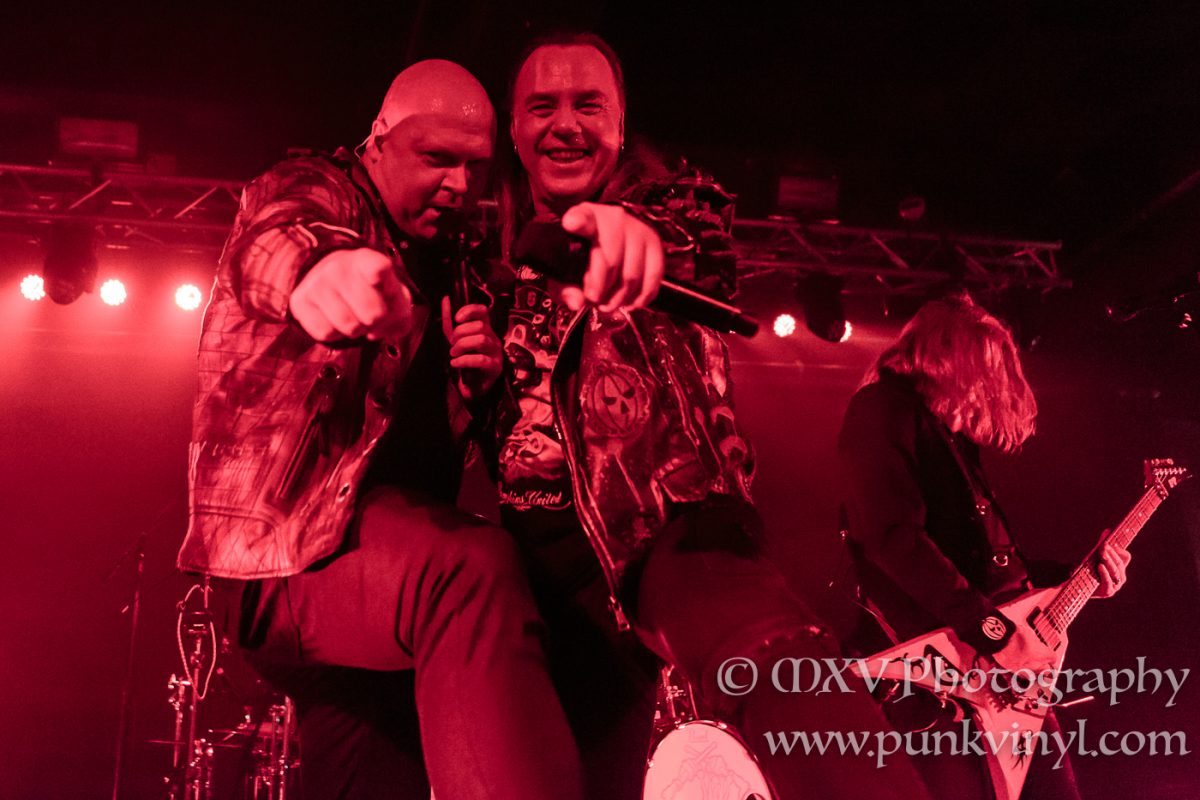 Last night was a special night for power metal fans at the Concord Music Hall as they presented an evening with Helloween. There was no opening bands, and this version of Helloween is unlike any that you’ve ever seen before. There was no opening bands, and the version of Helloween for this “Pumpkins United” tour featured seven members, two of which were original members that have been gone for decades, joined by the five current members. This meant three guitarists, a bass player, drummer, and two vocalists! For this tour only, Helloween’s original singer and guitar player joined the band to form a super version of the band that unites the two distinct eras of the band and the results were tremendous!

It seemed every metal fan came out of the woodwork for this event as when the doors opened the line to get is spanned the course of three city blocks for the sold out event. In fact so many people were waiting in line that many were still out there waiting an hour after the doors opened when the band took the stage, the tail end of the line not making their way into the club until a half hour into the band’s set.

The crowd roared when the seven members of Helloween filled the stage. The current band was joined by original vocalist, Michael Kiske who left the band in 1993, and original guitarist Kai Hansen who left in 1988. They opened with the lengthy epic, “Halloween” which featured dueling vocals by both singers. They had a great dynamic and chemistry between the two and instead of it being some sort of competition it was clear they embraced the tag team nature of doing vocal duets, the two often standing near each other smiling and playing off of each other. Both men have great voices for power metal and the double vocals really added something special to the song. The musicians were moving all over the stage as well, doubling up on power chords and splitting up solo duties. They belted out a powerful wall of sound full of heavy power chords, intertwining riffs and punchy rhythms.

There was a screen behind the band showing custom-made videos to accompany the various songs, all of which was computer generated. They even had animated character skits between certain songs. It was a little hard to see due to the smaller size of the Concord’s stage but it was clear enough to see most of it and really added to the spectacle happening on that stage. Helloween delivered everything fun about a 1980’s metal show: sing along parts, crowd participation, solos, fun banter and interaction with the audience, great songs, and a crowd that ate it up like candy. They covered a lot of ground mixing up newer material with classics like “Keeper of the Seven Keys”, “Living Ain’t No Crime” and more before ending the night with the can’t get it out of your head anthem, “I Want Out”.

When the band members finally put down their instruments they had delivered a flawless performance that ran just shy of three full hours! The band all stood together in the front center of the stage, joined hands/arms, and took a well deserved bow. They then spent a considerable amount of time shaking hands, high-fiving, and thanking the audience with guitar picks and drum sticks. It was an amazing performance that delivered both musically and visually and is this version of Helloween is likely a once in a lifetime touring event so it is not to be missed given a chance before the tour comes to an end. However, were these guys to decide to stick together and keep going, you can be damn sure no one would complain!