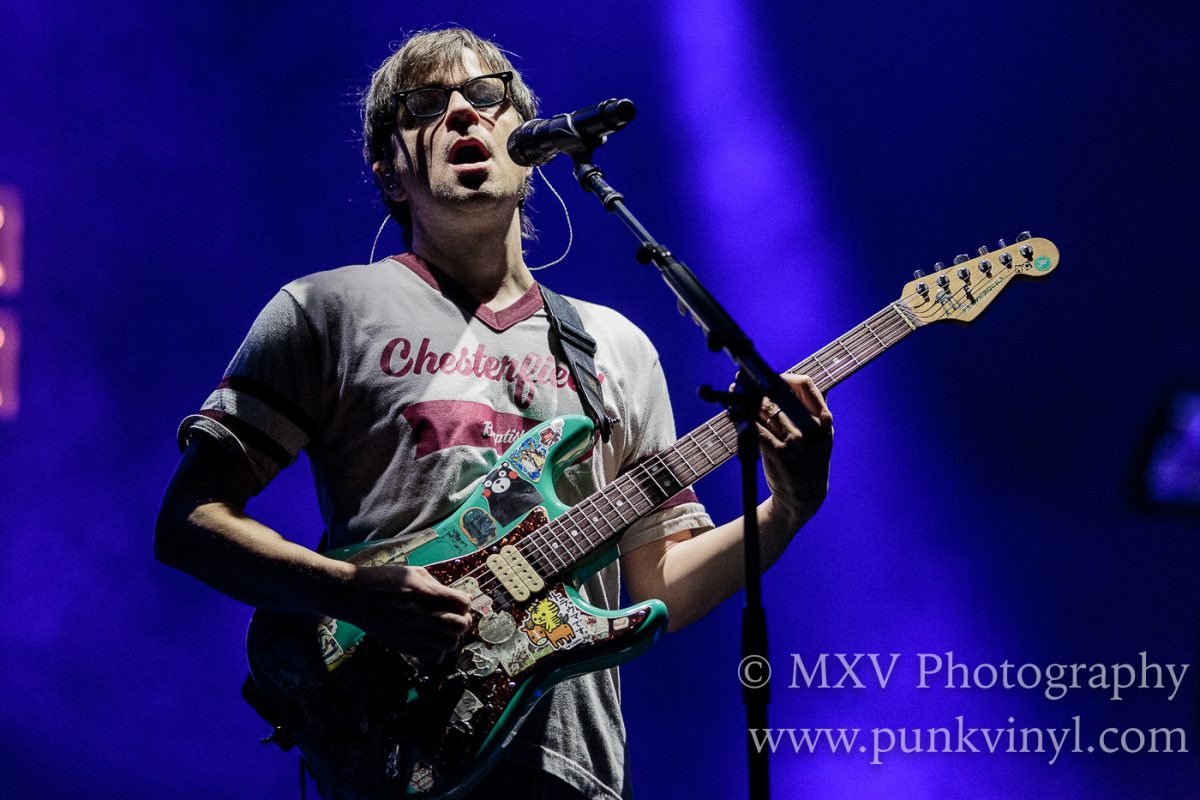 As summer starts to wind down and the kids go back to school, the city of Chicago has one last blast before the end of the season and that’s Riot Fest! The festival happens in the middle of every September and quickly became the best outdoor music festival this city (and most others) has ever seen. It offers a diverse lineup of bands that appeal to a wide range of music fans who all come together for three fun-filled days out in the sun. Aside from the intimidating number of bands playing over the course of the weekend, spread across five stages, the fest also features tons of food vendors, carnival rides, games, music and clothing vendors, haircuts, booze, bags, and a lot more. There really is no better way to spend a weekend than in the confines of Douglas Park for the weekend. What bands played you ask? We’ll get to some of those now.

Pussy Riot certainly has gone through their fair share of adversity over the past few years and that continued the week leading into Riot Fest when one of the band members ended up in the hospital after being poisoned! The remaining members of the Pussy Riot organization were present on stage early on Friday to play the show. Masked members of the group held up a sign referencing the aforementioned member which made for the backdrop for their performance. They mixed performance art with punk, rock, and even a bit of dance influences. They were very entertaining and had a strong message behind their music which was a perfect fit for the Riot Fest. It was an excellent and very interesting way to start the day.

K. Flay ended up being one of, if not the highlight of the day. This young lady had an amazing and captivating voice and mixed indie pop with rock and a bit of hip-hop to create some really catchy tunes that also packed a punch and got your ass moving. How she’s not a household name and more popular than the plethora of manufactured female pop stars is one of life’s great mysteries but K. Flay is the real deal and is absolutely worth seeking out. Run, don’t walk, to whatever venue she is at should she come through your town!

Sum 41 played next and they drew a huge crowd of mostly younger folks. As expected they all went nuts throughout most of their set. The band’s brand of pop-punk (which really is just fast pop songs) sounded pretty spot on and their legions of fans seemed to really enjoy their energetic set as they sang along to all the “hits”.

Fans of early rap/hip-hop had a real treat this year as Digable Planets recently reunited and played on Friday. Not only did they reunite but they were also playing their album, Reachin’ (A New Refutation of Time and Space) in its entirety! The band took the stage and were all smiles and when they started playing they sounded like they never quit playing together at all! Everything sounded great and on top of the three vocalists, they also had live guitar, bass, drums, and electronics. Their set once again proved how superior classic rap/hip-hop is to the current crop of artists and hopefully this isn’t the last time we see Digable Planets performing at Riot Fest, or any other stage for that matter. They really were Cool Like Dat!

Flogging Molly won the prize Friday for most energetic set of the day. These Irish drinking punk guys and gals put on a clinic for this style of upbeat, fast tempo, rowdy drinking songs. They were light years better than most bands playing this style of music and even if you don’t think you’d be a fan of it, you can’t help but start tapping your feet and bouncing around once they start playing. The crowd went nuts, beer was flying around, everyone was drinking and singing and dancing, and the beer tent sales must have gone through the roof during the 45 minute set. What a fun band!

Taking Back Sunday was one of three (better) replacements for Blink 182 who cancelled a week prior to the fest. Trading Weezer, Run The Jewels and Taking Back Sunday in place of Blink 182 was really a big upgrade and Taking Back Sunday proved that by once again dominating a Riot Fest stage with a strong performance of their alternative/emo/rock. Catchy tunes, passion, punch, loud guitars, a singer than dances around and rarely stands still, and a hungry crowd made for another great set by these guys whose live performance blow away any of their recorded material. If you had just traded straight up these guys for Blink 182 you’d have gotten a great deal based on how great they sounded on Friday.

Face To Face played nearly an hour over at the Rebel Stage and it was almost an hour of nearly non-stop punk rock hits. These guys have been at it a long time and unlike many pop-punk bands, they lean way heavier on the punk side of things which is why these guys sound so good. They blazed through a great set and the crowd loved every minute of it. They were so good they deserve to be back on as many Riot Fests as they can attend!

Weezer were another late add to the lineup this year and they were the headliner of the evening. They opened their set with most of their most popular songs before switching things up and playing a bunch of cover songs. Things seemed to start ok and they sounded pretty good but as they got further into their set and started doing the covers, they just seemed a bit off. Perhaps it was lack of rehearsal, or perhaps it was just an off night but the general consensus among the audience was that they were off that night and the number of covers was puzzling, especially when they covered the same Blink 182 song that the band who played the stage next to them did right before Weezer’s set. Usually Weezer is a pretty rock solid live act and it was a shame they weren’t up to their usual standards but it still wasn’t a bad way to end the evening.

With the absolutely perfect weather and the abundance of excellent bands, Riot Fest 2018 really got off to a great start, and it only got better from there! Check back tomorrow evening for day two!