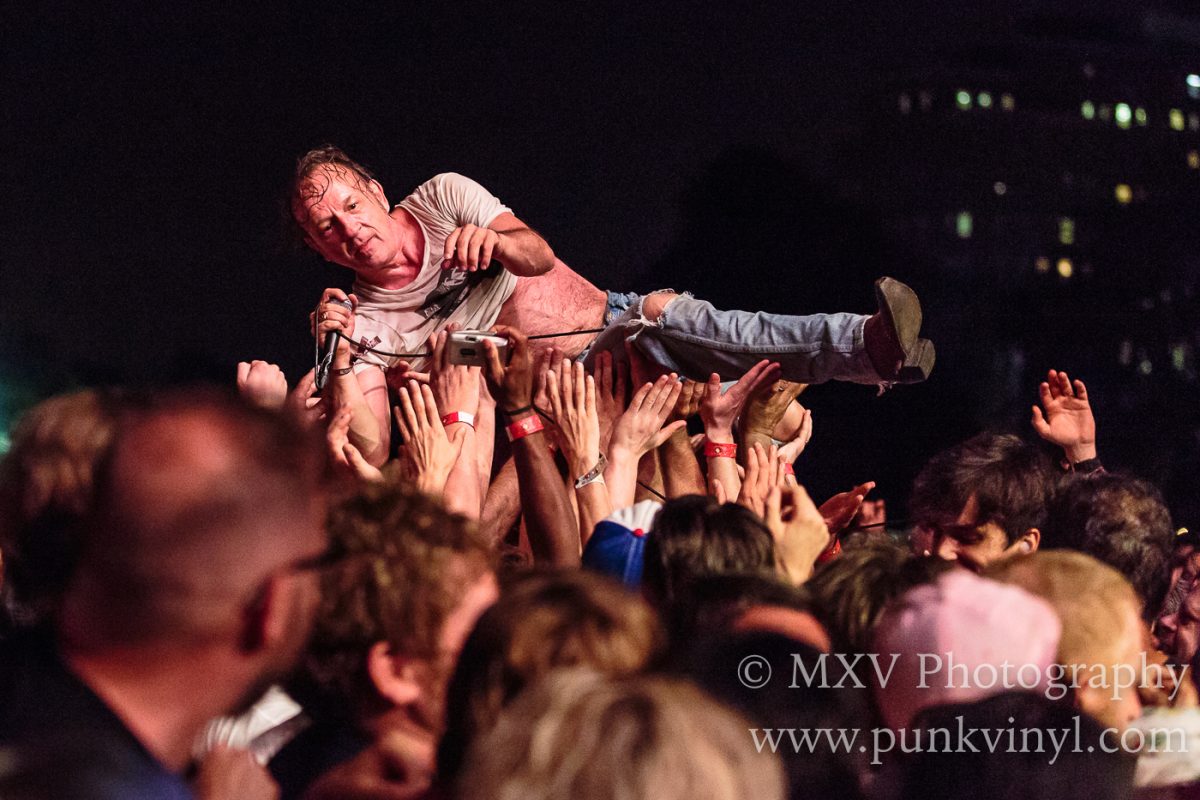 Day Two of Riot Fest saw the strongest lineup of bands on a single day and had the nicest weather of what was as perfect of a weekend as you could ask for in regards to the weather. The crowd was noticeably larger on this day and they showed up early too! There was a lot to love about Riot Fest Saturday, especially for us old-timers!

Health was a three-piece band who mixed electronics with ambient and metal. They were super heavy on the low-end, sending rumbles so low and hard that it sent shock waves throughout the entire park. They also had droning guitar at times, danceable beats, and soft, subtle vocals that were downright peaceful at times and aggro at others. One member who did some vocal duties also traded between instruments and some other mysterious devices he kept under a moving blanket, all while whipping his long hair around and dancing about the stage. They were really interesting while their short set lasted, which was unfortunately cut even shorter when they started experiencing various technical problems after their first three songs. What they were able to perform until that point, however, was excellent.

Gary Numan was next and he totally stole the show. His performance was without a doubt the highlight of this year’s festival, and this was a year that was chock full of great performances! Gary and his band took the stage decked out in costumes that fit the theme of the latest Gary Numan album, Savage. Starting the set with “Everything Comes Down to This”, Numan ripped through a set that consisted of mostly his newest material from his most recent few records such as “Here In The Black”, “Love Hurt Bleed”, and “Halo”, mixed in with “Metal” and the prerequisite “Cars”. After eight songs, they closed the set with “My Name is Ruin”. Numan sounded better than ever, the performance was one of his strongest (and his shows are always great), and it was great to see him playing to such a large crowd. His performance was headliner worthy and hopefully he turned on a lot of new fans at the fest this day as he deserves to be playing to audiences this large everywhere. It was nothing short of amazing and was part one of Saturday’s “amazing trifecta”.

If you were a punk rocker in the 1980’s you may be familiar with Conflict. Hailing from the UK, Conflict are a politically charged anarchist punk rock band who shared the views of Crass but were a better band. They were one of the best UK punk bands of the 1980’s and put out a handful of amazing records. If you were a fan of them back then in the USA however you likely never got to see them as they never once toured the US and only played a couple of shows in California that they were flown out special to do back in the day. Those of us who lived here in the Midwest never got a chance to see them play until now. The band had played here one time prior to this a year or two ago so this was only the second time they’ve ever been to Chicago. Unfortunately the only member of Conflict left from those days is the singer, but if you are going to have a version of a band with only one original member, the singer is the one you’d want, especially in this case. Conflict started off a little rough but by the time they got about a quarter of the way through their set, things really clicked and the remainder of the set was really strong. They did a good job documenting much of their discography with the songs they played, but sadly omitted both “Neither is This” and “From Protest To Resistance” which are their two best songs. The latter was especially puzzling since that was the song they had on the P.E.A.C.E. compilation which was probably a lot of people’s first exposure to the band if they lived in the United States. That aside, it was a real treat to see any version of this legendary punk rock band and once they found their groove in the set, it was excellent.

Going on four decades now and counting, Killing Joke has enjoyed an amazing career that is doubly impressive when you take into account that they never put out a bad record the entire time. They keep making great records these days but getting to see them live has become increasingly rare due to their penchant for cancelling tours and shows but not only did was that not the case this time, but their performance was well worth the wait for their return. Opening with “Love Like Blood” set the stage for what was a spotless performance. They did a fine job playing some old favorites like “Requiem” with some of their recent material. All four original members of the band were all in fine form and they cranked out the songs like a well oiled machine in its prime. Killing Joke was another of the absolute best of the fest performances and part two of Saturday’s “amazing trifecta” that took place throughout the day. The only complaint one could muster up about Killing Joke was that it was a shame they couldn’t play for another hour!

The Jesus Lizard will go down in history as one of the best live bands of any genre, ever. Their songs are unique and amazing but their live performances are nothing short of legendary. The chemistry this band has in unlike anything witnessed, or heard before, and what the band showed this night at Riot Fest was that no matter how much time goes by without playing, these four guys haven’t lost a step and they can go like they are still in their twenties! David Yow is still an absolute madman, prowling and running around the stage and jumping into the audience to be crowd surfed for entire songs, while never missing his vocals while doing it! The guy is a fearless ball of energy that hurls about the stage and audience and in turn, the audiences go completely apeshit! They spent an hour playing one favorite after another, all sounding amazing and warping time back to channel their younger selves when they were an active touring band. To put it simply, their performance Saturday night was nothing short of magical and is something that will be talked about decades from now from those of us still around to share the story. It was the third of the “amazing trifecta” that day, and easily one of the best performances in Riot Fest history!

How could anyone follow The Jesus Lizard ? Well someone had to and that someone was Andrew WK. Andrew has been a staple of every outdoor Riot Fest and has always delivered the goods and this was no exception. Andrew and his band played their trademark party anthems and got a large crowd that packed in to see them all worked up into a sweaty frenzy. They were powerful, catchy, and just plain old fun. Andrew WK is always a fun time and they turned up the fun full blast to cap off an amazing Saturday of live music.

Saturday was easily the best of the three days of Riot Fest, but Sunday still had a lot of great bands in store for the audience. Tomorrow we’ll cover the final day of Riot Fest 2018!