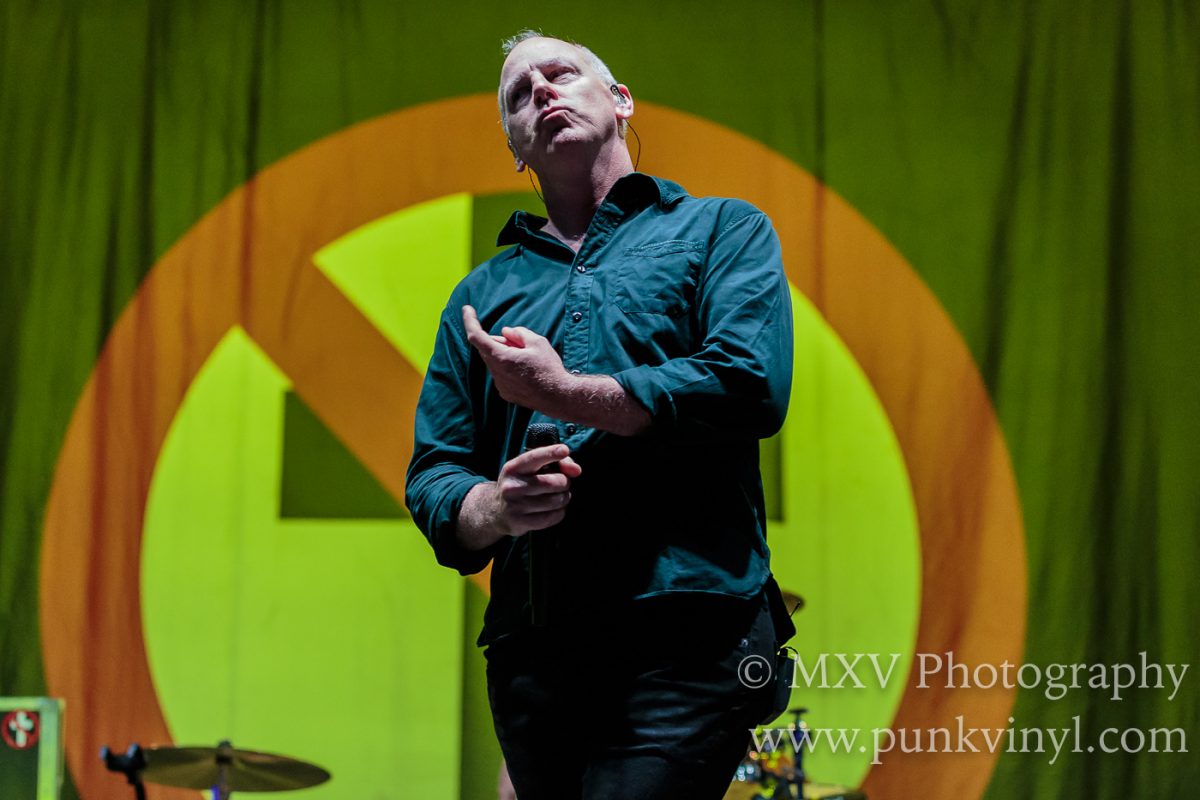 It was a hot Sunday for the final day of Riot Fest but that sure beats rain and the action on Sunday happening on the various stages matched the heat and made it well worth the sweating and risk of sunburn.

First wave punk rock legends, Fear, played their first Riot Fest this day in celebration of the band’s 40th anniversary. Not only were they advertised to be playing their entire first album, The Record, but what wasn’t advertised and came as a wonderful bonus is that for the first time in more than three decades, the band is restored to 3/4 original members, which is all of the surviving members! Lee Ving may look like your grandfather these days, and could in fact be older than he is, but the man can still play some great punk rock. The band opened with two newer songs before playing The Album in order. It was a real treat to have all the surviving members who played on that album on stage performing it, and the songs sounded great. They had a couple of minor hiccups here and there in their playing but that’s to be expected considering how long it had been since they were all together and none of it detracted from the enjoyment of their set. When they finished that album’s material they were set to leave the stage but Lee called for one more song and they ended their show with “More Beer” which was a big hit with the audience, especially the day drinkers!

The first wave punk legends didn’t stop there as the Avengers took the stage next! Founding members Penelope Houston and Greg Ingraham were joined by two younger members on bass and drums and they played nine Avengers classics to perfection. They opened with “Cheap Tragedies” which is easily one of their best songs and followed it quickly with “We Are The One”! Penelope Houston is one of the greatest front women in punk rock history and her voice sounded great, and the band tore through their set with one great tune after another. It was a shame they weren’t given more time as they were one of the real highlights of the day. This was punk rock at its finest, played by one of the best American punk bands of all time.

Johnny Marr of The Smiths fame was next and as one would expect, had a huge crowd watching him. He traded off songs from his various solo efforts, which sounded great, with some Smiths classics which also sounded great. If you haven’t checked out any of his solo works you are missing out as his stuff is really good, and in fact much of it sounds better than his former lead singer’s solo works, especially if you liked The Smiths music. Johnny is a pretty charismatic front man in his own right and put on a hell of a good show.

Another legendary punk/hardcore band was up next and that was Suicidal Tendencies. They were advertised to be playing their entire first album at this show and they almost lived up to that except they left one track out of the set. The band played super fast and furious and had an amazing amount of energy, especially singer (and only original member) Mike Muir who has to be ingesting a mounting of speed before going on stage as there is no way a man that age can be that amped up and have that much energy without getting tired. What was unfortunate however was their delivery of this material didn’t sound like Suicidal Tendencies playing that material, well not the Suicidal Tendencies that recorded that legendary album, but instead sounded like a speed metal band covering the first Suicidal album with a guy that sort of sounds like the singer from Suicidal Tendencies doing the vocals but not really. Yeah the argument can be made that this is the band now and that’s been the case for a couple of decades now, but when you have trouble recognizing some of those songs that have been etched into your brain permanently for the past 35 years then something isn’t right. It didn’t stop the audience from going completely nuts the entire time so it wasn’t that it was bad, it just wasn’t as enjoyable as it should have been for an old-time purist who hold that album in the highest regard. If you are into super high-strung, energetic thrash/speed metal though, these guys will push all the right buttons for you in that regard.

Superchunk has been around a long time and making solid records the entire time and they made their Riot Fest return this year. Much like the last time they played, they played a rock solid set of new songs and some older favorites that was high on energy and super catchy in their trademark indie rock style. There’s no such thing as a bad Superchunk show and hopefully this isn’t the last time we see them on a Riot Fest stage.

Pop punk darlings, Alkaline Trio, made a gigantic crowd of younger fans go completely nuts, scream, cry, jump, dance, crowd surf, and everything in between. The security staff had their had their hands full the entire time as the band played a soundtrack for the kids to go crazy to. They were in fine form and gave the audience their money’s worth for sure.

Bad Religion is one of those band that you can count on to always put on a great show. They are so amazingly consistent that it is doubtful than in the past thirty something years that they’ve ever had a bad show. Just like you can always count on death and taxes, you can always count on Bad Religion being worth your time and money if you are a punk rock fan. For this Riot Fest appearance (they’ve become a staple of this festival dating back to the club show years) they not only did some various “hits” but they played the entire Suffer album to celebrate its 30th anniversary. Widely regarded as one of their best albums (which it is, second only to their first album), seeing them play the entire thing was something really special and they absolutely did it justice. It felt as special as it should have and just like always, Bad Religion put on another great show.

Riot Fest 2018 was a truly fantastic weekend. It was heavier on great punk rock this year, gave plenty of other musical options and with such a great staff and great entertainment options, was the best weekend of the year. Just like Bad Religion consistently puts on a great show, there has been no such thing as a bad Riot Fest and 2018’s version will go down in the record books as one of the most fun fests of all! Excellent work by everyone involved with putting this amazing fest together, Chicago is sure lucky to have them!