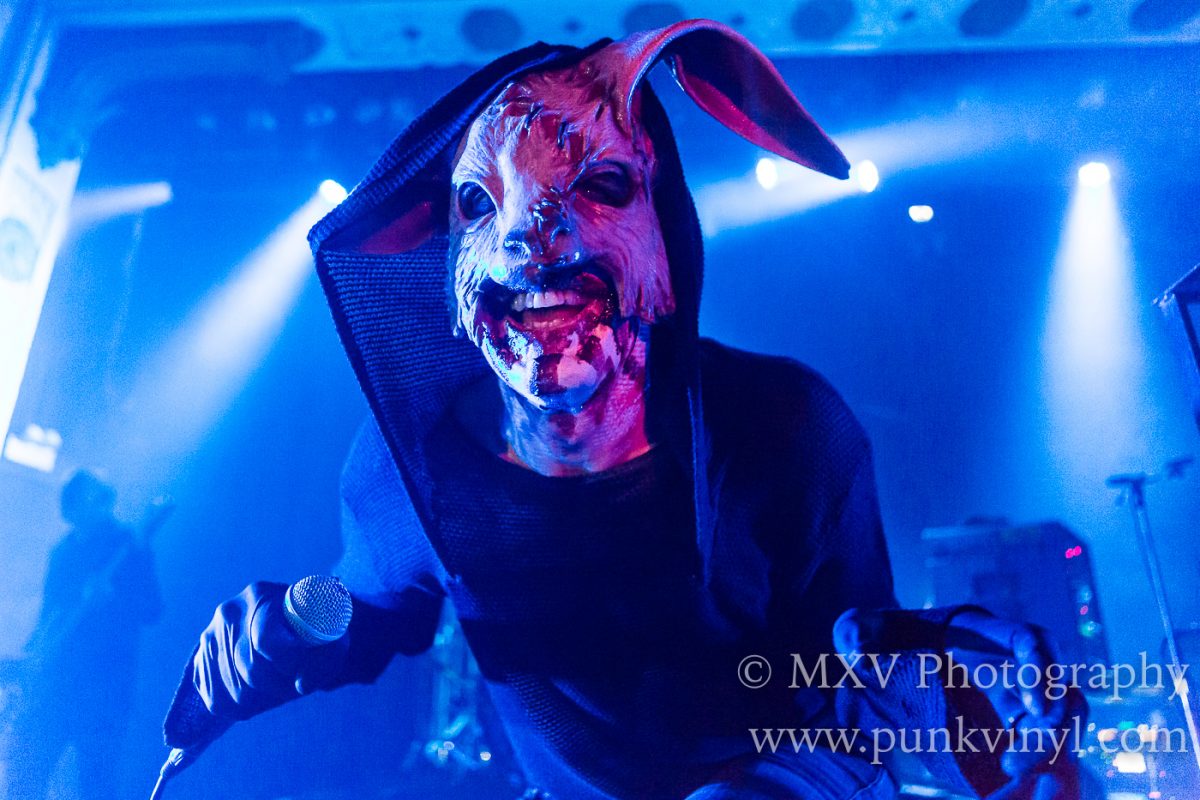 What do you do once Riot Fest is over? If you like industrial music and are in the Chicago area you move indoors to the legendary Metro for the Cold Waves fest! The first of three days featuring some of the finest industrial bands both past and present started Friday night and what a lineup it was!

Omniflux was a one woman show where Omniflux the person wrote, composed, and performed all of her own music. Her stuff was a very enjoyable industrial dance/goth/electronic blend and her vocals are equal parts soothing, haunting, and beautiful. She played in total darkness with video images displaying on a big screen behind her while she manipulated all kinds of musical gear as she crooned. It was excellent!

Hide was next. This was a two-piece that saw a female vocalist and a male musician. The singer twisted and writhed around the stage while belting out some really intense, processed vocals over some hyper dark and aggressive machine music. They were super heavy, blasting out powerful blasts of noise, heavy on repetition which was downright hypnotic. They too played in total darkness save for two low powered strobe lights which made for some creepy visuals to match their dark, brooding sounds. Well done!

Cocksure was next and they are no strangers to Cold Waves not only have they played a couple of them in the past, but one of the members is the man behind the festival. Chris Connelly and Jason Novak assaulted the audience with their hypersonic industrial noise. Heavy on beats, fast paced and unpredictable, Cocksure is loud, abrasive and in your face. Their aural assault was complimented by seizure inducing strobes and flashing lights and they leveled the audience and left them sweaty. Chris Connelly is even more of a commanding front man than ever.

Lead Into Gold is the recently reactivated side project of Paul Barker (formerly of Ministry, Revolting Cocks, The Blackouts, and many other bands) that has origins tracing back to the heyday of the Wax Trax scene. Paul handled everything himself this time out and sang while occasionally playing guitar as images displayed on the screens behind him. He played a handful of his newest material before busting out a couple of classics at the end of his set. Omniflux joined him for a couple of tracks as well. He sounded great, the selection of material was excellent despite the fact he has still yet to play the best Lead Into Gold song (“Hatred), and it was an even better performance than his last Cold Waves appearance!

Seven years ago, Chem Lab played the first Cold Waves as their big farewell as Jared Louche, leader of the band, decided that with Jamie Duffy’s passing, it was time to retire Chem Lab. Retirement in music sticks about as well as retirement in professional wrestling and here at Cold Waves VII, Jared decided to retire from retirement and bring Chem Lab back. When you have a band that good, it can’t stay retired and the audience welcomed Chem Lab back with open arms as they were treated to a super energetic performance of Chem Lab’s best record, Burn Out At The Hydrogen Bar! They played the entire thing in order and it sounded better than it had in years. The time off sure seemed to recharged Jared’s batteries too as he was a bundle of energy and positivity. He talked a lot between songs as well and the return of Chem Lab was a huge hit with everyone and will go down as this year’s highlight for sure.

Ogre from Skinny Puppy had a pretty busy year so far, releasing a new solo album under his moniker, Ohgr recently and embarking on a full tour to support it. He also was a victim to an attack before one of the shows less than two weeks ago where his jaw was fractured and like a true superhero, he still performed their show that night. Ohgr missed none of their bookings and has been delivering stellar performances every night of their tour and this was no exception. Ogre was dressed like some sort of nightmare rabbit as he pranced, danced, and stomped around the stage while Ohgr the musical act played a great selection of songs spanning all of the Ohgr albums. It was a pretty even mix of the number of songs taken from each album and it all sounded amazing. Ogre the man even had some tricks up his sleeve with a magic wand, hat, and magic box that he pulled a rabbit from.

Ohgr played well over an hour before leaving the stage and then returned a few moments later for a one song encore, “Minus” which was as strong of a finish as you could hope for and the best song from the first album. It was a fantastic finish to six hours of great industrial music and an awesome start to the weekend.