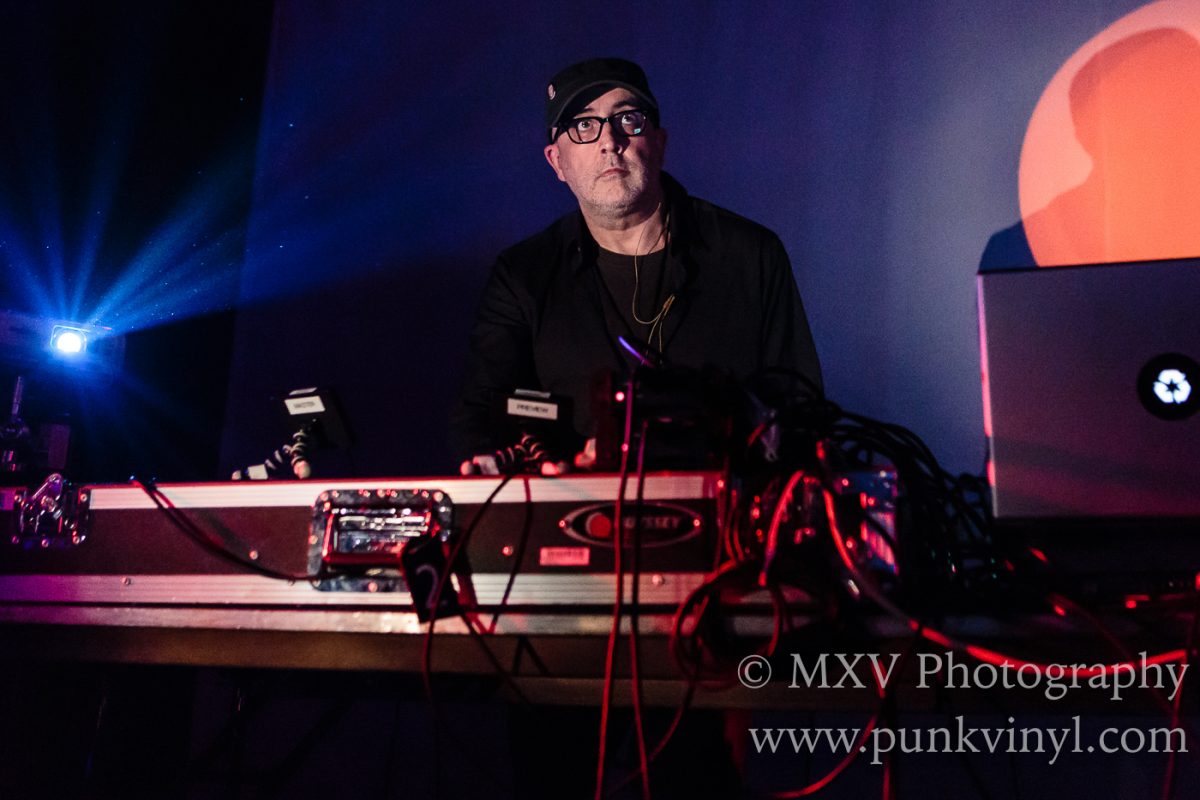 Less than 24 hours after everyone left the Metro at the end of the first night of the Cold Waves fest, they all piled back into the club for the second night of mechanized musical entertainment. The crowd was relatively the same size as the previous night and it was pretty clear that most of the audience wisely opted for the three-day passes.

Hellbent, minus some past members, played a strong set of electro-industrial tunes that had heads banging, people dancing, and generally enjoying their mechanical, percussion heavy sounds. They did a solid half hour of material that packed a hell of a punch.

Author & Punisher is the one man musical outlet of Tristan Shone. Shone fabricated all his own mechanical musical equipment, a main one being this apparatus he controls with his arm that has a big sliding metal device that controls percussion. He straps wires to his body, has a unique processing microphone and all kinds of electronic gadgets and metal instruments all surrounding him like a giant shroud. Not since early Einsturzende Neubauten has there been an industrial artist in the truest sense of the word as Author & Punisher. The sounds were relentless pounding with layers of textures soundscapes and mechanized, growling vocals. It was amazing and anyone who likes the heavier, noisy side of the scale in their industrial music will fall in love with this act. It was tremendous and a sight to behold!

C-Tec was next. This band is a side project of Jean-Luc De Meyer of Front 242 along with Marc Heal of Cubatate. They were joined by two other musicians to round out the band. Their music was similar in style to much of Front 242’s music, very dance driven, electronic body music. The beats were heavy and fairly fast paced and the songs were very catchy leaving you no choice but to start dancing your ass off. Their high energy set translated to a crowd full of actual dancing (not moshing) and they were a real high spot of the evening.

Meat Beat Manifesto have been around a long time and they’ve evolved over the years both musically and in their live shows. Current Meat Beat Manifesto features two gentleman along with enough laptops and gizmos to fill two long tables, which were placed side to side. Jack Dangers and his tag-team partner each had a table of gear as they weaved sounds together while films played both behind them and on a screen that obscured most of the audience’s view of them. Since they mostly stand there staring at screens, the visuals are a welcome addition and made for a cool audio/visual experience. The front half of their set was largely newer material and severely lacked any vocals. It was more akin to a less ambient performance by The Orb but much heavier on the noise and percussion. The material all sounded good and you could even dance to much of it. The back half of their set is where things really got good as they started to play some older material from the Wax Trax years. This is where Dangers started doing a lot of vocal duties and the crowd really got off their feet and got moving. Nearly the entire main floor was full of people dancing around like a giant dance club. They twists and layers they added to the older material really made it shine and showed how timeless those songs really are and the audience worked up a hell of a sweat dancing to it.

Meat Beat put in just over an hour of material before playing one last song and closing the curtain on the second night of Cold Waves. They were excellent and it was a great way to end the evening. The audience left the club to either continue the party down in Smart Bar or get some rest so they could return the next night for the final day of the fest. Another wonderful evening of great industrial music.