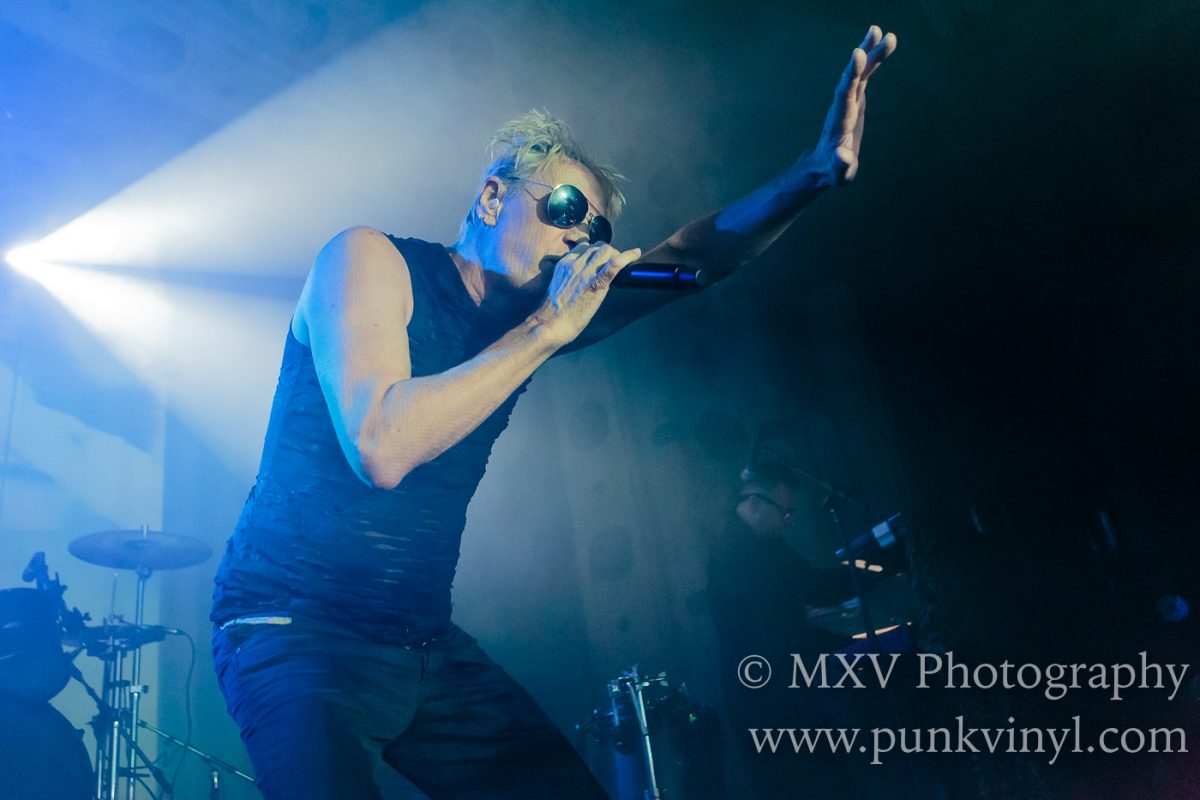 Sunday night was the final night of the annual Cold Waves fest over at Metro. They had some solid acts lineup up to end the weekend and the action got started early.

Caustic is a midwestern band that has been making the rounds lately. They were a last-minute addition to the lineup when Die Krupps had to cancel due to visa problems. It was a nice addition as they played some hard-edged industrial music with driving beats, great noises, and gruff vocals. They were even more energetic than their last show here earlier this summer and something about them give a bit of a similar vibe to early KMFDM (ie: the good era of KMFDM). They were a lot of fun and well worth seeing.

Continues was a one man band who was a founding member of Babyland (if you aren’t familiar with them look them up, they were awesome)! He took the stage and triggered all his music from a laptop while he sang live vocals over top of it. The songs were super catchy electronic synth pop and his vocals were very melodic, especially compared to his former band. He danced and pranced all over the stage and there was a lot of passion in his vocal delivery. He had some cool lights on stage that looked like old vacuüm tubes. Two comical things took place during his performance: one was his request for more fog, which has to be a concert first, and the other was when he was dancing with a plug-in work light that he used to illuminate himself while singing. It looked equal parts corny and neat. He really owned it while doing that and got so into it that while swinging the light around by its cord, it smacked into the stage and the bulb exploded. The music was great, as was his vocal delivery and passion which resulted with it really being the surprise hit of the day.

Actors was less of an industrial band and more of a goth tinged post-punk act. It was hard not to make comparisons to Joy Division as it was pretty clear they had to be a big influence on the band. Their material sounded great with the angular guitars and dark sounding tunes. It was an enjoyable set and made for a nice change of pace in the overall musical sound of the evening.

The Black Queen features a former member of Dillinger Escape Plan but you’d never know it by listening to this band as they are totally different in every way. The Black Queen were electronic laced, post-punk/alternative rock. There was a real eighties vibe to some of their songs (meant as a compliment) and they were super melodic. It was a strong and interesting performance and they were also the most accessible band of the night.

Front Line Assembly closed the show with a real spectacle of flashing lights, deep fog, and great, aggressive industrial music. Heavy on everything, they commanded the stage and floored the audience with another stellar show. Where Bill Leeb still gets all this energy is a mystery but the man hasn’t slowed down a bit after three decades of doing this! Their set was a showcase of their newest stuff with some past hits sprinkled in. They had cool visuals and an amazing amount of power. It was really ended the weekend with a bang!

The seventh Cold Waves was once again a great gathering of great, like-minded people all celebrating a worthy cause while being treated to fantastic musical performances. Between Riot Fest and Cold Waves, September is easily the best month in Chicago and it will be a long year waiting for next year’s Cold Waves but I’m sure when it hits, it will be worth it.