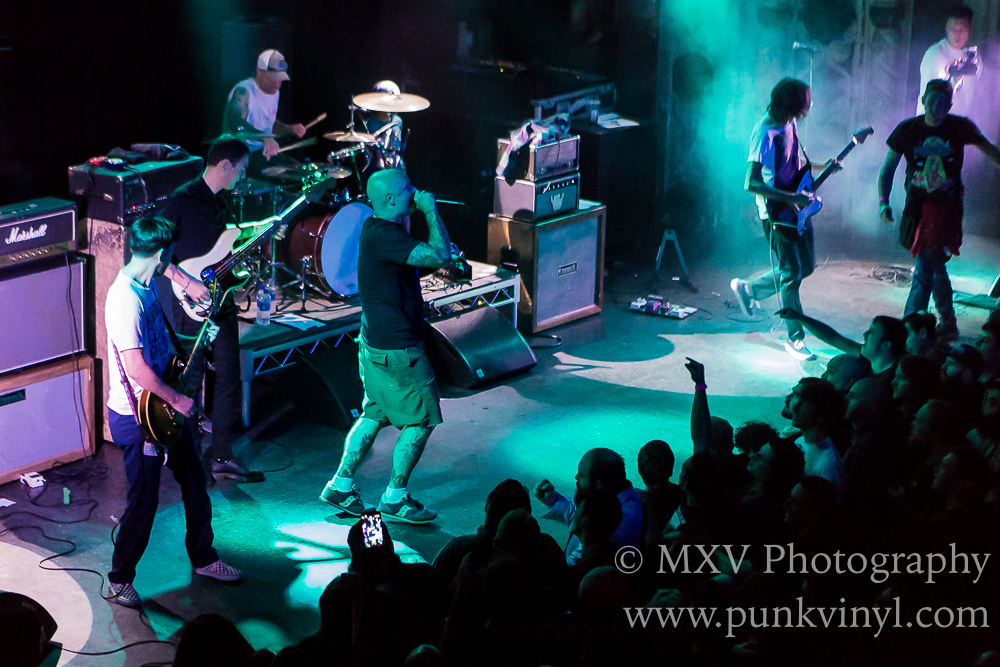 Saturday the Metro hosted a good old-fashioned hardcore matinée in the spirit of CBGB when Gorilla Biscuits headlined a three band bill.

Modern Life Is War was the second band of the day and got the crowd worked up into a frenzy quickly. They played super energetic, metallic edged hardcore. The singer had deep, growling vocals and they were a pretty tight wall of sound. The kids went bonkers throughout the entire set and many of the ones up front were singing along any time the singer held out his microphone for some assistance. They were quite enjoyable despite their decision to cover Black Flag’s “Nervous Breakdown”. Really, it is amazing that no band has ever thought to cover that song before now. These guys were geniuses! </sarcasm>

It was only 2:30 pm and the packed Metro reverberated with the excitement of Gorilla Biscuits fans of all ages. Much like their début album, the show began with a live horn leading into the song “New Direction”. The crowd exploded to the sound of that horn and the energy did not cease for a second throughout the 60-minute, 19 song set. Unlike most shows at the Metro, there were no barriers between the stage and the crowd. This was upon request of the band and while that resulted in the crappy balcony photos you see before you, it also aided in a high-energy show with lots of interaction between the band and the crowd. Throughout the entire performance, fans were dancing on and diving off the stage into a tightly packed crowd.

The mic was shared liberally between vocalist Civ and the fans who clearly knew every word. Civ gave a masterful performance as singer, ringmaster, and comedian. Civ’s banter was plentiful and genuinely funny when interacting with audience members. He also spoke on the current political climate – dedicating “Stand Your Ground” to women in this country, who he described as “under siege”. The setlist covered their discography well. They played four songs off of their self-titled 7” and all but one song off Start Today (“Two Sides” being the omission). They even did one song by their follow-up band, CIV (“Do Something”). A few covers were thrown in – Gorilla Biscuits staple “Sitting Round at Home” originally by the Buzzcocks and “Minor Threat” by Minor Threat. The only glaring omission of the set list may have been “At the Matinee”, especially considering this was a matinée!  The show was a smashing success. It remained positive and entertaining throughout. Long live the hardcore matinée!