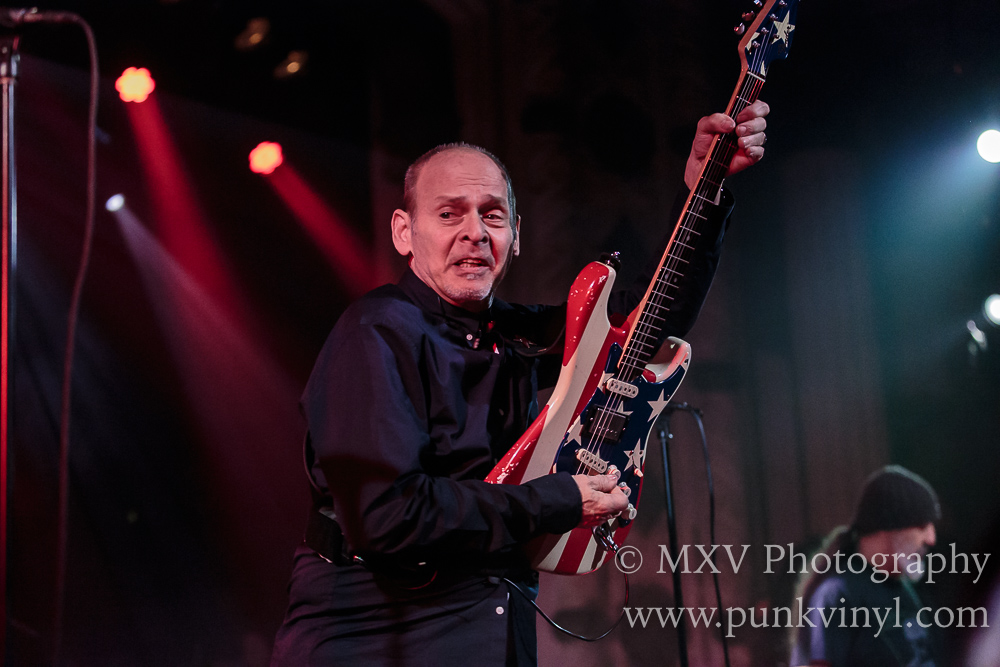 Wednesday night was a very special one as the Metro hosted a celebration of one of the most important rock and roll bands of all time, the MC5.  The celebration was an appearance by MC50, which is Wayne Kramer’s (of the MC5) celebration of the 50th anniversary of the band he founded that helped change the face of music forever. It was a three band bill.

First up was Touched By Ghoul, a local band that featured two ladies and two gentleman. This band had a sound so thick that you’d think they were a six piece. Really great, heavy riffs, coupled with interesting song structures and tempo changes. The female lead singer had quite a set of pipes on her as well. At times their heavy stuff sounded like it would have fit in on the Amrep label had this band been around in that label’s heyday, and that is high praise.  They were tremendous and you all need to seek this band out immediately!

Hailing from Detroit, The Detroit Cobras played the middle slot. Their lead singer seemed rather drunk when they took the stage. They played some interesting garage rock and had some catchy mid-tempo songs. It was pretty entertaining, light-hearted fun.

Last up was the reason why the Metro was packed on a Wednesday night, and that was the MC50. Founding MC5 member, Wayne Kramer, who is an influential rock icon, was joined on stage by Kim Thayil of Soundgarden on guitar, Marcus Durant of Zen Guerrilla on vocals, Brendan Canty of Fugazi on drums, and Bill Gould of Faith No More on bass. You really couldn’t ask for a better group of musicians to share a stage with to pay tribute to such an important band, as each of these gentlemen who joined Wayne were part of important bands as well, all of which were influenced to some degree by the MC5.

This amazing rock supergroup spent well over an hour performing the music of the MC5 that spanned the band’s three album catalog. Singer, Marcus Durant even looked the part of the late Rob Tyner with his big mop of curly hair and sunglasses. Wayne was sporting an American flag guitar and Kim Thayil was laid back and keeping it cool with a ski hat on as he cranked out the meaty riffs. They opened the show with “Rambling Rose”, much like the MC5 used to, with Wayne handling the vocals. It was high on the energy and it got the show started off on the right foot. From there it was one great MC5 song after another, each one sounding even better than the last. The band played the songs perfectly, with a ton of enthusiasm, and the crowd loved every minute of it. The entire audience was a sea of smiles, bobbing heads, and pumping fists.

They kicked out the jams with the second number, and “Kick Out The Jams” is pretty much their most popular song. The music, now fifty years old, sounded as fresh and important here in 2018 as it did back in 1968! “Borderline”, “Rama Lama”, “Tonight”, “High School”, an extended jam version of “Starship” and “American Ruse” were among the many highlights of their flawless main set. Despite only doing lead vocals on one song and backups on various other ones, Wayne was very much the leader and front man of this show, doing windmills on the guitar, playing it high up in the air, and dancing about the stage. For a man in his 70’s, he had an amazing amount of energy and youthful spunk. Rock and roll really does keep you young!

The band returned for a few song encore and had a couple of special guests join them on stage for them. First they had Dan Kubinski of Die Kreuzen join them on vocals for “American Ruse” which he did as a duet with Marcus Durant. Every midwest punk rocker in the audience who was around in the 1980’s hardcore and punk scene popped for that one and he did a great job. When he left the stage, Rick Sims of the legendary Didjits joined the band on guitar for a song! It was very cool that for their Chicago performance they had two guys join them from great midwest punk bands. The band ended the show with their best song, “Looking At You” and man what a closer that was! After they were finished and put down their instruments, they all took center stage for an extended bow and thanked the crowd. The crowd was really the thankful ones though, they just had their faces melted by some high energy rock and roll that changed the life of every single person in that audience in one way or another for the past five decades, and this show was an amazing tribute to it.