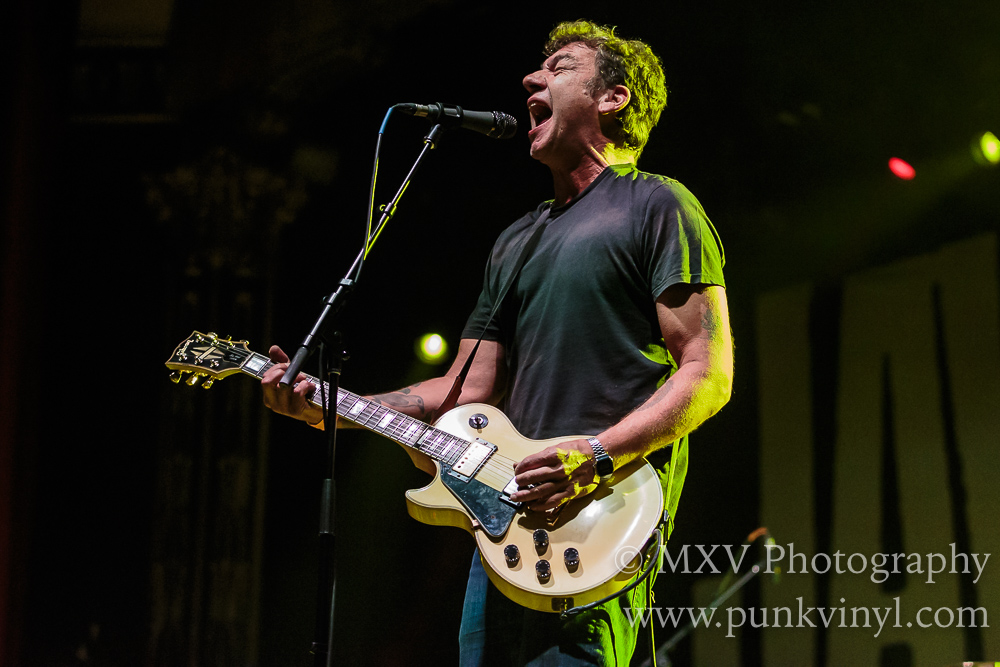 Last night was a punk rock bonanza at the Aragon Ballroom that saw the recently reunited Jawbreaker headline the large concert venue and they were joined by two of Chicago’s most beloved bands from different eras. It was cold and rainy outside but the show was the hottest ticket in town and the action got started early.

Smoking Popes, a Chicago favorite dating back to 1991 took the stage first. They played a familiar set of their staples from over the years and sprinkled in a track or two from their recently released new album. The band sounded good as singer/guitarist, Josh crooned their various songs which are mostly about love. The band is really consistent live and this was no exception and they delivered an enjoyable half hour or so of music.

Chicago punk rock superheroes, Naked Raygun, took the stage next. There is no more beloved punk rock band in this city than Raygun and any time these long time veterans take the stage it is something special. Sadly this time Pierre Kezdy sat this one out but he was there standing on the side of the stage as the band cranked out an hour of one hit after another, along with a brand new song and a couple of the songs from their recently singles. It was a great mix of the old and new and the band really hit their groove around the time of “Peacemaker” and “Treason” (with special guest guitar from Eli Caterer from Smoking Popes) and it kept getting better from there. “Surf Combat” sounded extra beefy and “I Don’t Know” was spine tingling. The crowd loved every minute of it and between songs, a woman in the crowd yelled out asking if they could play their entire set a second time. It is impossible not to enjoy a Naked Raygun performance. Over the past four decades these guys have put on some of the best shows the city has ever seen and hopefully they have some gas left in the tank so we can get another show or two from them before the sad day comes that they retire and go into the punk rock hall of fame.

Speaking of hall of fame, Jawbreaker is another hall of fame worthy band that is special to a lot of people for many reasons. When the band started, they were something special from the get go and they only continued to higher forms of greatness before imploding and breaking a lot of people’s hearts because of their breakup. In the two and a half decades that passed, the band’s following grew to enormous sizes and they became far more popular than they ever were before breaking up. Now a year after the reunion show no one thought would happen, the band returned to the city that got them back together and completely topped their performance at last year’s Riot Fest.

Immediately into the opening track, “West Bay Invitational”, it was apparent that the band has once again hit their stride after playing out semi-regularly the past year. This year’s Jawbreaker was free of any rust and sounded like a band back in their prime. The band played thirteen songs as their main set, featuring songs from three out of their four albums (they played nothing off of Unfun) with the emphasis being on the 24 Hour Revenge Therapy and Dear You material. “Chesterfield King” was an unexpected surprise and half the audience was singing along to the chorus. “Kiss the Bottle” was a real highlight and “Parabola” made another appearance in the setlist this year. The band didn’t waste much time between songs aside from a bit of small talk from Blake on occasion, they instead just got to work and put on an amazing set that ended with a wonderful performance of “Accident Prone” (aka: the best song on Dear You) before leaving the stage.

They came back for a three song encore that featured “Boxcar”, a spine tingling “Ache” and concluded with “Basilica”. It was an amazing performance from start to finish and the only flaw was it wasn’t three hours longer! They easily gave everyone their money’s worth, as did Naked Raygun and Smoking Popes, and it was a hell of a way to end the weekend!