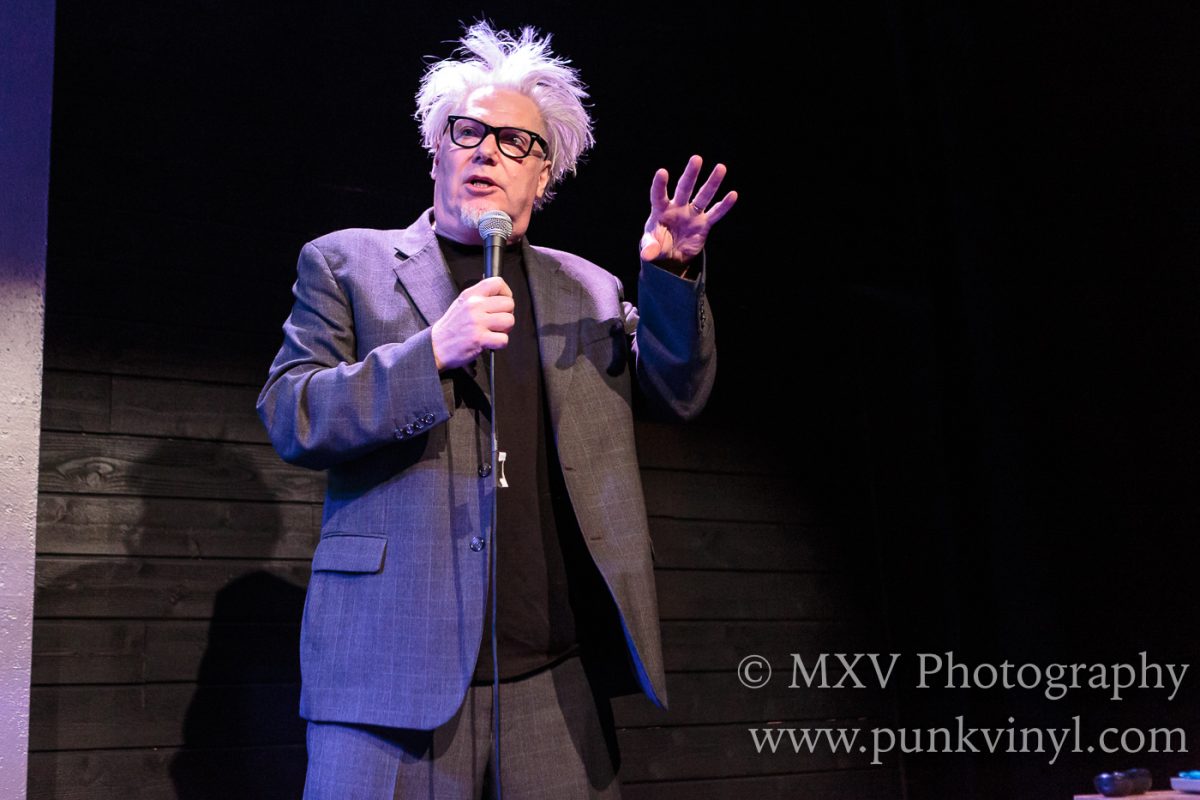 Martin Atkins – Memories: My Time In and Out of Public Image Ltd. 12/2/18 at Cards Against Humanity Theater

Martin Atkins is one of the most fascinating people to come out of punk rock. At the tender age of about 19 he joined Public Image Ltd, one of the most unique and influential bands of punk’s formative years. Martin is also one of the best drummers to ever come out of the punk/alternative rock scene. On top of being in one of the most well-known punk/post-punk bands of all time, he also has played with such amazing bands such as Killing Joke, Ministry, Nine Inch Nails, and of course, Pigface. The man has reinvented himself multiple times over the past few decades and few have taken the DIY ball and run with it like Martin has. This resourceful man is the living embodiment of the DIY ethic and has been a drummer, record label owner, manager, teacher, father, and who knows what else. The man could tell you stories for days about things he’s done and been involved with and never run out of new stories to share, and he’ll leave you eager to hear more.

Martin is in the process of writing his newest book, Memories – My Time With Public Image Ltd. and instead of releasing the book first and then going on a book tour to promote it, in true Martin fashion he is going against the norm and went on tour first to tell some of his PiL stories in person in a wonderful audio/visual presentation. The small Cards Against Humanity theater (a really nice and intimate venue) was full with fans and friends eager to hear Martin’s stories about his time in PiL. For those who aren’t familiar, Martin was the drummer in PiL from between Metal Box (he joined at the tail end of that album) and This Is What You Want, This Is What You Get. He was there for the band’s best work and was easily the best drummer the band ever had.

Martin is a great speaker, he knows how to keep a crowd interested and laughing and keeps them wanting more. For over two and a half hours, Martin took the audience on a trip down memory lane as he told the story about when he started playing drums and how that led to him auditioning to be the new drummer in PiL. Once there, he walked us through the PiL story from the release of Metal Box, through the various live performances, television appearances, recording sessions, and his firing, re-hiring, and quitting the band. Through the journey we learned about various people who were involved with band and their record label and all of it was accompanied by an amazing collection of photos from those days. It was incredible to see pictures of the various artifacts Martin saved all these years as well as various photographs of the band that he was able to locate, or that he had.

Martin’s storytelling abilities are top-notch. He constantly had the audience laughing but he also had them near tears when he’d get serious. If all that wasn’t enough, Martin’s drums were set up on the stage and during the parts where he was talking about PiL’s music, he went over to the drums and played the drum parts to these songs! As a fan, getting to sit a mere six feet away from his drum set while he played his drum part of “Four Enclosed Walls” (my personal favorite PiL song) was a treat I’ll never forget (and thankfully Martin provided earplugs because he beats the shit out of his drums that we were sitting in the danger zone where the sheer force of the snare drums would have likely destroyed us). He even had a young lady accompany him on stage playing cello along with him as he played much of “Flowers of Romance”! No one who showed up to this speaking performance expected to also get to hear Martin play the drums of PiL too!

At one point during his talk, Martin alerted the audience that he had about twenty minutes left. It seemed like he’d only been talking for a short time but at that point it had been a little over two hours that had elapsed already! The time just flew by in an instant because the stories were so captivating and entertaining that no one was looking at their watches or their phones. He could have gone on for another three hours and no one would have left their seats.

When Martin ended his talk, a little over two and a half hours had passed and it felt like a time warp as it felt like there was no way that much time had passed. It was an amazingly entertaining and informative talk. It is really rare that you get to hear some history of a band straight from one of the members of said band while sitting a few feet away from him. As good as this was, he really only scratched the surface of the stories that will be contained in the book and this just cemented the fact that Memories is going to be a must-read for anyone who is even mildly interested in PiL or Martin Atkins. Hopefully it won’t be a long wait for the book to come out!

If Martin Atkins ends up doing any more of these, sprint, don’t walk, to go see it, it will be the most entertaining speaking engagement you’ll likely ever witness and it will send you home smiling.