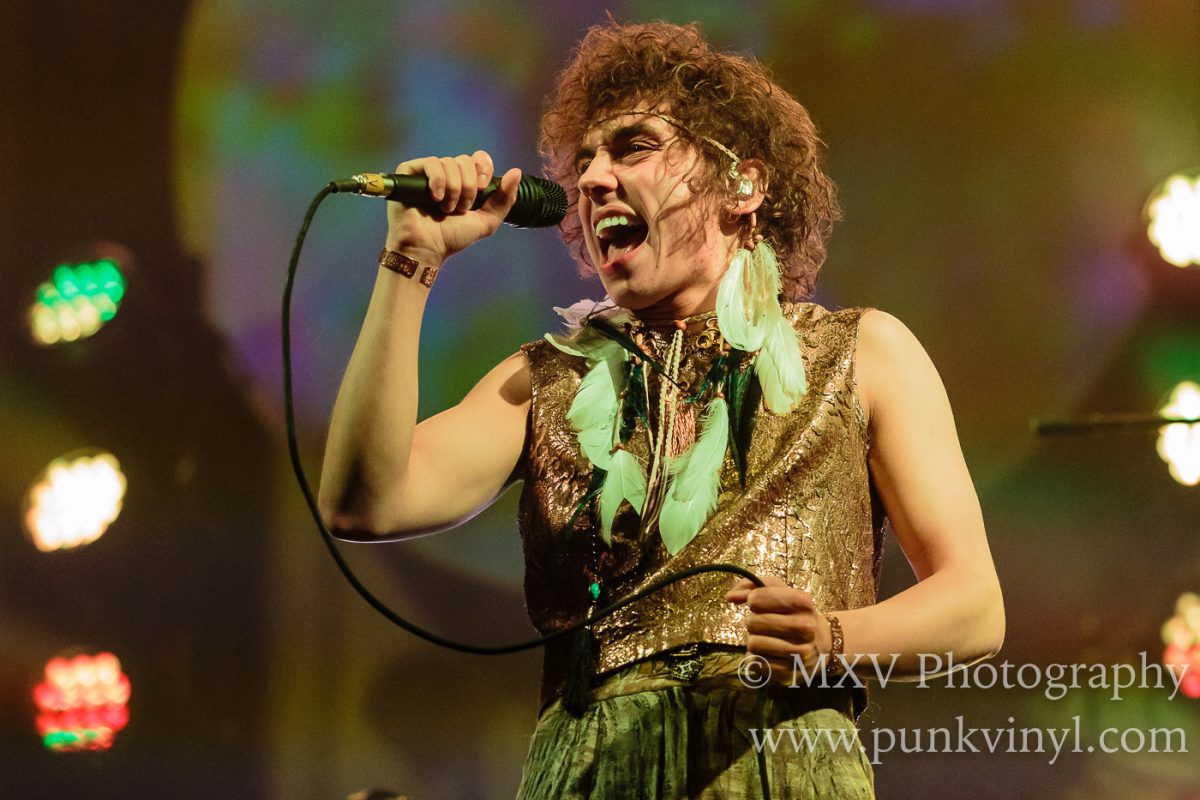 Wednesday night Greta Van Fleet kicked off the first of three headlining shows at Chicago’s Aragon Ballroom. The Aragon has been doing large rock and roll shows for decades so the venue was the perfect locale for a band such as Greta Van Fleet.

First up was The New Respects. They were a multi-piece Christian soul band with really catchy songs, a positive vibe, and great musicianship. The band is comprised mainly of siblings and you can tell musical talent just oozes from the family. They played for a half hour and had people clapping and singing along with their smooth sounds.

When Greta Van Fleet took the stage they apologized for the delay but it was due to the fact that there was still a long line out the door of people waiting to get into the club to see them play. They weren’t kidding either as the Aragon Ballroom was absolutely packed from front to back and the balcony was full too. There were people as far as the eye could see in every direction and a huge portion of the crowd were younger folks, which makes sense given that the band members themselves are also quite young. Their young age certainly has no bearing on the band’s ability to rock as these guys played like well seasoned rock veterans and had all the showmanship to back it up.

They opened the show with “The Cold Wind” and it was immediately noticeable that the sound for these guys was way better than usual for this large venue. The mix sounded full and really clear. The singer tossed out roses to the sea of mostly female fans sandwiched up against the front barricade and they all screamed their heads off as they tried to catch them. The band sounded really tight and the vocals sounded great.

Greta Van Fleet get compared to Led Zeppelin a lot and there’s a lot of similarity to their sound, and that’s not at all a bad thing. It was refreshing to see a rock band, especially one with such a retro vibe to it, draw such a huge, younger audience in a musical climate that is overrun with mainstream, manufactured autotuned to the moon and back, processed, disposable pop songs. Sounding like a 70’s arena rock band is a much-needed and welcome thing and it’s wonderful to see the band gaining so much popularity and drawing such large crowds to their shows. And speaking of arena rock, their performance had all the staples of the great arena rock shows of yesteryear including great light shows, smoke, and trippy visual effects projected onto the backdrop, all while the band delivered one great tune after the next.

Also like the classic rock shows of us older folks’ youth, Greta Van Fleet spiced up some of the songs a bit with solos, extended jam parts and longer intros. It was a true rock and roll show through and through. Their main set, at over an hour in length, featured a fair amount of material off their most recent album, including “When The Curtain Falls”, “Watching Over” and “You’re The One” and a few from their previous EP’s, before ending with an extended “Edge of Darkness”. After taking a break for a few minutes they came back out for a two-song encore that was made up of “Lover, Leaver” and Highway Tune”. It was a great way to cap off an amazing rock show!