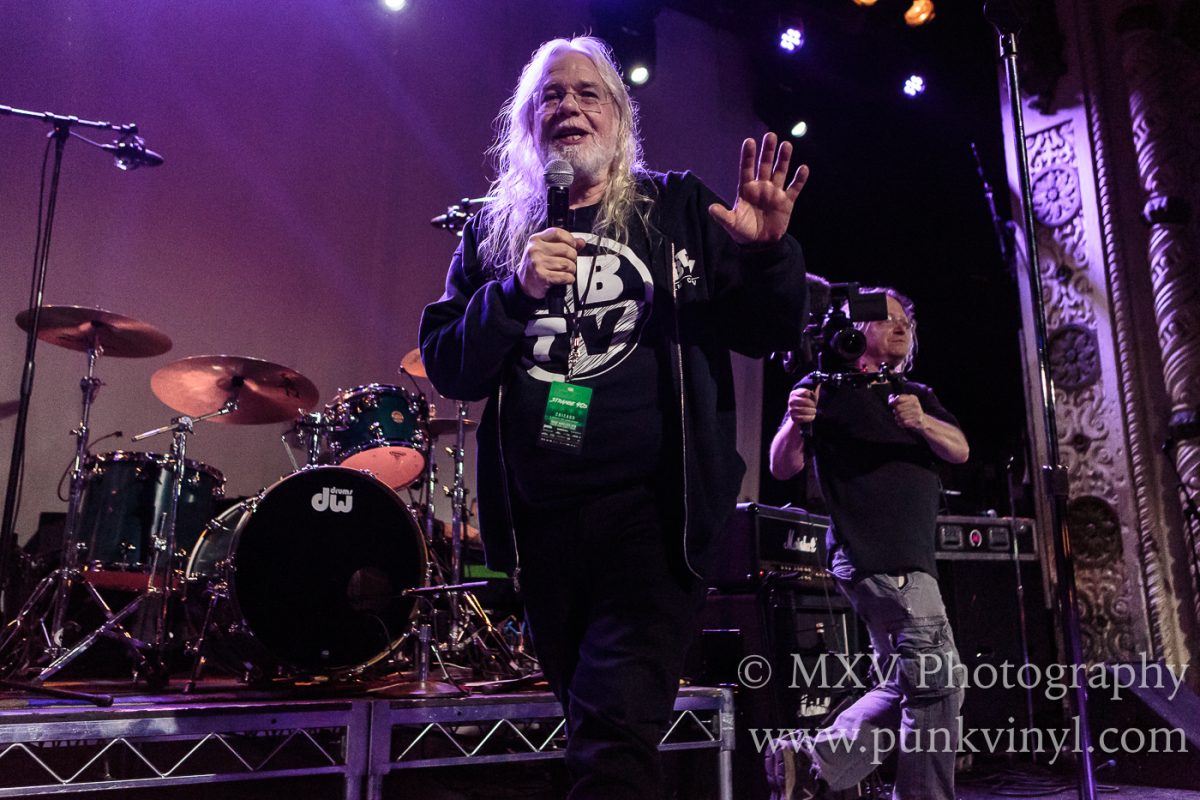 Jerry Bryant has been a staple and a supporter of music, and the Chicago music scene, for 34 year now. The man, and his JBTV show has been showcasing great bands, including lots of up and coming bands, longer than anyone. While MTV may have been the first music video network, they threw in the music towel and became just another cable channel while Jerry kept his weekly, one hour music video show going for over three decades and counting. JBTV helped break many up and coming bands and the show featured all the great music you wished something like MTV would have been playing more often. The show was also a great outlet for up and coming Chicago bands, many of whom appeared on the show. Jerry is a Chicago institution and we are lucky to have him.

Jerry Bryant also recently found out he has cancer and had to undergo a lot of medical treatments in hopes of beating it, this of course led to countless medical bills as despite health insurance, going though something like this can and will still be financially devastating. To support someone who means so much to the music scene, Chicago’s legendary Metro hosted a 90s themed benefit show to raise money for Jerry’s medical expenses. It was a very unique event, which also featured a raffle and auction items, all to raise as much money as possible. The place was very crowded and there was a lot of love and support in the room for Jerry.

Each band or group of musicians played between two and four songs, and each set started within minutes of the previous one ending. Many musicians did multiple sets in a row to provide the music for various vocalists and all the bands were doing covers of popular 90s songs, pretty much all of which were showcased heavily on JBTV. It wasn’t what you’d have expected from these bands/artists but it was a lot of fun and the theme was totally appropriate.

First up was Kontrolled Kaos. They are a local band of young gentlemen from the suburbs. They seemed very excited to be playing on the Metro stage, so much so they had someone take photos of them on it before they started playing. They played a cover of “Higher Ground” that they attributed to being a Re Hot Chili Peppers song but may not have realized that it was actually a Stevie Wonder song that RHCP covered. They did a good job regardless though for their quick, two song set.

Marina City were next. They were high on energy and their singer was dancing all over the place. They did three songs, “Black or White” by Michael Jackson, as well as a TLC cover and a Blackstreet cover.

Medina Lake did a Smashing Pumpkins cover of “Zero” and a pretty nice rendition of Nine Inch Nails’ “March of the Pigs”.

Jimmy Gnecco double the number of songs the other bands were playing for his set. He did four songs, one each by Radiohead, Spacehog, Depeche Mode, and finally Soundgarden. This was one of the better sets of the night.

Lizzy Plapinger, aka LPX, was a real highlight of the evening. She was full of energy and great vibes, had a great attitude and an infectious smile. She was absolutely adorable and did a Le Tigre song, one by Fiona Apple, and ended with a fun version of the Alanis Morissette hit, “Hand In My Pocket”. This was easily the most fun set of the night.

A band that definitely got their break due to JBTV was Kill Hannah and they played two of their own songs (since they were a 90s band) that sandwiched their cover of the Smashing Pumpkins hit, “Cherub Rock”.

Plain White T’s Tom Higgenson came out with an acoustic guitar to do their songs, “Hey There Delilah” before being joined by some of the musicians who had been backing many of the previous acts for two more songs, a Weezer tune and another Smashing Pumpkins tune.

Local H took the stage for a very good, five song set which featured the band’s big hit, “Bound for the Floor” as well as four covers, one each by Radiohead, Blur, Oasis, and Screaming Trees. This was another highlight of the evening for sure.

Andrew WK came out to play one song to show his support for JB. He didn’t bother with any covers, he simply did his big hit, “Party Hard” and it was excellent.

Chicago punk rock superheroes, Naked Raygun, played last and played the longest set of the night. They did eight cover songs, a few of which were not from the 90s. Their selections included songs by The Smiths, Oasis, Jesus and Mary Chain, Buzzcocks, Flaming Lips, Mott the Hoople, and Stiff Little Fingers. They ended their set with one of own songs, the amazing “Vanilla Blue”. The crowd wanted more when they left the stage so they came back a couple of minutes later to play two more of their classics, “I Don’t Know” and “New Dreams”. The crowd went crazy for both.

When Naked Raygun left the stage, the show had clocked in at well over four and a half hours. A lot of money was raised for a wonderful man who is loved by the entire music community, and the audience had a lot of fun. It was a great show of support and proved what a great music scene Chicago has when so many people gathered together to help out one of our own.