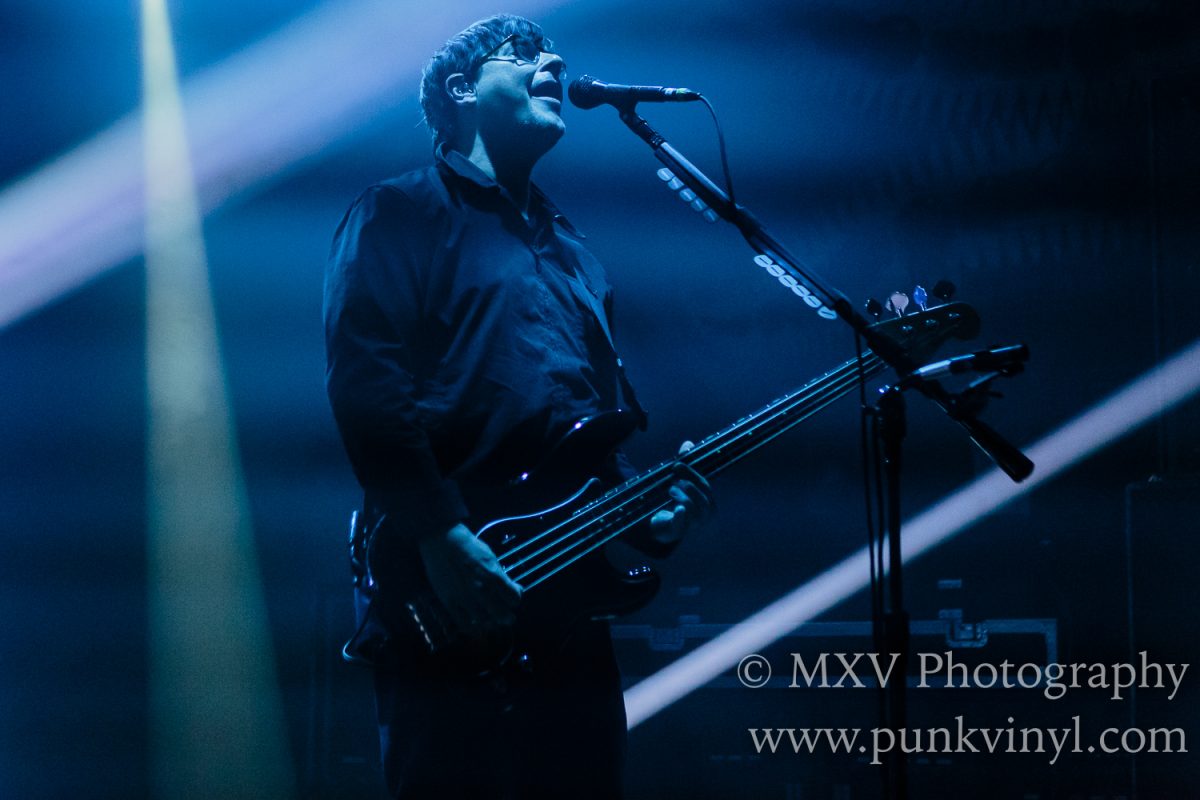 Failure and Swervedriver 4/5/19 at House of Blues

If you like your rock music with loud, layered guitars, full of complex riffs and atypical song structures then there was no better place to be Friday night than the House of Blues in Chicago where two great bands, Failure and Swervedriver, teamed up to co-headline a show. The two bands compliment each other being on the same bill but are very different from each other and it was an exciting show.

Swervedriver formed 30 years ago and in the early to mid 1990s became pretty well-known and were a popular group associated with shoegaze music. They called it quits a decade later and close to 20 years after that, they reunited once more to tour and recently released a new album that was very well-received from longtime fans. Their live shows were always top-notch back then and time hasn’t changed that one bit. They opened their set with “Mary Winter”, which is the first song of their new album, Future Ruins. The band sounded in fine form and they wove a web of thick guitars that mesmerized the audience. The stage was awash with bright lights from behind. They wasted very little time between songs and immediately followed up the first song with the second one from Future Ruins. In fact, their set was heavy on the new material but they sprinkled in a few older songs here and there and all of it sounded great. If you overlooked this band in the past you owe it to yourself to check Swervedriver out now as they are as good as ever and their live performance this evening easily warranted the price of admission alone.

Another 90s band that recently reunited and started putting out new material, Failure, closed out the evening. Since reuniting, the band has released two excellent new albums and seems to not only have reclaimed their former audience, but picked up a new following along the way. People who overlooked them the first time around are finally catching on to how great these guys are, and how hard it is to accurately describe them. This three-piece makes a sound as complex and as full as a band with twice as many members and instruments, and they make it look effortless while doing it.

Failure got their set started with “Solar Eyes” off their brand new album, In the Future Your Body Will Be the Furthest Thing From Your Mind. The stage lighting was bright and backlit which wasn’t conducive for photographing the band, but looked great to the audience and really complimented the music beautifully. In fact, their lighting director should really be considered the fourth member of the band as the stuff she did really added a great layer to the performance and was like a visual instrument. Their sound guy also deserves a mention as the sound for Failure’s set was nothing short of incredible. It sounded like a high-end studio recording, everything was mixed perfectly and sounded so clear and full. The House of Blues always had good sound but nothing has ever sounded so incredible as Failure did this evening.

The band didn’t stop very long between songs and they don’t move around much, but it could be largely due to the complex nature of their music. When you really remove any distractions and concentrate on what’s going on in their songs, you really hear how they really found a way to take complex and abnormal riffs and grooves and put it together in such a way that their sounds are equal parts powerful, heavy, and really catchy. They have such unique hooks in their songs and a cool atmospheric element to their sound that will suck you in out of nowhere and keep you hooked for the duration. Everything they played sounded even better than their already great records and it kept you begging for more.

The set was made up mainly of material from the two new albums, as well as Fantastic Planet. They hit all the sweet spots giving attention those records and even did a couple from Magnify, but didn’t play anything from Comfort before leaving the stage, ending the main set with “Spiked Flower”. A few minutes later they took the stage for a two song encore. Singer/bassist, Ken Andrews, announced to the crowd before starting the encore that they covered material from the last three albums but haven’t played anything from the first one yet, at which point they played two songs from it, starting with “Macaque” and ending their show with an amazing rendition of “Screen Man”, the best song from that album. It was one hell of a way to cap off what was a perfect set of material, played beyond perfect, that showcased the band’s entire career and still left you wanting more. Failure is easily one of the best live acts you can see these days and their stop here in the windy city was nothing short of phenomenal!