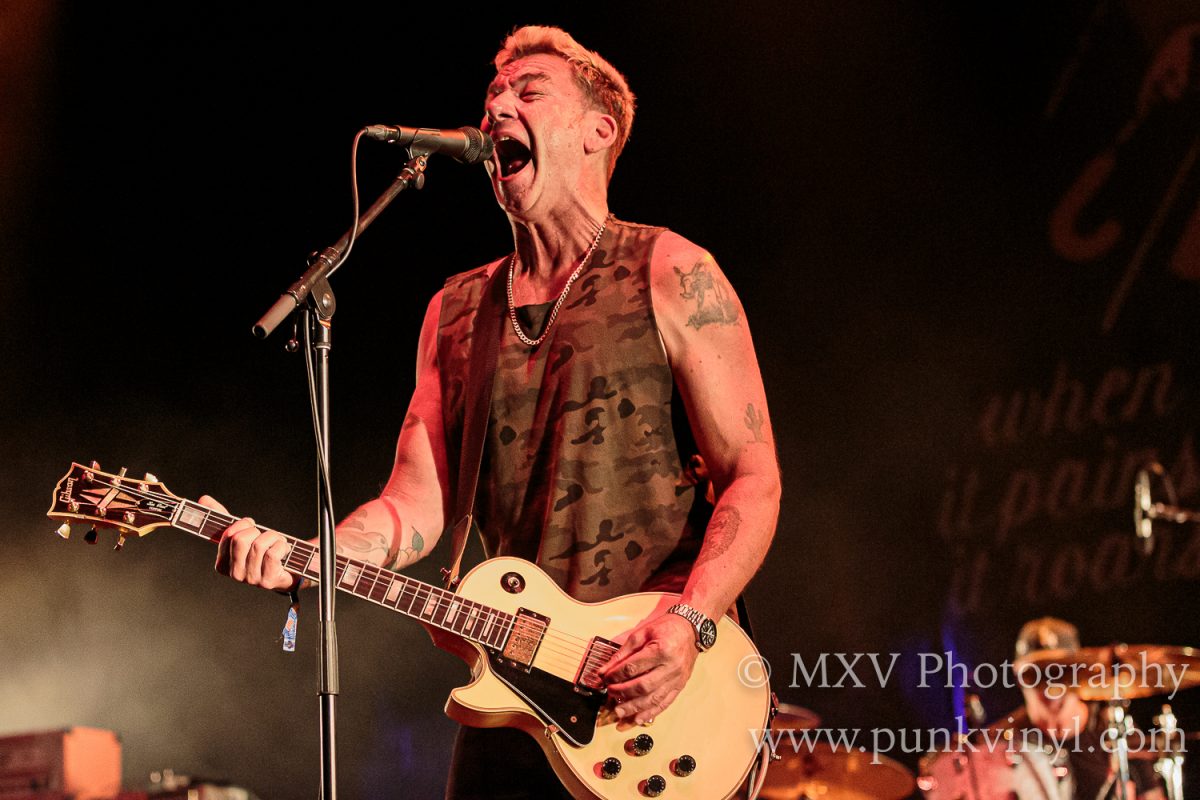 Summer is nearing the end which means only one thing, Riot Fest! The last hurrah of the summer celebrated its 15th birthday last weekend and they really put together an amazing weekend of music with a really diverse lineup that saw familiar acts of the past making another appearance along with plenty of great acts who were playing the fest for the first time. One would have to really hate music to not be able to find a few bands every day that appealed to them.  The festival once again was held in Douglas Park, which the Riot Fest folks have found the near perfect layout for and navigating from stage to stage was very easy and it only took a few minutes to get from stage to stage. There was the usual carnival rides and plenty of really great food options. They also had merchandise tents, raffles, giveaways, and even professional wrestling! Since the music is the biggest draw though, let’s focus on that.

Anti-Flag got things started pretty early, making a return appearance to the fest. They had so much energy they practically jumped onto the stage when they came out to perform, and during that performance they did do a lot of jumping. The bass player was airborne as often as possible and all the members of the band were constantly moving about the stage in between their various vocal parts. Speaking of vocals, they had a lot of singalong choruses that had the large audience singing along with while they were jumping all over each other in the pit. If this band could figure out how to bottle and sell their energy and enthusiasm, they’d be billionaires.

Hot Water Music is another favorite that made their return after a few years and the time away seemed to re-energize them. They sounded better than any of their previous Riot Fest performances and the huge crowd they drew went nuts for them. They are one of those bands that have such good, catchy songs that it just makes you feel good when you see them play.

Hot Snakes are back after a two year absence from the fest and their tight wall of guitars knocked the crowd on their asses. Whoever was handling sound for them, and the main stages in general should be given a raise as the sound this year, and especially for Hot Snakes was spot-on! These guys had such a thick and punchy sound that you felt in right in your bones in a good way, and they were just so tight that it was impossible not to be blown away by the entire set. They played some tracks from their latest album, and threw in a good mix of stuff from the older records as well. It was intense.

Cock Sparrer had a massive crowd come out to see them and it seemed that nearly all of them knew the choruses to all of their songs. They played a lot of their old hits and it seems that the older they get, the larger their fan base grows. UK working class punk rock at its finest that caters to the boots and braces crowd.

Next up we had ’80s alternative rock darlings, Violent Femmes. This time out they played a couple of new tunes and filled out the rest with some had old favorites. Their new stuff sounded good live, and the old favorites always sound good and were a real crowd pleasure, especially, “Blister In The Sun” and the set closer, “Add It Up” which the crowd was singing along so loud to, it nearly drowned out the band!

Dashboard Confessional had an audience that skewed younger than many of the acts that played on Friday, but they turned out in droves and swooned to their soothing emo sounds. After a bunch of loud and fast punk rock, Dashboard’s pop songs made for a nice change of pace for an hour and the kids went nuts for them.

One of the greatest punk rock bands of all time, and one that has transcended generations, was back for another Riot Fest and were welcomed with open arms by a crowd so big that it didn’t really fit in the space surrounding the stage. Descendents put on a clinic of how to put on a powerful performance as they played nearly nonstop for the hour they were on that stage. They just cranked out one hit after another, playing so many old favorites and a handful of songs from their newest album and each song sounded better than the last. How this band plays better the older they get should be one of the great wonders of the world, and they make it look so easy. The crowd went absolutely crazy for them and people were dancing, crowdsurfing and singing the entire time. When the band was done, the people wanted more! If they were able to go another hour, not a single person would have left the area and they’d probably still want more! All hail the Descendents, they should be required to play the fest every single year.

Even if you don’t like their music, it is hard to not like seeing The Flaming Lips play live. They are so visually entertaining that they’ll have you mesmerized the entire time and the next thing you know and hour or more of time has passed by. There was balloons, candy colored lighting, cool visuals, confetti, smoke, quirky songs, a life-sized inflatable ball that Wayne Coyne walked over the crowd inside of, and so much more. For this year’s fest, they played their entire Yoshimi Battles The Pink Robots album and many of those songs they hadn’t played in many years. They were one hell of a fun trip.

Closing the first night of Riot Fest was the legendary Jawbreaker. Just two years prior, the band reunited to headline Riot Fest after being broken up for two decades, and thankfully they’ve stuck it out and have been playing shows off and on ever since. This is the third time the band has been in Chicago since reuniting and the past two years of shows seemed to rejuvenate them as this performance easily eclipsed their previous two. They band seems to be firing on all cylinders now and Blake especially seemed more enthusiastic than before. They played a similar set to their last outing, focusing mainly on material from Dear You and 24 Hour Revenge Therapy. A couple of real standouts in how great they sounded were “Boxcar” and the final song of their set, “Kiss The Bottle”. They were truly magical Friday night and it is so good to have them back! Hopefully they keep going and dip more into some of the older stuff in the future and even better, entertain writing some new material. The world is a far better place for Jawbreaker being back together again.

The first day of the 15th Riot Fest was as perfect of a day as you could ask for at an outdoor festival. Great music, great weather, and great people made it all wonderful, and there was still two more days to go!