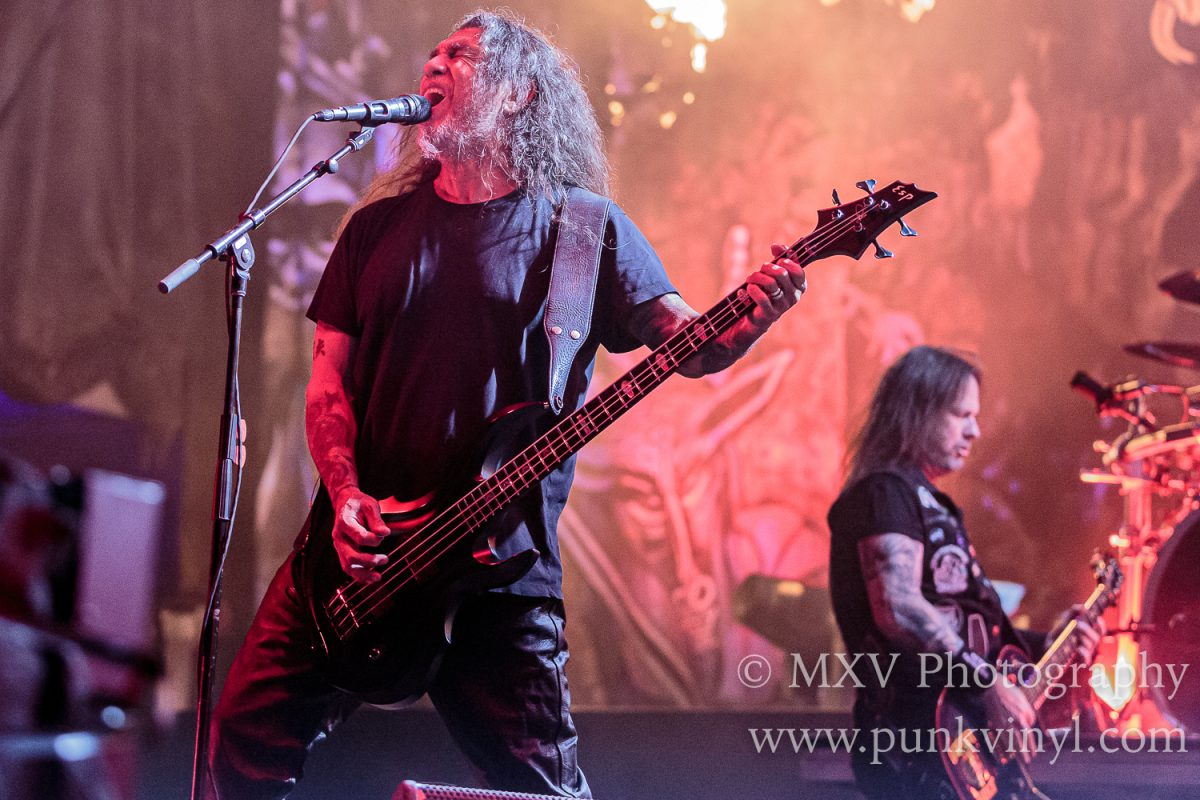 Saturday was a beautiful day for an outdoor festival. It was sunny and warm, but not too warm, and Riot Fest had an amazing lineup of bands spread across five stages. This was the day that was heavy on the heavy metal, with three legendary thrash metal acts taking the stage throughout the day, plus there was a plethora of other types of bands throughout the day as well.

Avail made their return after at least a 12 year absence and the people were very excited for it. These Richmond natives followed right after some of their neighbors, Gwar, finished on the stage next door. One of the members of the band had a super soaker and was shooting the crowd with water, which was probably much appreciated as the sun was beating down on them. If you hadn’t known the band had been inactive so long you’d never know it by how they played. They cranked out one classic after another and showed no signs of rust. The huge crowd went bonkers during the entire set. They were great, and it was sure nice to have them back. Hopefully they will stick around!

Cursive was playing over at the Rise stage. They had a really interesting sound that mixes DC style post-hardcore emo with shoegaze. The singer had a great voice for their musical style and they sounded like no one else the entire weekend. If you are a fan of the later Dischord emo/post-hardcore style of bands then these guys would be right up your alley. They even had a cello player!

The first of three legendary thrash metal bands took the stage next and that was Testament. These guys have been active for more than three decades and they are wizards at what they do. Super heavy and fast riffs, machine gun drumming, and great leads set the bed for the raspy and powerful vocals that gets laid on top of it all. Hair was flying, heads were banging, there was a huge mosh pit, and the crowd went wild. If you’ve never seen Testament you need to fix that, they are always great and are great showmen on top of it.

The Story So Far had the unenviable task of following Testament. Their pop-punk style of music, which is really way more pop than punk was a huge change from what just took place and drew a much younger crowd. Their songs were catchy and they put on a solid performance that the kids seemed to really like.

Considered one of the “big four” thrash metal bands (along with Metallica, Slayer and Megadeth), and certainly the most fun of the four, Anthrax took the stage next. These guys are one of those bands who get better live the older they get. How they can play with even more energy than they did over 30 years ago when they wrote many of the songs they played is a true mystery, but they do it every time! They opened with one of their best songs, “Caught In a Mosh” and played a mostly greatest hits set from there. A huge amount of the crowd was caught in a mosh pit for the entire set, and these guys proved why they are in the elite top four thrash metal bands. They looked and sounded great and are still a must-see every time they come to town.

Rise Against gathered an audience that went back as far as the eye can see, and they were so excited even before the band started that they were crushing each other trying to get closer to the stage. One the band hit the stage it was a sea of flying bodies the entire hour they played. It’s a strange phenomenon that this melodic pop-punk music elicits such chaos among their audience but these kids were jumping all over each other and crowd surfing non-stop. The security guards never got a moment to rest during the entire set. The band sounded great, even better than the last time they appeared at the fest.

One of the greatest heavy metal bands ever took a stage in Chicago for the final time to end the second night of the fest. Slayer is winding down their farewell tour and they certainly aren’t coasting to the finish line. They are playing with as much fury and power as ever, and they delivered 90 minutes of metal perfection. They hit many of the favorites, even dipping back into the first two albums with songs like “Hell Awaits” and “Chemical Warfare”. There was crazy pyro all over the stage, even shooting flames sideways and diagonally! Lots of flashing lights and smoke made it hard to see the band at times and the music was so loud and so powerful that it would knock you on your ass. They played a whopping 20 songs, spending very little time in between each one and not saying much either, they just got down to the business of melting faces. When it was time to call it a night, they ended their last ever Chicago show with “Angel of Death” and then left the stage for good. It was one hell of an amazing send off and they will be sorely missed, but we can take comfort that they went out while still on top and had an amazing run that lasted nearly four decades. Goodbye Slayer and thank you for the decades of aggression!

The second day of Riot Fest was every bit as good as the first and it was packed full of people the entire time. Many ventured out to some of the late night shows while others went home to prepare for the final day of the fest. To put it simply, day two was amazing.