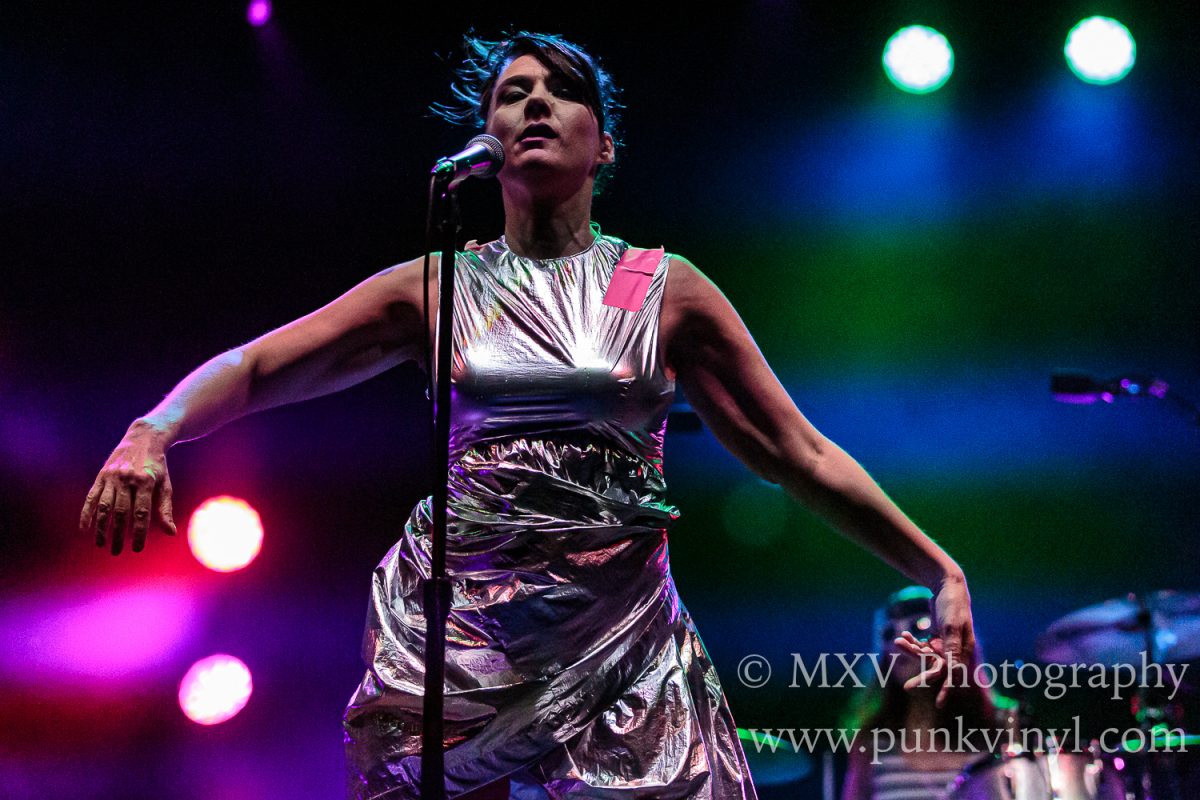 It rained the morning of the final day of Riot Fest this year, but thankfully it stopped before the show got underway. It made for some muddy conditions, but it wasn’t bad at all and the park held up well during the day. The weather was quite comfortable by the time the gates opened for the day and Douglas Park was once again packed full of Riot Festers.

Disco legends, the Village People took made their Riot Fest debut. You might think it is odd for a band like this to be playing a festival largely known for punk and alternative rock but you should have seen the massive crowd that showed up for the band. This Village People isn’t quite the same as the one us old timers remember from our childhood though as it features only one original member. Sadly only one original Village Person is left alive, the cop, and he has newer and younger people playing the parts of the other beloved characters. They did a great job too. You had the biker, construction worker, and the Indian, singing and dancing along and they got the crowd moving in no time. Despite showing up 15 minutes late, the band put a smile on everyone’s face as they played their old favorites like “Macho Man” and of course, “YMCA”. Unbelievably there was crowd surfing and a mosh pit during their set! One can only imagine what these guys on stage were thinking when they looked out into the audience and saw that, but it certainly didn’t slow them down. They were a lot of fun.

Shoegaze legends, Ride, were up next. Ride was a big deal in the early 1990s when the shoegaze style of music became popular and they were among the cream of the crop of that scene. Sadly they called it quits two decades ago, but like all great bands, got back together recently. They have put out two very good albums since reuniting and the latest one is what got them out on the road. The band played a couple of songs from that album before dipping into their back catalog and busting out some classics. The sound for their set was incredible, and they played flawlessly. It was a little surprising and disappointing that more people didn’t come see them play than what showed up (it was still a large crowd), but it was their loss for being foolish enough to skip this as Ride were great. If you liked them in the past they are every bit as good as ever and their new material is quite enjoyable. They need to come back to the festival again sometime and give more people a chance to see them who missed out this time.

Local act, Sincere Engineer played their first Riot Fest this year. The band, led by the adorable Deanna Belos, put out an amazing debut album last year that has been getting a lot of attention and was very well received and the band has been playing and touring ever since. All the time spent playing gigs really showed as they commanded that Riot Fest stage like a bunch of veterans and a huge crowd turned up to see them. Don’t be surprised if you see them play one of the larger stages at a future Riot Fest. Deanna’s voice sounded great, the crowd knew the songs and sang and danced along, and people even brought them corn dogs! It was a wonderful performance and it was great to see so many people show up to see it. Put this band on your radar immediately.

The B-52’s are such a natural fit for Riot Fest that it is really hard to believe that they never played the fest until now. This quirky punk/new wave/alternative band sounds like no other and had a long history of writing catchy, yet odd songs. These guys and gals have been around for four decades now and while they may be old in calendar years, they still sing and sound like they did when they were young. They all sounded great and played a set chock full of favorites spanning much of their catalog. They danced around the stage as the crowd did the same out on the grass. They played a dozen songs and highlights included “Roam”, “Private Idaho” and of course, “Rock Lobster”.

Ween made their return to Riot Fest after a couple of years away and delivered another set of their oddball alternative rock. They sounded really good and were a lot of fun. They played about a half dozen songs before playing The Mollusk album in its entirety.

Riot Grrrl pioneers, Bikini Kill, reunited to close this year’s festival and they played to what could be the largest crowd of their career. People went back farther than the eye can see and the thousands of people near the front of the stage were especially excited. They opened with “Carnival” and wasted little time between their fairly short songs. They kept cranking them out as Kathleen Hannah bounced around the stage belting our her trademark screechy vocals. They sounded really good and I think I can speak for tens of thousands of people who were there that night when I say they’d really be welcomed back and they should consider sticking around. Getting them to play again was a big deal and it was a great show closer.

Sadly Riot Fest 2019 came to a close, just as summer is about to come to an end. As always the festival lived up to or exceeded the high expectations and it will be a long cold winter as we wait a year to all get back together and do it again. Happy 15th birthday Riot Fest, you are only getting better with age!