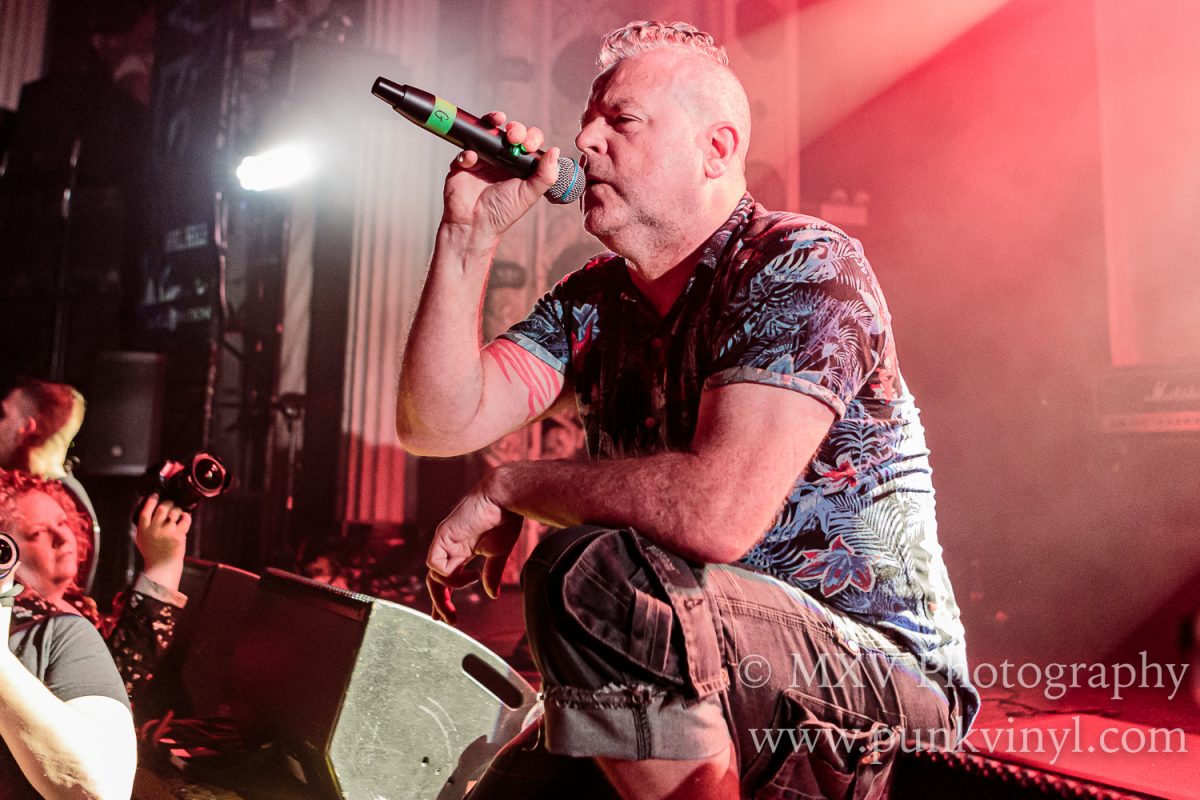 The Cold Waves festival somehow is already eight years old and this year, all four nights took place at the legendary Metro here in Chicago, which has hosted six out of the seven previous Cold Waves. What started as a tribute to Jamie Duffy has evolved and grown over the years but eight years later he’s still fondly remembered and missed and the festival started in his honor brings together legions of industrial music fans from all over to a club that was a mainstay of that music scene over the years. This year’s fest had a handful of returning favorites along with some great newer acts.

Curse Mackey has been a staple of the industrial music scene for decades now and is known mainly for his work with Pigface and Evil Mothers. He has participated in the Cold Waves fest in various capacities over the years and this year he has a new solo project he debuted. He was a one man show with a rack of instruments and a microphone. His set mixed some gothic rock with the industrial machine rock style he’s known for, but it was a bit more danceable and accessible. It was a really good set and Curse likely has a bright future ahead of him with this project as it really stood out as one of his better ones (and he has a great track record too). Between his work with Pigface, this solo project, subbing for Peter Murphy at a show, and everything else he has his hands in, Curse is going to be the industrial Dave Grohl with all he has going on.

Next up was Acumen vs. 16 Volt. This was a sharing and blending of two bands: Acumen Nation and 16 Volt. The set started off with 16 Volt playing their songs for about 16 minutes, then Acumen came out and the band morphed into that for a half hour of Acumen songs, from there 16 Volt returned, and so did a guest vocalist or two (including Curse Mackey!). The 16 Volt portion of the set was the best one and their industrial machine metal sounded as good as ever. The Acumen portion was high on energy and fast beats, and kept the pace and the noise going pretty much non-stop for their entire portion of the set. It almost sounded like one thirty minute song. Total run time for this tag team bout was one hour. Since both acts have played Cold Waves in the past, it was a neat concept to make it different this time around.

Chemlab played what was then their last show ever at the first Cold Waves, only to reunite six years later at the seventh Cold Waves. No one knew at the time if that was a one-off or if they’d continue but we now have our answer as they not only played Thursday night, but they upstaged everyone. For as good as they were last year, this year’s performance put that to shame. It was 45 minutes of non-stop fun. The band and audience had a ton of energy. Seemingly out of nowhere the crowd had a ton of beach balls they were throwing around the club, people were dancing, Jared was jumping down to sing with the audience, and they played a set chock full of their most popular songs. In between songs, Jared told stories and chatted it up with the audience and was very entertaining. At one point near the end of the set he covered his hands and face in paint and painted some canvases with his body while talking to the crowd. During one of his many spiels he shared the good news that not only will the two Chemlab albums finally be given their first vinyl releases next year, but there will also be a new Chemlab album! Their set was easily the best of the night and they really should have been the headliner.

Pop Will Eat Itself was the final band of the evening. They played the festival a couple of years ago and this set and the lineup was very similar to that one. For those who may not know, this version of PWEI isn’t the one you remember that put out all those great records. Gone are all the original members aside from Graham Crabb (the other vocalist from the classic lineup) and Mari Byker (of Gaye Bykers on Acid/Pigface fame) has the lead vocal duties. The band played a similar set full of their most popular tunes and had a lot of enthusiasm in doing so, but they didn’t seem as good as the last time and for the purist fan, it is really hard to get past hearing those songs with someone else singing them. They played about ten songs and touched heavily on the most popular singles, the two singers jumped and stomped around the stage the entire time. They played for close to an hour and then it was time to call it a night.

The first night of Cold Waves was a fun night, and worth it to those who were staying out late on a work/school night. The best was yet to come as there was still three more nights for everyone to get together and celebrate this great genre of music.