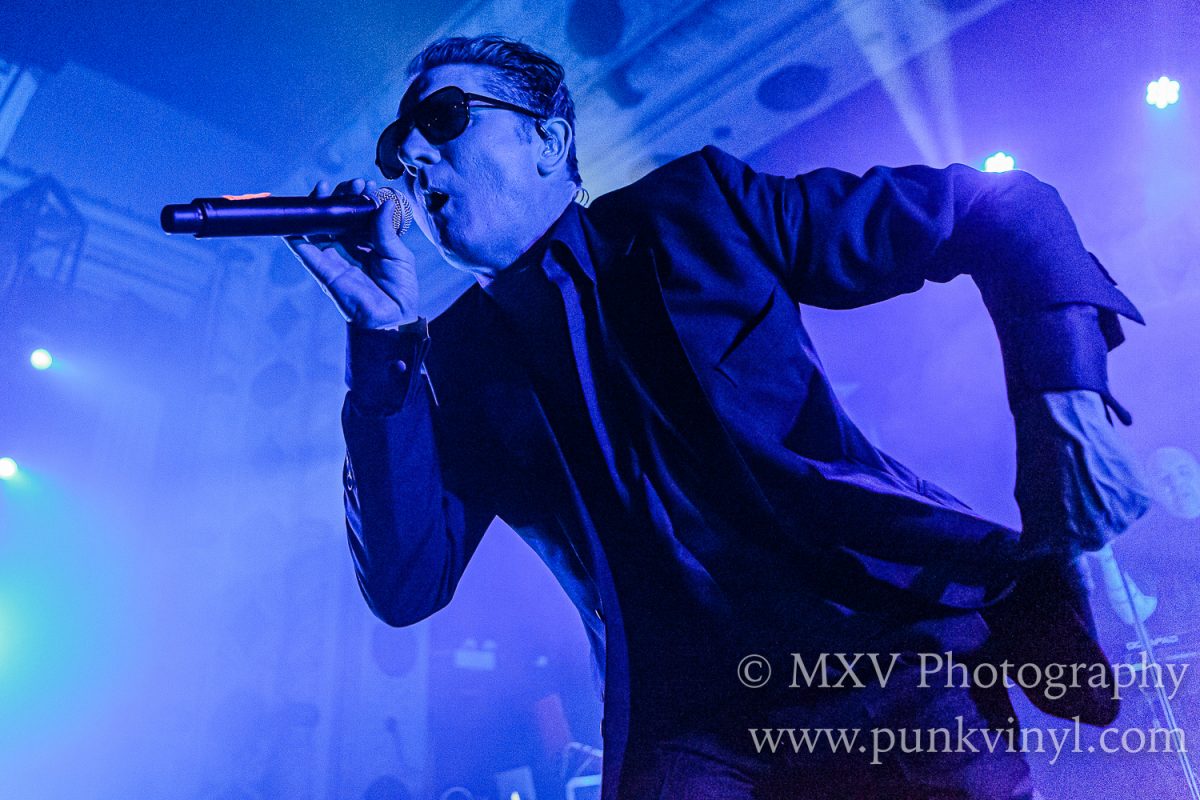 Friday night was the second night of Cold Waves and it was really something special as they had a big name headliner that never played the fest before, and that was the legendary Nitzer Ebb! The night was action packed full of great bands and the Metro was sold out well in advance of the show.

Wingtips is a two-piece band from right here in Chicago. They recently released their debut album and are touring to support it, which landed them on the opening slot for Friday’s show. The band has a strong gothic influence and musically they sounded like a hybrid of The Cure and Xymox. Their songs were really good with moody and ambient guitars and a great dark vibe. The singer had a really great voice for the style of music and their 30 minute set was a really strong one. Very impressive!

Klack was another two-piece band. These guys were far more electronic in nature in sort of a Clock DVA way but with vocals. They both also played various drums and drum pads and both members had these really cool drum sticks that lit up when they struck the drums. Some of their songs were great for the dance floor, as evidenced by some of the crowd enthusiastically moving their feet.

Ivardensphere filled the stage with drums of all shapes and sizes and had twice as many band members than the previous two acts. Their set was largely instrumental and super heavy on the percussion. The tribal pounding by all these musicians was both powerful and hypnotic. It sounded like nothing else on the entire festival roster and they were totally mesmerizing.

Light Asylum was one woman and an iPad. Musically it was dark wave synth with equal parts catchy and aggressive vocals. It was a pretty intense 45 minutes.

Nitzer Ebb took the stage and the crowd was amped up for them. The lights dimmed (and stayed dim, so very dim) and the band filed out on stage to take their various positions. When the music started, singer Douglas McCarthy took the stage which elicited a big roar from the crowd. He paced back and forth incessantly while smoothly delivering his vocals. The band didn’t simply play their material the way you are familiar with, the whole set was reworked with a more techno foundation and they seemed to live mix one song into the next. The meat and potatoes of the band’s favorites were still there, but spiced up with added layers of noise and electronics to put a fresh coat of paint on the old favorites. The pacing of the band’s set list also built upon itself nicely. They started off a bit more subdued and mellow and each song picked up the pace just a bit so by the time they started getting into some of their singles like “Lightning Man”, “Fun To Be Had” and “Control I’m Here” the crowd really got moving and the band really clicked. When they got to “Join In The Chant” the entire audience did just that as they sung along to the chorus as they danced their asses off.

Nitzer Ebb’s 75 minute set saw zero breaks in the action, they never stopped playing and just mixed one song into the next. While it wasn’t the traditional style of performance, it was really solid and strong performance that left the crowd tired and sweaty when it was all over. It was great to have this legendary band be part of a Cold Waves show and closed another great night of the fest.