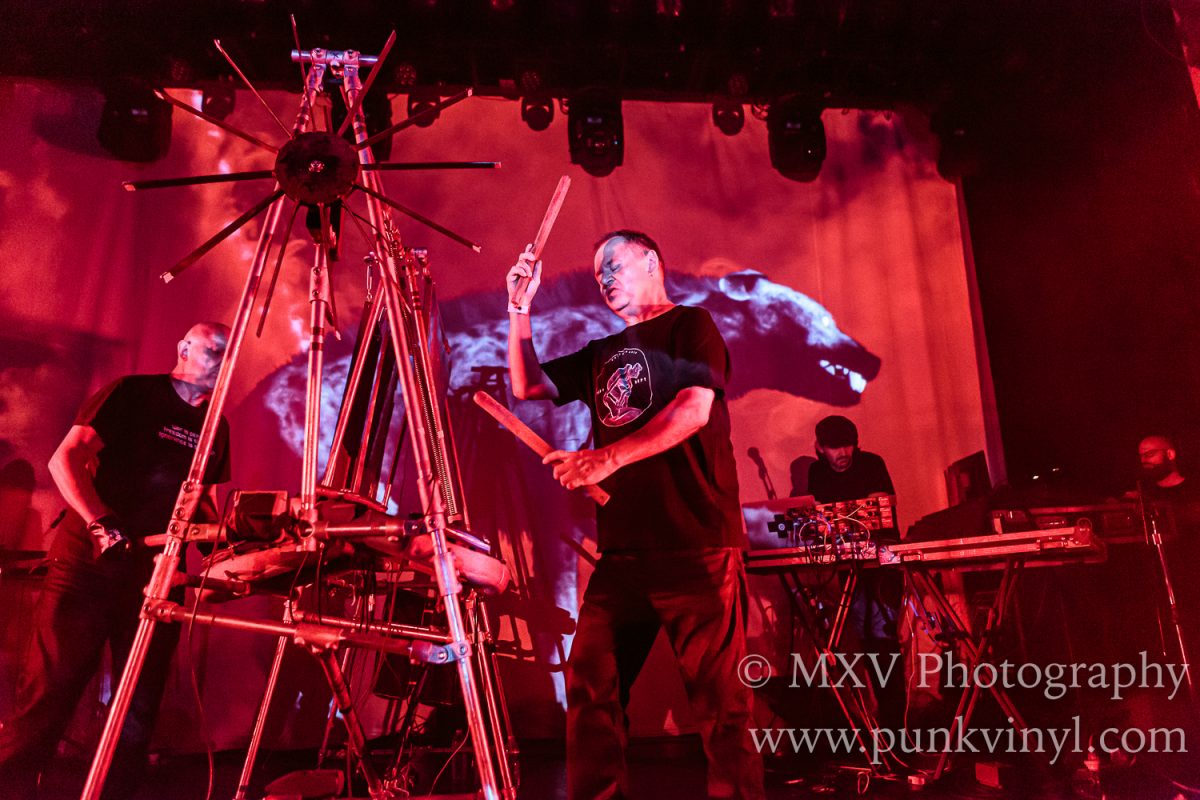 Saturday night was the third night for the annual Cold Waves festival at the Metro and they had a heavy hitter lined up for the headliner in Test Dept. They were joined by another great selection of opening acts and the club was quite full this evening.

Kaelan Mikla came all the way from Iceland! They had been on tour and were wrapping that up with this appearance at Cold Waves. These all female band started off with some moody atmospheric music while the singer performed a ritual with a goblet and baby powder as she walked around the stage. When the band got going they played some really great synth driven goth/post-punk that was reminiscent a bit of Miranda Sex Garden. The singer had a great voice and was seductively slinking around the stage and they had images projecting onto the backdrop behind them that illuminated the entire stage. They were really unique and their performance was nothing short of breathtaking. Everyone needs to check out this band immediately!

Adult was next and the place was packed. This two piece has been around for a long time now and they put on an amazing set full of their catchy electronic dark wave music. Their songs were high on energy and pretty fast paced. The singer had a microphone in each hand that she’d sing into both simultaneously, then hold them out and twirl around when she wasn’t singing. She moved around the stage constantly and the crowd was constantly dancing. They spent very little time between songs and just kept firing them off one after the other and their set went by in the blink of an eye.

Severed Heads have played a few Cold Waves shows in recent times but this would be the last as they announced that this would be the last Severed Heads show ever. They pulled out all the stops for this one and played some favorites and kept the set to the harder edged and more upbeat songs. It was easily the best set they’ve done at a Cold Waves, and possibly since reuniting. While the two band members manipulated their equipment they still found time to play with some stuffed animals and have a little fun up there. While they played they had video images displaying behind them. It was a great set and they really went out on a high note and will definitely be missed.

Test Dept. was next and this was their first Cold Waves. They had a huge setup of metal objects and drum pads along with a live drummer and keyboard player. They also had videos displaying behind them as they pummeled the audience with some intense metallic percussion. They were heavy, they were dark, they had a message, and they put on an amazing audio/visual spectacle not seen since Einsturzende Neubauten was in their prime. You could feel the percussion in every song in your bones and they were one of the absolute highlights of the entire weekend.

Cold Waves VIII was three for three so far in delivering amazing nights of music. There was only one left, but it too looked quite promising.