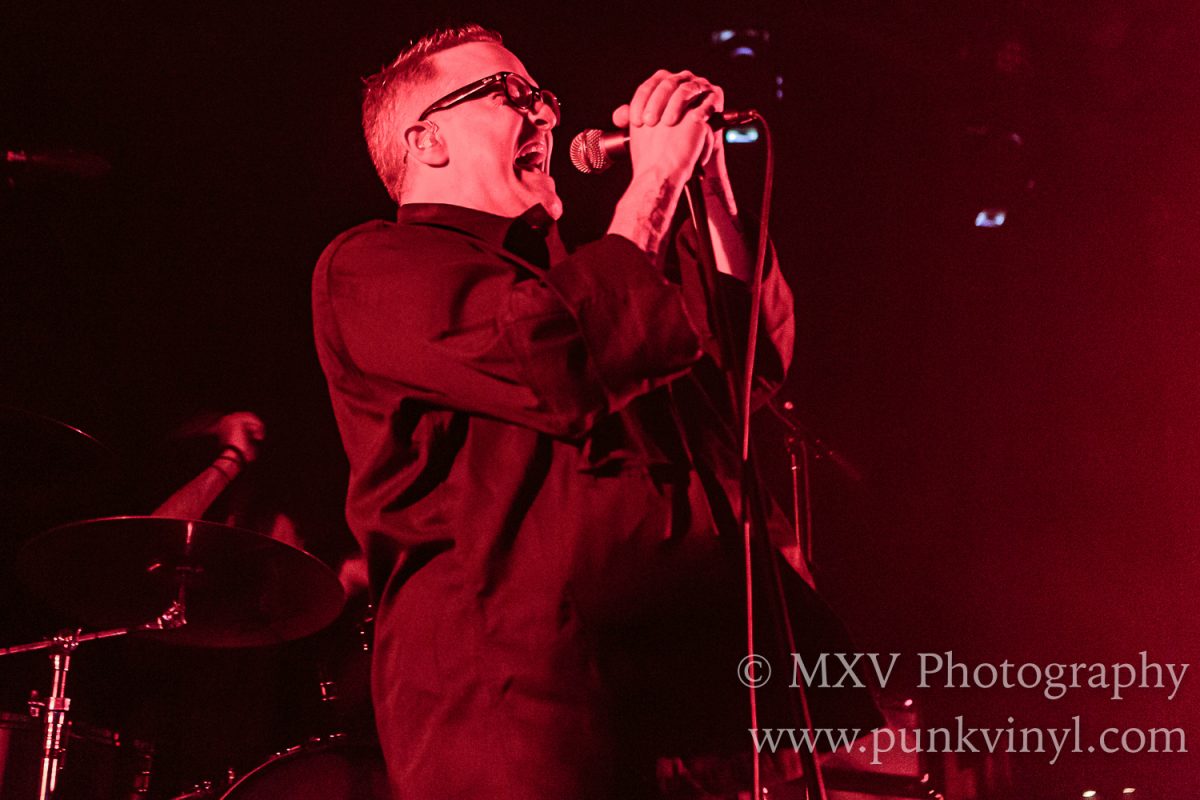 Sunday night was the last hurrah for this year’s Cold Waves festival at Metro. This show was headlined by the recently reunited, Filter. It also had some newer acts and a set by an industrial legend.

Street Sects set the world record for how many gallons of fog machine liquid could be consumed in less than an hour as the filled the entire club, including the downstairs below the club with fog. The machine was running every 30 seconds for 15 full minutes before they took the stage and ran every 30 seconds during their entire set. They also played in total blackness, the only lights being blinding white strobe lights pointed at the audience the blinded everyone. Not once could you see anyone on stage aside from the rare shape. Musically they blasted the audience with layered electronic pounding and intense growled and  shrieking vocals mixed with great melodic vocals. It was pretty awesome but have you ever tried to take a photo of a band playing inside a thick cloud while lights brighter than the sun are doing their best to induce seizures in everyone in the room? Street Sects will go down in history as being the only band photographed for this site that resulted in zero photographs of the band. You should definitely check them out if you like aggressive and sometimes noisy industrial music with catchy hooks, just make sure you bring a gas mask and some sunglasses. They were a great mix of industrial and punk, had really great songs, and were totally fascinating! The best band to hit industrial music in decades.

Paul Barker MDSS was next and it was simply the legendary Paul Barker of Ministry and Lead Into Gold fame doing a solo set of Ministry tunes. Paul didn’t play them in the traditional sense, instead he seemed to do live remixes of some popular Ministry trax. It was like a DJ set where the DJ is mixing his own band’s music. It was really interested the way he reworked these songs into these layered extended mixes and the crowd went nuts for it. When he did “Thieves” the entire main floor audience was jumping all over the place. Paul did five Ministry songs, starting with “Stigmata” and ending with “N.W.O.”. Those two and “Thieves” were the real highlights but aside from one song from Dark Side of the Spoon, every song he played was a fan favorite. It was a lot of fun and everyone loves Paul, so it was a treat to have him participate this year and do something unique that he hadn’t done before.

<Pig> was up next and they picked up En Esch from KMFDM as a guitarist recently which made it even more exciting. They played in a sea of dark red lights and delivered nearly an hour of industrial rock. They covered a good portion of their recorded output including newer material and they were a lot of fun. Raymond Watts is a really strong front man and he captured the undivided attention of the audience the entire time. They closed the nine song set with “Prime Evil”.

Filter recently reunited (or rebooted as Richard Patrick has assembled a new lineup of his long-defunct band). They seemed an odd choice for Cold Waves simply because Filter was really more of an alternative rock band than an industrial band, but they did have some industrial flavor to their music and Richard Patrick was a former member of Nine Inch Nails. Richard seemed pretty excited to be playing Filter music again and he and the band did an hour long set of their past material. They were surprisingly light on material from the first album, Short Bus, and did more song off of the subsequent records instead.

Patrick talked a lot between songs about music and about sobriety and also mentioned how happy and a bit surprised he was at the warm reception and good turnout. They put on a pretty solid performance with surprisingly little signs of rust. Playing music must be like riding a bike as many bands who have reunited after decades away seem to pick it right back up and play at the same level they were at in the past while making it look pretty easy. The sound was a bit muddy, but that didn’t stop people from having a good time.

Filter ended their set, and Cold Waves VIII ended with their best song, “Hey Man Nice Shot”. It came as no surprise the band saved the best for last and it was a great way to end the night and the weekend in general. Cold Waves VIII was a really good festival that was well worth going out for four nights in a row. Hopefully next year will be as good or better than this year was.