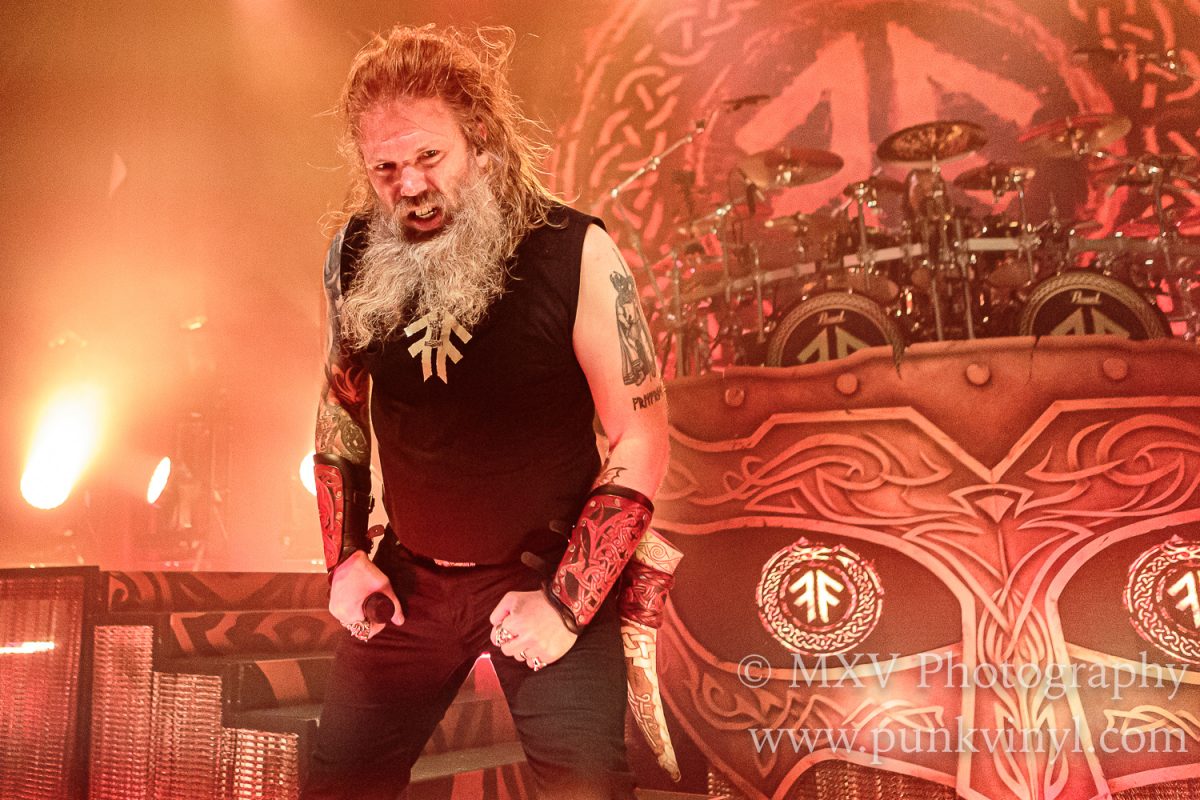 It was a Monday night of metal in Uptown where Amon Amarth headlined a show at The Riviera. It was a stellar four band bill with three real heavy hitters that have been crowd favorites for many years. People were so excited for this show that there was a line around the block of people waiting for the doors to open.

Hailing from Stockholm, Sweden (where a lot of great metal bands come from), Grand Magus took the stage first. It was their first time playing here. This three-piece band was more mid-tempo than you’d expect and had elements of doom, classic rock, and even some blues incorporated into their sound. Their songs were heavy and kind of catchy and they really put on a solid show. The crowd warmed up to them really fast and near the end they were even chanting along with the band during one of their songs. They delivered a fun half-hour of quality metal.

Long time death metal favorites, At the Gates, was next. They are also from Sweden and have been around since 1990 (minus about ten years in there where they had broken up). The crowd was pumped up and ready for these guys and they came out and immediately went full speed. Their ultra-fast and ultra heavy songs grew a big mosh pit in the crowd and many also started crowd surfing. The band opened with “To Drink From the Night” which they quickly followed with “Slaughter of the Soul”. The crowd ate up each song like candy and the band melted faces with fast, heavy riffs while the singer stalked around the stage and growled his head off. They were great and show no signs of slowing down.

Next up was another crowd favorite, Arch Enemy! Would you believe they are also from Sweden?! There must be something in the water there that breeds great heavy metal. The band took the stage to a big round of applause and started their set with “The World Is Yours”. Lead singer, Alissa White-Gluz is an amazingly strong front woman. She was constantly moving around the stage and delivering some amazing vocals that was at times brooding, guttural, shrieking, and booming. The musicians put on a clinic of technically proficient melodic death metal. Great tempo changes, intense and powerful riffs, and crushing percussion was the order of the night as the band blazed through an eight song set. The crowd went crazy once again and everyone was having a great time. At the point the club was absolutely packed. Arch Enemy’s 45+ minute set seemed to be over as quickly as it started and the crowd would have loved even more.

While they didn’t get any more Arch Enemy, they got even more excited and somehow squeezed even more people on the main floor when Amon Amarth took the stage. Amazingly these guys were also from Sweden! It as if the country gathered up their current best bands and sent them over to conquer America! Spoiler alert, they succeeded!

Amon Amarth had a pretty cool stage set with a giant viking helmet whose eyes were video screens that displayed different imagery for each song. The helmet was also a supersized drum riser and the drummer was positioned on top of it. Two stairways flanked the helmet which the band used to take to higher ground, and various costumed characters would appear from the perches. The whole set made for some really amazing visuals throughout their set.

The masters of Viking metal took the stage and lead singer, Johan Hegg had a Viking horn attached to his belt. The band ripped right into “Raven’s Flight” off their latest opus, Berserker. It sounded amazing and Hegg’s vocals were deep, raw, and powerful. The band delivered a flawless performance and people went nuts. The crowd was a sea of moving bodies as these Swedish vikings shook the earth that had to be felt in the entire north side of the city. “Runes to My Memory” was the next number and it just made the crowd that much crazier.

The band would pause briefly between songs to give Hegg a few moments to chat with the crowd. The band were in fine spirits and the audience was as well. Each subsequent song got better and better and the visuals kept changing. A giant skull warrior took the stage with a giant spear during “Deceiver of the Gods” and later on two warriors took the stage and had a sword fight to the death during “Way of the Vikings”. The band stopped to toast the crowd and all drank from horns before playing “Horns” and Hegg’s horn was nearly as big as he was and he chugged the whole thing down while the crowd chanted “chug, chug”.

After an hour or so of some of the best heavy metal happening, it was time for Amon Amarth to leave the stage and hit the road to dominate more of the country. They left about two thousand people sweaty and extremely happy and it was one hell of a great night of heavy metal!