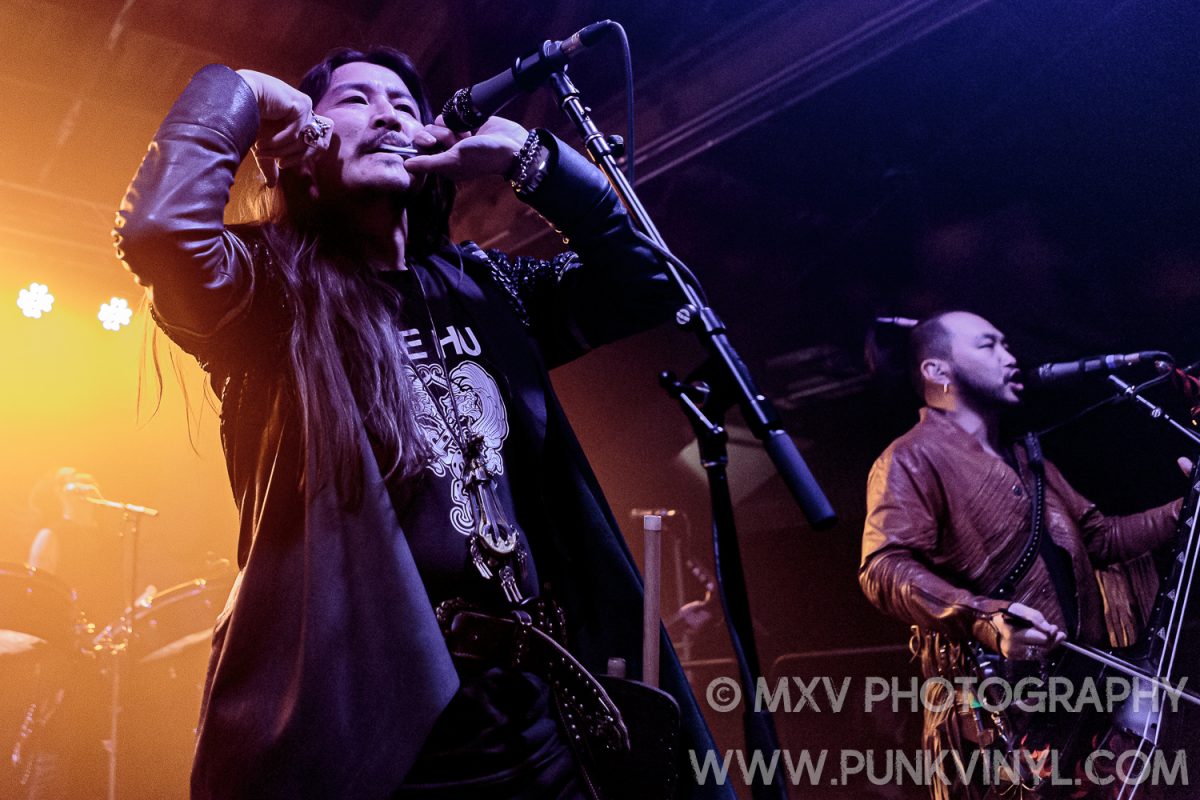 Hallowolfbat at House of Vans featuring The Hu, Doomriders, and Lighting Born 10/31/19

It was a rare, snowy Halloween on Thursday night here in Chicago but those willing to brave winter weather conditions to make the trek over to the House of Vans were treated to a really great event, all for the low price of free! Billed as Hallowolfbat, the event featured a three band bill as well as some really great day of the dead inspired decor that really brought the whole thing together. The venue even provided free blacklight event posters and a sticker and pin set which made for great mementos of a once in a lifetime event.

First up was Lightning Born, hailing from North Carolina. Astute music nerds may have noticed that this band features Mike Dean from Corrosion of Conformity on bass. This band was heavy on the riffs and 70’s style doom rock and their female vocalist was an amazing powerhouse as well. Her range and the amount of “oomph” in her voice was impressive and complimented the music nicely. Their songs were catchy yet powerful and they played a rock solid half hour set. If Sabbath style doom/stoner rock is your cup of tea (and it should be, for it is awesome) then Lightning Born is a band you’ll definitely want to check out. Two thumbs up!

Doomriders were next and then turned up the speed and increased the heaviness as well. Great, crushing riffs, faster tempo songs and a hell of a lot of energy came from these guys along with growling, heavy vocals. They were super tight, super thick, and melted every face in the audience. This singer/guitar player of this band also plays in both Cave In and Converge, so you know what you are in for with this band, and it is amazing! Their 45 minute set went by in the blink of an eye. These guys should be headlining shows all around the world and it’s a safe bet that in the near future they’ll be doing just that, they are that damn good.

Mongolian rock band, The Hu, was the final act of the evening. This band featured eight members! They were all dressed up like Mongolian warriors and the band featured two drummers, one more traditional and the other standing up playing huge kettle style drums. The remaining six members played a variety of instruments, including some Mongolian instruments such as Morin Khuur as well as other unusual instruments such as the jaw harp (sometimes two members would be playing these at the same time). The mostly mid-tempo pace was set by the two drummers which produced a very tribal sound. The rest of the musicians added layers of interesting sounds to the songs that were capped off with throaty, chanting style vocals. At times it sounded like a war dance and at times it was peaceful, but at all times it was fascinating as their layered and unique Mongolian flavored songs sucked you in and made you feel like you were in an unusual land on an epic adventure.

While The Hu was playing, a troupe of artists were moving life sized characters through the crowd and manipulating them to dance to the music. There were three unique pairs of creatures, one of which was a pair of skeletons. One can only imagine how long and how many people it took to create these huge and wonderful looking items and it added such an amazing visual to go with The Hu’s stunning music.

The Hu played for an hour and they said very little aside from occasionally announcing the name of the next song. In between songs, the crowd often chanted “Hu, Hu Hu!” which the band encouraged, and sometimes initiated. People were dancing (actually dancing, not forming a mosh pit), people were smiling, and everyone was having a great time. The Hu are one of the most unique and interesting bands around these days and a Halloween show with all the great decorations made for the ultimate climate in which to see them perform. It was an amazing way to celebrate Halloween in Chicago and the House of Vans is easily the most fun venue in which to experience live music since the events are always done in a way to make each one special.