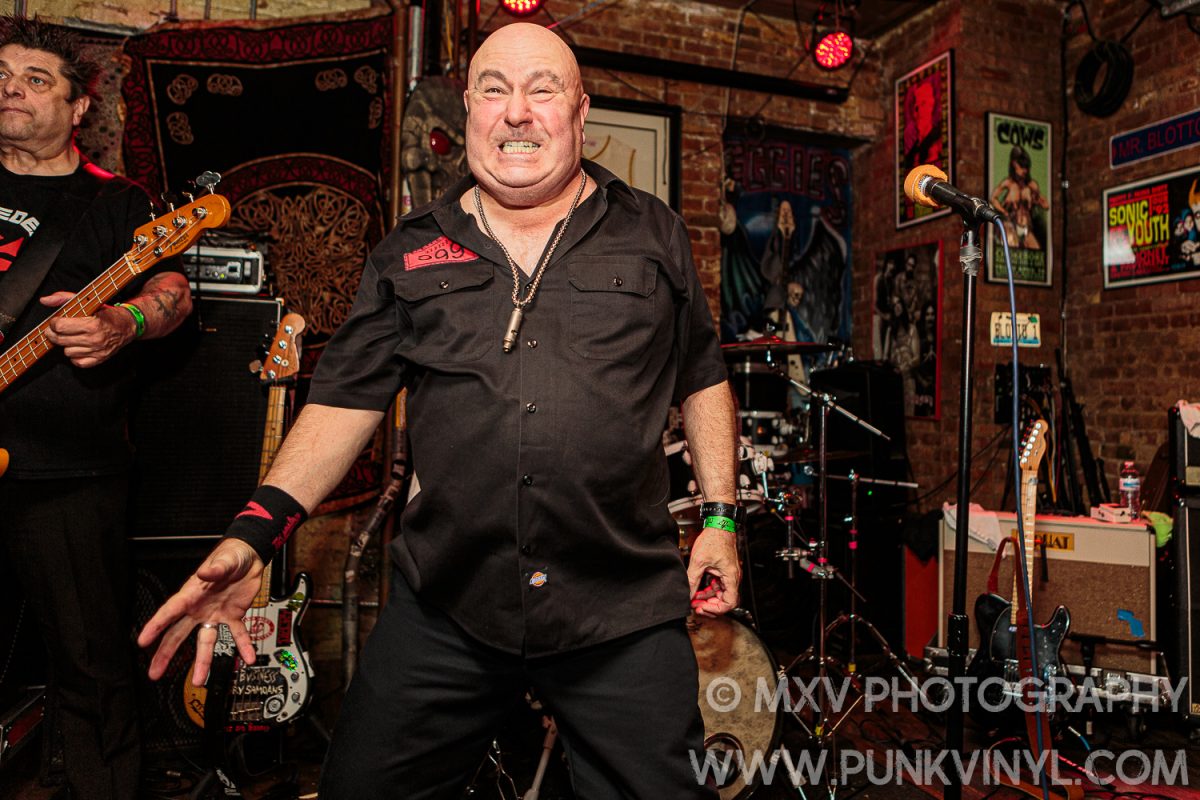 Saturday night over in the Music Joint side of Reggies it was a very special evening if you are an old punk rock fan as first wave British punk band, 999, headlined a show there. Forty years is a really long time to wait for a mostly active band to return to Chicago but that is roughly how long it had been since 999 last played this city!

First up was Big Blood. This was a three piece, lo-fi garage rock type of band. The singer/guitar player had two microphones set up in front of him: a standard one and one made out of an old telephone receiver that did the distorted style vocals. Their songs were decent but they seemed a little green, it could be they aren’t used to playing many shows or perhaps they are just a very inexperienced band but there was a bit of sloppiness to them. They played for a half hour.

Next up was a somewhat obscure but excellent old punk band, The Clap. Dating back to 1978, The Clap are an East Coast punk band that put out an excellent 7″ in 1980 and has put out occasional releases over the years, including a new one that came out recently. These guys were a ton of fun and played their early material along with some newer tracks. Their sound takes influences from both the early British and New York punk bands and their old school punk style sounds as good today as it did back in 1980 when they released their first single. The crowd loved them too and while most of the audience probably wasn’t familiar with them before Saturday night, plenty of them walked away a fan. Their 45 minute set was excellent!

Punk legends, 999 took the stage next. The lineup featured original members Nick Cash and Guy Days, along with their bass player of the past 30 years, Arturro Bassick. Original drummer, Pablo LaBritain was unable to do this tour so they had someone fill in for him for these shows. The band picked up their instruments and got straight to work by opening with a sing along favorite, “Boys In the Gang” and sing along the audience did. Cash often held the microphone out to the crowd to help sing the choruses and the people loved it! The band delivered one classic 999 song after the next and they sounded as great as ever.

The set was a veritable greatest hits collection and really showcased how many truly great and catchy songs the band created over the years. Highlights included “Inside Out”, “Feeling Alright With the Crew”, “Titanic Reaction”, “Lil Red Riding Hood”, “Emergency” and of course, “Homicide”. People danced, sang, and drank, and the band just kept belting out the hits. After playing nearly an hour, they left the stage for about two minutes before coming back for a three song encore which included “I’m Alive’ and “Boiler”. It was an amazing set, proving that more than four decades in, the band is still an incredible live act that still has a lot to offer (they even have a new album coming out in early 2020). Four decades was a long time to wait for them to come back, but it was totally worth it!