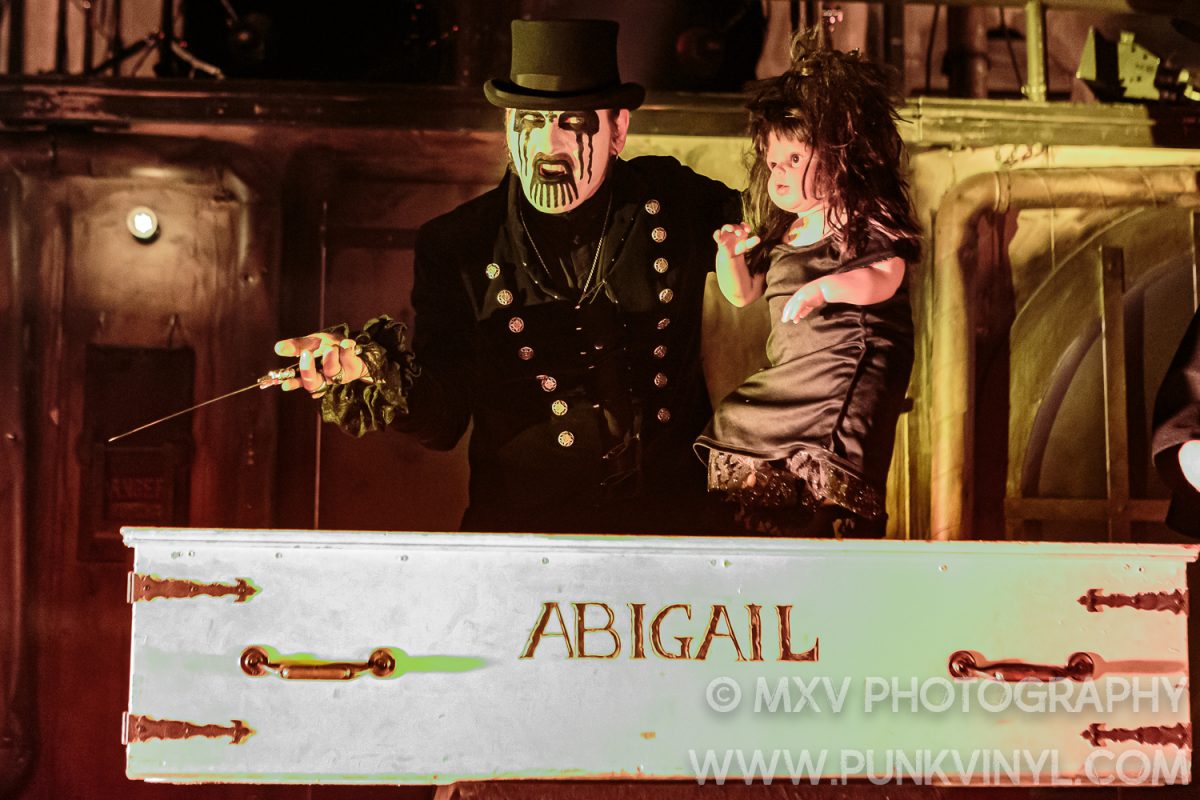 Monday night, the legendary King Diamond headlined a show at Riviera Theatre. He was part of a three band bill and the venue was packed to the rafters with heavy metal fanatics eager to see their beloved King.

First up was Idle Hands. Hailing from Portland, OR, these guys played some mid to fast temp gothic rock. Their singer had a good, low, bellowing voice and their tunes were pretty catchy. They played around a half hour and it was a very enjoyable set.

Next up was Uncle Acid and the Deadbeats. This four piece played in very low light and had trippy, psychedelic films playing behind them. They played fuzzed out space/stoner rock with deep grooves and great riffs. Their repetitive, slow building song structures were hypnotic and their fuzzy and crunchy riffs were beyond satisfying. It was a 45 minute trip.

After the stage was cleared of the previous band’s gear, it was time for the mighty King Diamond to take the stage. The crowd let out a huge, exciting roar when the lights dimmed. The stage decor had three levels connected by staircases and the stage level had a door in the center of the ornate wall. The door opened and there was King Diamond laying unconscious on a hospital gurnee with an IV attached to it. He was wheeled out onto the stage and a few moments later woke up and scoped out his surroundings. It was then that the band started their first selection of the evening, “The Candle” from the first King Diamond album, Fatal Portrait! The music started and King grabbed his trusty bone cross microphone which was hanging on the wall and began singing. It was immediately apparent that King hasn’t lost a single step in the past four decades of making music and his voice and range was as awe inspiring as ever. How the guy can growl one moment and transition so such an iconic high pitch and make it sound so good is one of the great unknowns, but he was on fire as usual.

Next up was a pair of songs from Abigail, “Arrival” and “A Mansion In Darkness”. It was before the latter that a small casket with the name, Abigail, inscribed on it was wheeled out and King pulled out a doll and sacrificed it after a bone chilling speech in a demonic voice. The crowd was going crazy head banging during the whole song. From here the theatrics continued and saw appearances by Grandma (for the classic, “Welcome Home”) , a nun, some druids, and more as the band delivered a nice sampling of the past 35 years of King Diamond music, including their latest song, “Masquerade of Madness” which had an appearance by what looked like a female patience of a psyche ward from hell. It is a killer tune too that is right on par with King Diamond’s best work.

After about 75 minutes, the band closed their main set with “The Lake” and they left the stage for just a few moments before returning for a two song encore that completed with regular show closer, “Black Horsemen” which features a chilling acoustic intro. The band took a bow as the King gave a heartfelt thanks to the city of Chicago which has been good to him for his entire career. It was as strong of a King Diamond performance as you could have wanted and with a new studio album in the works it would appear that our King still has a lot left in the tank which should ensure that this won’t be the last time we’ll get to see his amazing live show.