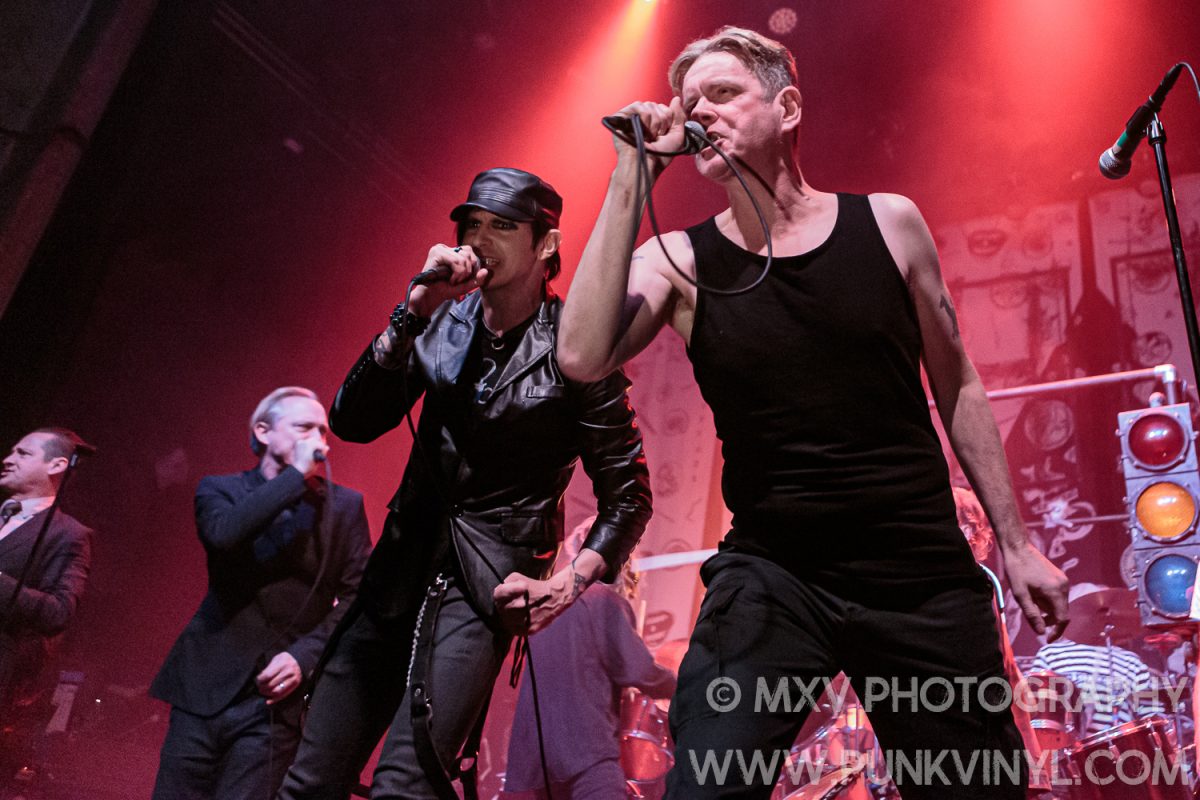 Pigface reunited once again and hit the road to tour for the first time in 14 years! The band was dormant for more than a decade before reactivating for a one-off performance here in Chicago two years ago and it was such a good time that it was destined that they’d be back. The club was quite full with an audience that varied as much in fans of various musical styles as well as a wide age range.

I Ya Toyah was up first. This one woman, multi-instrumentalist played a blend of dark wave, electronica, and industrial and had great vocals to compliment it all. She had a lot of flashing lights and video images being displayed behind here which made for an interesting visual to go with her equally interesting music.

Gaelynn Lea was up next. Pigface fans who attended their reunion show two years ago should be familiar with her. She’s another one woman show where she sings and plays violin that is hooked up to various effects that she controls from her chair. Gaelynn played a short, four song set that consisted of her beautiful take on Pigface’s, “Point Blank”, two of her original compositions, and a traditional Celtic tune to close her set. She got a wonderfully warm response from the audience who were all treated to her returning later to join Pigface near the end of their set.

The time came everyone was waiting for and that was for the mighty Pigface to take the stage. The lights dimmed and there were big white screens set up across the entire width of the stage. The familiar percussion to “Insemination” began and as it was happening, flash and spotlights were emitting behind the screens to create shadow of various members. As the lights moved, so did the shadows and then it would go dark at the breaks. It was a really amazing looking visual that was also used by Skinny Puppy on a couple of their tours. The drums sounded amazing during this song and we’d soon find out why as when the song ended and the screens were taken down to reveal the stage, there were three drummers! Martin was flanked by Danny Carey of Tool and another drummer and later on they’d add two more!

This show had to be the single largest assembling of members for a Pigface show and featured not only many familiar faces returning to the family but some new recruits as well. It appeared that as the two week tour progressed that Pigface just kept collecting additional musicians and brought them home for the biggest Pigace blowout bash of all time. They had three bass players, between three and five drummers at any given time, two to three guitarists, at least six vocalists, two saxophone players, someone on samplers/keys, cello, violin, and more! It is damn near impossible to list everyone but various highlights included the return of Chris Connelly to Pigface for the first time in probably close to 20 years!, En Esch, Randy Blyth of Lamb of God who fit in perfectly as a new member of the band and had non-stop energy, Andrew Weiss, Mary Byker, Curse Mackey, Ruby, Dirk Flannegan, the forever cool Charles Levi, Bruce Lamont, and more. It was amazing that all of them even fit on that stage as it was completely packed.

Most members stayed on stage the entire time and would switch up roles and instruments based on which of the two dozen songs on the setlist was being performed. En Esch played guitar a lot but would ditch it when it was his turn to handle lead vocals on songs like “War Ich Nicht”, Ruby would come out to deliver her amazing vocals on a few songs and then vanish for awhile, only to come back for some more singing. Chris Connelly came out for just the songs he was singing on including “Murder Inc.” and a beautiful duet of “Ten Ground and Down ” with Ruby that warranted the price of admission alone! Curse Mackey and Mary Byker did a lot of heavy lifting, singing on a large handful of songs and never leaving the stage, as did Randy Blythe who would pick up anything to use as a drum that he could find when he wasn’t proving lead or backing vocals. Randy did a cool, metal style vocal delivery on “Tapeworm” which worked really well.

The familiar drum machine percussion of “Hips Tits Lips Power” started and looped while Martin Atkins left the drum kit briefly to introduce a group of local hip-hop emcees (C.A.M. J. Lamar, Dai, and Just Chris) from Haven Studios in the south side of Chicago. All the members of Pigface took a few steps back and gave them center stage as one by one they killed it rapping and freestyling over the beats. Each one was better than the last and it really showcased the diversity of what the Pigface collective has been about since the beginning. When the emcees were done, the members of Pigface moved up to join them and they together went into “Hips Tits…” as a giant unit and it was so much fun!

Mary Byker gave his vocal performance of a lifetime with a spine tingling version of “Satellite” which is one of the many gems of the Pigface catalog, and his “Auto Hag” damn near equalled it as many of the other vocalists were waving around checkered flags. The band did a really amazing acoustic version of “Suck” which saw Gaelynn return to the stage, where she remained to participate in the final numbers of the set which included a KMFDM song, “Godlike” which made the audience go nuts, “Fuck It Up” and an extended version of “Suck” which featured every single member of the band, plus lots of friends, crew, and guests filling every square inch of the stage, turning it into a giant party. It was a hell of a way to cap off a two and a half hour set!

It was a huge holiday treat to have Pigface return once more. Hopefully they decide to do it again sometime because Pigface in 2019 is still every bit as fun and relevant as they were when they were regularly recording and touring.