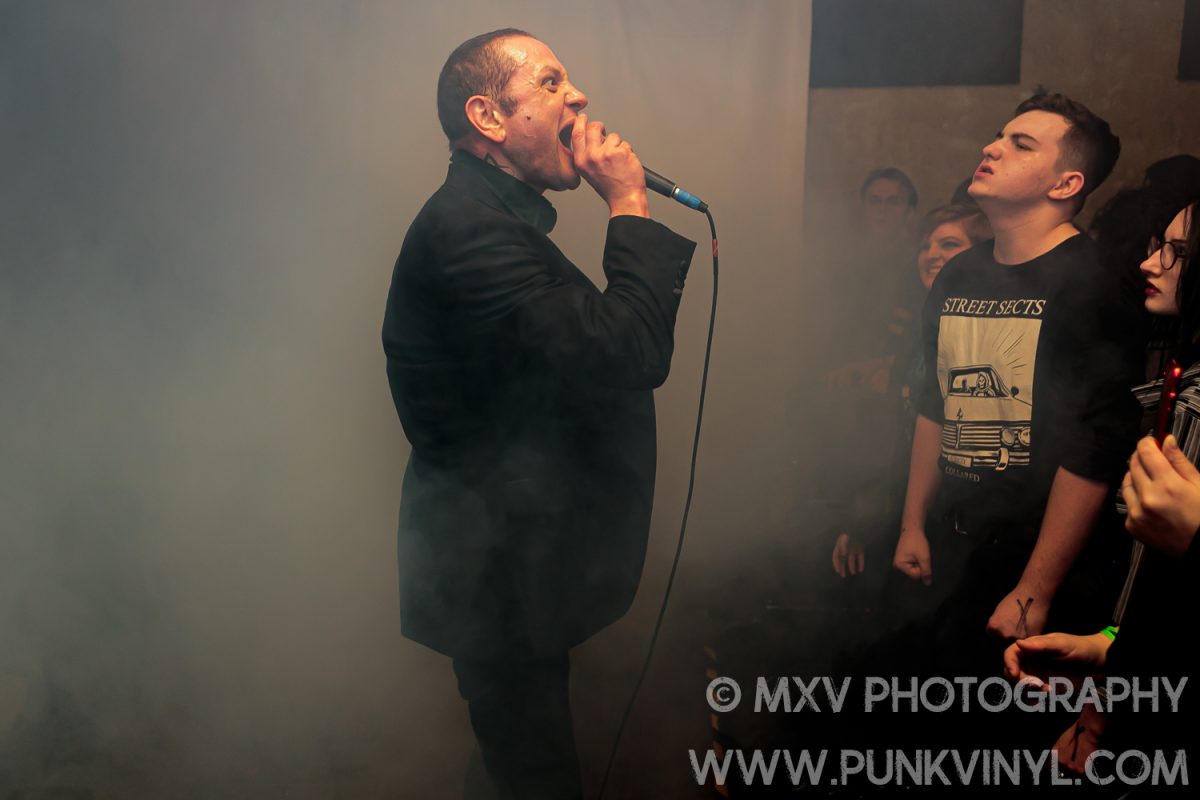 Last night in the downstairs room of Subterranean, Street Sects headlined a three band bill. The band has been touring quite a bit recently and after returning from Europe, they hit the road one more time to get some more dates in before the year ends and a good portion of the country gets snowed in. The downstairs room at SubT is rather small and the stage is only a few inches off the ground so much of the crowd packed themselves in at the front of this stage in order to get the best view and be right up in the action as the bands performed.

First up was Ozzuario. This is a two-piece band that featured one guitar player and a vocalist who also had a bunch of electronics. They mixed electronic rock with grindcore vocals. Their songs built on repetition and pounding while the guitarist was wailing away as the singer was growling and gurgling. They were OK for a song or two but the sameness of their material wore a little thin. They played about a half hour.

Fire-Toolz, the one-woman outfit of Angel Mercloid, was next. She played a variety of electronics and guitar while manipulating effects throughout the songs. The music was often ambient and experimental and there was interesting visuals being projected on the adjacent wall that was tailored to each song, even to the point of displaying the lyrics to some of the songs as Angel was delivering heavily processed vocals that sounded like that of a black metal band. The whole thing worked really well and was very interesting, mixing hypnotic dance grooves with occasional sprinkles of aggressive vocals and guitar that always kept you guessing what was next.

As the two members of Street Sects took the stage to finish setting up, they filled the entire club with a sea of fog from their fog machine so thick that you couldn’t even see the person next to or in front of you. The room was pitch black and the sound guy was using a flashlight to try to finish his work. The band took their places on stage in the cover of the fog and the familiar churning of the opening notes of “If This Is What Passes For Living” started. The sound, much of it provided by the band’s own sound equipment, shook the building to its core and occasional bursts of blinding strobe lights emitted from the stage, programmed to go along with the music. Looking at the stage you’d either see total blackness and fog or blasts of light as bright as the sun and occasional glimpses of vocalist Leo Ashline stalking around the stage. Leo would appear to teleport in and out of view, one moment you can’t spot him anywhere, then in the blink of an eye he’d be inches from your face during the intense screaming portions of certain songs.

Buried in the fog completely invisible to the audience, multi-instrumentalist Shaun Ringsmuth was creating an aural assault like a grand wizard as the band played one great song after another, including their latest single, “If Life is a Gift, It’s in Very Poor Taste”, during their abbreviated set. It was sadly abbreviated because the band’s fog machine filled up the club so full, including it wafting to the club upstairs, that it set off the fire alarms in the club about half way through their set. Suddenly in the middle of a song, the fire alarm was buzzing and flashing. At first it almost sounded like part of the show but the club soon turned the house lights back on and as soon as the band finished their song the sound man stumbled onto the stage and told the audience that the club is being evacuated. Everyone was forced to leave and the fire marshals showed up a few minutes later to inspect the place and ensure there wasn’t a real fire. Sadly that meant the end of the show and we were robbed out of the rest of Street Sects’ set, but what we got to witness was phenomenal and this band should be on everyone’s radar and playing larger venues, they are that damn good and quite an amazing spectacle, as long as you aren’t prone to seizures! If you get a chance to catch them on one of the few dates remaining on this tour, don’t let anything get in your way of seeing this incredible band!