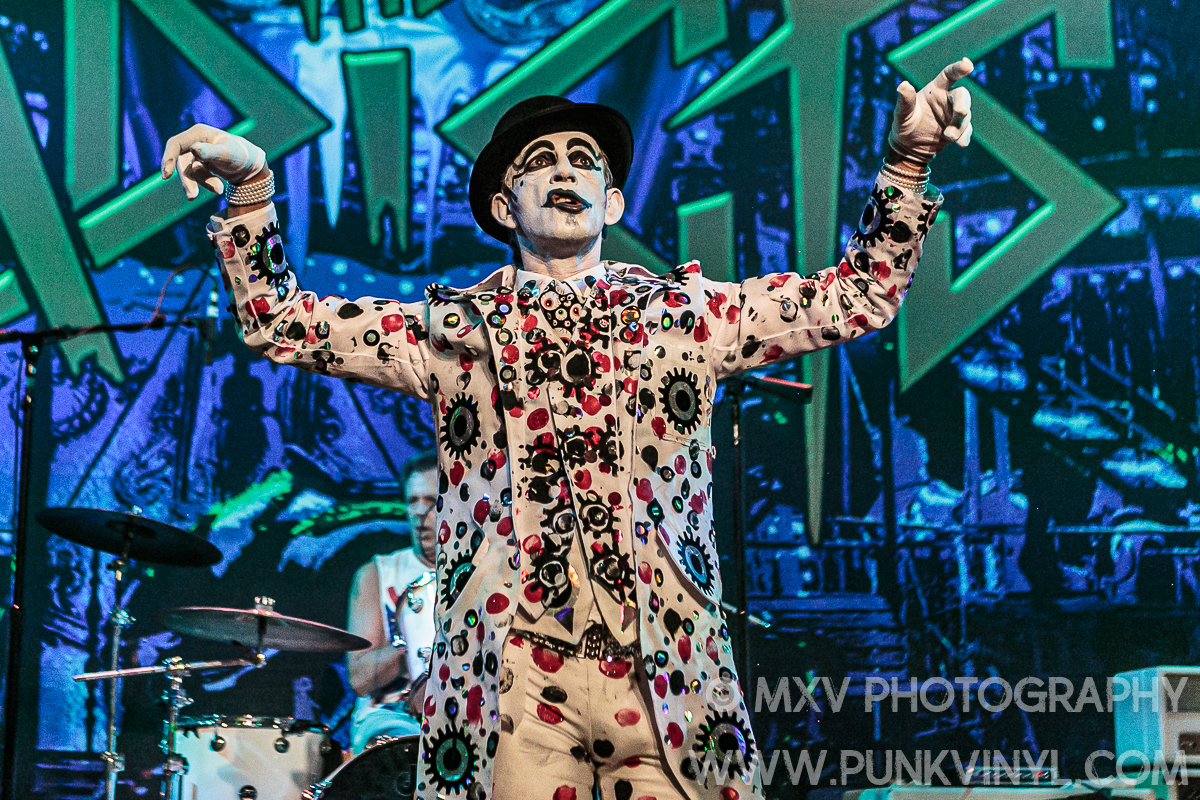 Wednesday night, UK punk legends, The Adicts, made their long-awaited return to the windy city to headline a three band bill. The club was packed full of excited punk fans spanning a wide range of ages.

First up was Chicago locals, Poison Boys. They had a very Heartbreakers inspired classic punk sound and had the looks to match it. Loud guitars, good energy, and vocals with a little snarl to them. They played a very enjoyable, 30 minute set. Very solid punk rock and roll.

Next was another local act that has been on the rise as of late, Mystery Actions. This all-female four-piece put on a hell of a great set. They played fast-tempo punk rock with some great guitar work, fantastic drumming, and a lead singer with a strong, sort of gruff voice in the classic sense of female punk rock legends (think Wendy O Williams) but also showed off that she can deliver a more melodic delivery in random bits of her vocal delivery. She’d twist and writhe around the stage, often with her eyes rolled back in her head while the guitar player just shredded out great power chords. They had a great energy about them and the crowd loved every minute of them. Go out of your way to see this band play sometime, they are absolutely worth the time and effort. Go immediately!

The crowd was getting anxious by the time The Adicts took the stage. When the curtain was drawn, the entire band was out there in their familiar Clockwork Orange inspired garb. When the familiar chords of regular show opener, “Let’s Go” started, lead singer Monkey was standing front and center with his arms wrapped around himself with peacock wings affixed to them. He unwrapped his arms and spread them out and had a massive set of sparkly wings which he waved around as he was singing. The crowd wasted no time going crazy and singing along. People were bouncing all over the place and shouting and singing along to the chorus. The crowd was amped up big time and kept that energy up for the entire show.

Monkey shed his wings and picked up the cards for “Joker in the Pack”, another crowd favorite. He was slinging cards into the audience and they were climbing all over each other trying to get their hands on one of them. The band plowed through the song like a well oiled machine and decades of touring has only resulting in their live shows getting better and better with each passing year. The band had as much energy and enthusiasm as the audience and they were smiling the entire time. It was clear they were having as much fun up there as the audience was on the floor.

As the band belted out one great tune after another, including showcasing some of their newer material, Monkey wowed the audience with a variety of different props that included an illuminated umbrella, confetti and streamers, among other things. He has always been a great showman and this show was proof of that. As the band got to the last half of their set, they busted out a lot of old favorites back to back, which made the crowd go insane. Nearly the entire main floor was one giant pit of moving bodies. Some real highlights were “Chinese Takeaway”, “Who Spilt My Beer” (where Monkey filled his giant hat with beer during the song then dumped it on the audience at the end of the song) and of course, “Viva La Revolution”.

When The Adicts left the stage they had been playing around 90 minutes and the entire audience was sweaty and smiling. Few bands bring the fun to punk rock like The Adicts do, and the spectacle of their live show makes them one of the best live punk bands to see live, something that’s been their trademark for four decades!