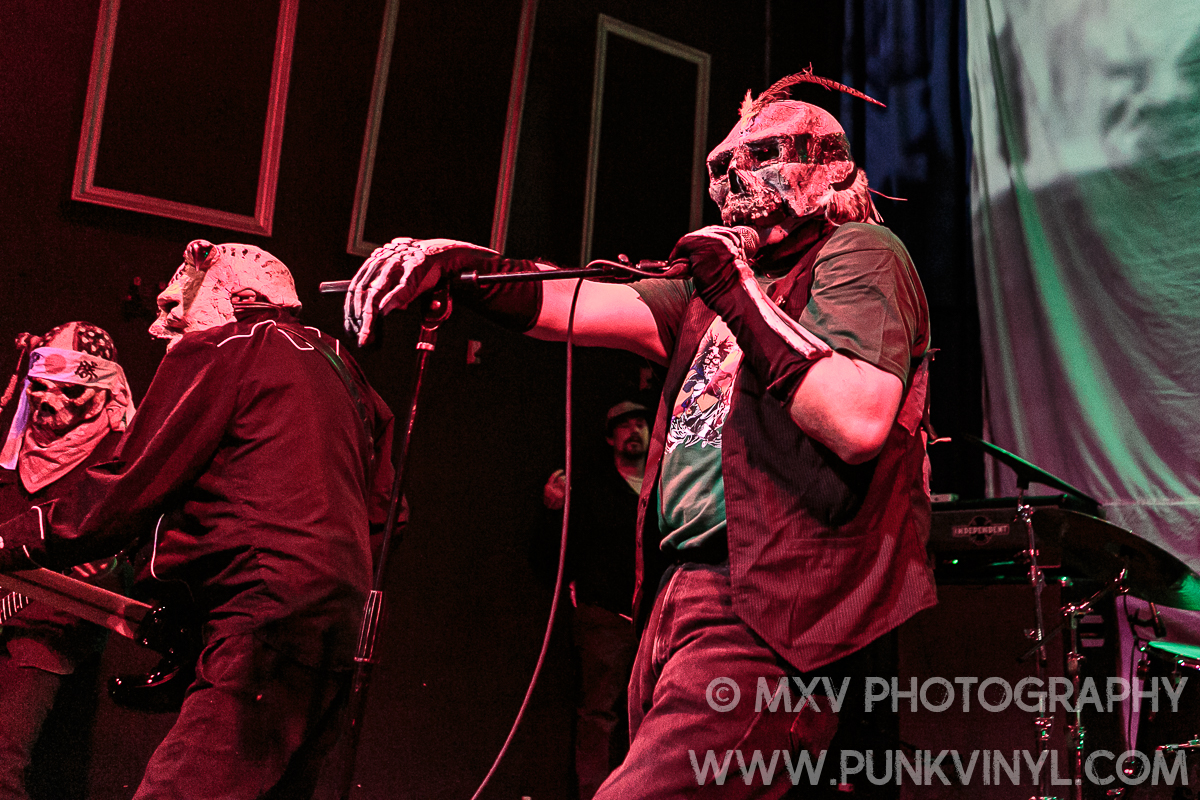 Friday night was a special night in Oakland, CA as The Uptown hosted MoFo’s 60th birthday party and it was a skate rock extravaganza! Drunk Injuns and JFA played together in honor of MoFo, and they were joined by two other excellent bands as well. There was also some raffles, some artwork on display, and the whole thing felt like a big skate rock reunion.

First up was Devils Sliders. This three piece was made up of young kids that didn’t even appear to be old enough to drive. Age was no barrier for their musical ability though as these kids shredded. They played some old-school thrash metal, heavy with an early Metallica influence. Fast and heavy riffs, good vocals, great energy, and lots of power. It was like taking a time machine back to early thrash metal days and this music was being performed by  kids that were born decades later. Excellent stuff!

Next up was Clay Wheels. This band features skate rock legend, Ray Stevens II on bass (Drunk Injuns, Los Olvidados, The Faction) and a member of Fang on guitar! They played many instrumentals that were heavy on the surf sound and quite enjoyable, and some songs with vocals that were faster punk numbers. They were excellent and with as many people in the audience carrying skateboards as there was, it’s amazing that they didn’t start skating in the club as Clay Wheels’ music definitely makes you want to go out and skate. It was a fun 30 minute set.

Skate punk legends, JFA, were up next. It is always a treat when JFA comes to down and it’s amazing that they’ve been at it for just shy of 40 years now! The band rarely tours but they do play up and down the west coast regularly and they deliver the goods every time. This was no exception as the band still plays with the energy and enthusiasm now as they did when they were teenagers. They played a rock solid set that was heavy on the old favorites, mainly from Valley of the Yakes and Blatant Localism, as well as a couple of new songs and a couple from the Mad Garden EP. It was a bit surprising that they played nothing off the Untitled album, but they have so many great songs that something has to be left out. The crowd went completely bonkers during their entire set, especially during the old favorites like “JFA”, “Out of School”, “Beach Blanket Bong Out” and others. Brian entertained the crowd with some banter between songs, and the keyboard songs like “Charlie Brown” and “Lightning Storm” sounded amazing, in fact for as good as the latter is, their live rendition of it is nothing short of incredible. Brian was constantly in motion and the band played fast and furious and the entire set was nothing short of amazing.

Drunk Injuns made a rare appearance to close out the evening. The band took the stage decked out in their costumes and immediately got to playing, “Y-Camp”, which went right into “Heal Me” which is when lead singer, Restless Spirit (aka: MoFo) took the stage. These otherworldly spirits were another example of a band that is nearly four decades old playing with the energy and “oomph” of a bunch of youngsters. They sounded incredible. The band played pretty much every song they ever wrote and each one sounded better than the last.

Speaking of sound, the sound in The Uptown was really, really good. Everything sounded clear and powerful. Restless Sprit’s vocal delivery was spot on as he bellowed his vocals during such Drunk Injuns greats as “Your Mama”, “Not Forever Yours”, “Mental Holocaust” and their greatest song ever, “Program”! They played for about an hour or so, totaling 16 songs. It was a flawless set and such a rare treat to get to see them play. It may have been MoFo’s birthday, but it was the audience that got the real present!