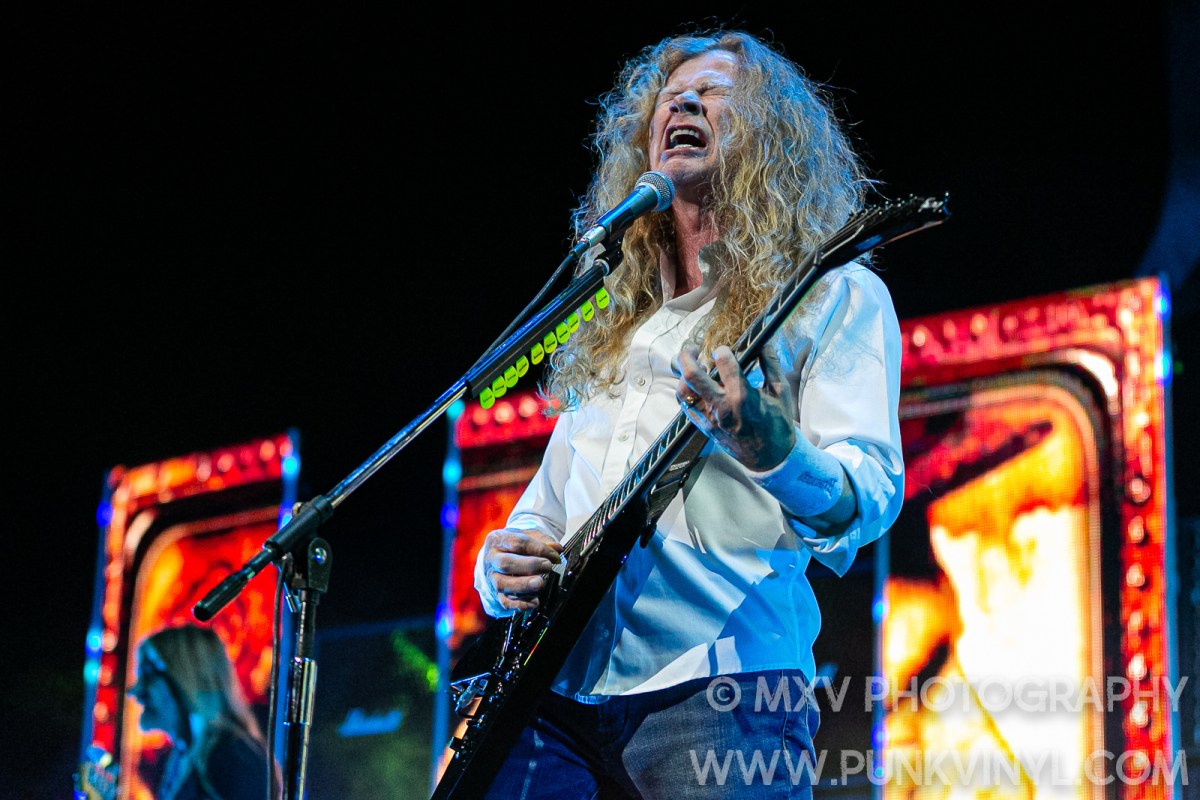 After rescheduling the self-proclaimed “metal tour of the year” thanks to the COVID-19 pandemic, thrash metal titans Megadeth, Lamb Of God, Trivium, and Hatebreed (replacing In Flames), packed thousands of metal fans into the Hollywood Casino Amphitheater on Thursday night to welcome live music back into their lives.

The well-paced show began with hardcore stalwarts Hatebreed bringing the mosh-heavy style of hardcore they helped popularize to the gigantic stage. The band’s 30-minute set was a rollercoaster of emotions for this attendee, who has watched the band rise from their beginnings in 1994 into the juggernaut they are today. Opening their set with the first song from their first album (the landmark Satisfaction Is The Death Of Desire), it wasn’t surprising whatsoever to see and hear that Hatebreed hasn’t lost a (two) step. That being said, after the band broke big with their excellent sophomore album, Perseverance, they’ve released six more albums of metallic hardcore, a genre where it’s notoriously difficult to age gracefully. Any audience members unfamiliar with their oeuvre or lacking ‘90s sentimentality would surely find their undynamic style the musical equivalent of monotone speech.

Songs like “Smash Your Enemies,” “Perseverance,” and “I Will Be Heard” are hardcore anthems, but then again so is every other Hatebreed song. Vocalist Jamey Jasta dedicated “Instinctive (Slaughterlust)” to the Marines, but the song’s aggressive, overly-macho lyrics (“Like a savage, barbaric”) made it seem more like the band wrote the song in order to cater to a specific demographic as opposed to from the heart. A cover of “Ghosts Of War” by the recently-defunct thrash titans Slayer felt like Hatebreed barely waited until Slayer’s body was cold before piggybacking on their legacy in order to endear themselves to the heavy-metal hordes. The massive venue size didn’t play to Hatebreed’s strengths, but the crowd seemed open to their brand of heaviness, and near the end of their set when Jasta told anyone still sitting down to “stand up and show them some respect,” it was hard to disagree with his sentiment.

Florida’s Trivium followed, a presentation decidedly more metal than Hatebreed’s rooted-in-hardcore style. The four members immediately showed themselves to be excellent players, their style a tidy amalgam of what sounded like all metal subgenres rolled into an easy-to-swallow pill. Progressive, thrash, and death metal elements were present, though sometimes clashing. For example: melodic singing on top of aggressive blast beats. Trivium is cut from the same cloth as French peers Gojira, but without the charisma, which resulted in what someone unfamiliar with Hatebreed might have felt that night: a feeling of sameness from song to song.

Lamb Of God — a band that many fans were present to see, if merchandise is to be believed — were slotted as direct support for Megadeth, and thankfully for Megadeth, they’re Megadeth, so Mustaine and Co. didn’t have to worry about being blown off the stage by the Richmond, Virginia heavy-hitters. Naysayers could accuse Lamb Of God of the sameness presented by Hatebreed and Trivium, but if Lamb Of God is a one-trick pony, it’s one unique and damn good trick. Their staccato-heavy riffing is made to snap necks, and over the course of their career, the band has at least tried to grow, adding more melodic elements along the way. But, it’s chest-thumpers like “Now You’ve Got Something To Die For” and “Laid To Rest” that speak directly to the fans in the pit, and that’s Lamb Of God’s bread and butter: moving the crowd. One area in which Lamb Of God does fall victim to sameness is their overuse of a beats-per-minute tempo of around 120 (think your average dance track), so when a ripper like “Set To Fail” is tossed into the mix, you’d wish they’d speed up or slow down more often. This is a nitpick. Live, the band is tight, aggressive, and focused, and it’s obvious that Lamb Of God is the rightful heir to the Pantera throne: a stadium-sized metal band that hasn’t compromised their sound one bit and still managed to acquire legions of die-hard fans.

Megadeth closed the evening with a metal clinic that only a veteran act like this can pull off. The rear center of the stage was a wall of Marshall amps with vertical LED displays between each column of amps. The impressively large drum kit was set atop this wall of amps. There were also very interesting light arrays forming borders to the LED displays that curved overhead and formed a sort of canopy over the stage. The band opened with “Hangar 18” and was immediately firing on all cylinders from the get-go. After two false starts due to some technical issues, they followed it up with “The Threat Is Real.”

One of Megadeth’s big strengths was the diversity in their songwriting and how they were never afraid to change speeds and mix things up. Another strength was the guitar work and interesting solos that adorn their many great songs. These were on full display as the band ripped through a solid set that touched on different eras of their lengthy career. Each song had unique visuals being displayed on the LED screens behind the musicians on stage. The band placed deeper cuts, including a rare performance of “Conquer Or Die”,  between some of their most popular staples such as “Sweating Bullets”, “Symphony of Destruction” and the set-closing anthem, “Peace Sells But Who’s Buying”. Every song was played to perfection and occasionally lead singer, Dave Mustaine, would speak to crowd which revealed that his speaking voice was worse for wear on this tour, but it didn’t diminish the quality of his trademark snarling gravely vocals at all.

The band came back for an encore of just one song (thanks to the curfew) but if you are only getting one song in your encore then “Holy Wars” is one of the best songs you could ask to end the night with. All-in the band played close to 70 minutes and the crowd loved every minute of it, especially having been starved of concerts for close to two years.