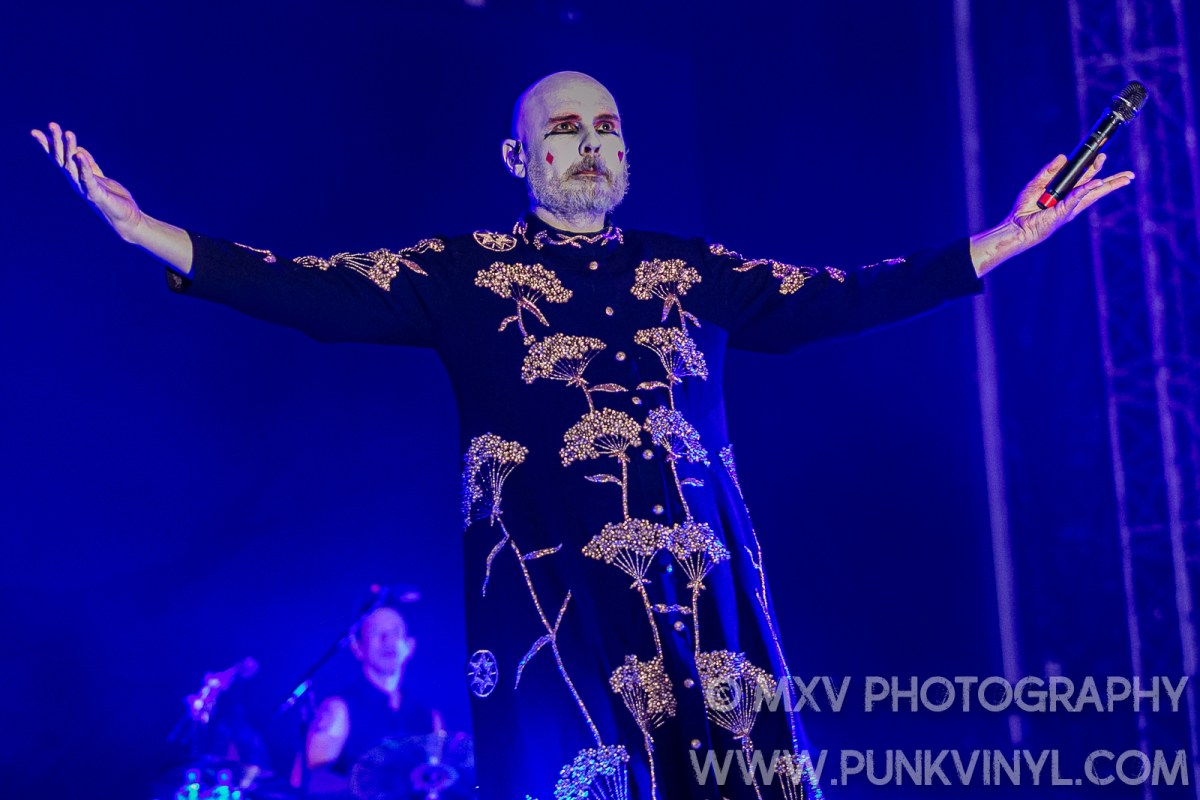 Friday was the second day of the 16th Riot Fest, but the first full day of this year’s festival. The gates opened bright and early and there was plenty of things to do and bands to see right after they opened. The weather was ideal for most of the day, but took a turn later in the evening.

Oxymorrons hit the Rise stage just after lunch time and kick started the day into high gear. Led by two brothers, this fusion of rap and hard rock checked all the boxes for fans of either genre, and their blend of the two styles was nothing short of exhilarating. Loud guitars, big drums, and two vocalists with powerful voices got the crowd moving and people excited. Their energy level was infectious and their set was a really fun ride from start to finish.

Meg Myers took the Riot stage armed with a Ukelele and opened her set solo. Even in this subdued arrangement, it was clear that this young woman had a powerful voice and when the rest of the band joined her on stage to start the second song, she showed just how powerful her voice was. Meg paced endlessly across the stage as she put on an amazing vocal performance that was somewhat reminiscent at times of Alanis Morrisette. The songs were very structured in pop and were super catchy with great choruses that get stuck in your head. Her vocal range and delivery was very impressive and people were dancing and the young ladies were singing along. The songs were really catchy and it was impossible not to get suck in by this great performance.

The legendary Fishbone made another welcome return to Riot Fest this year, this time to play their album, The Reality Of My Surroundings in its entirety! The album recently turned 30, which for us old timers is a scary thing to realize, but just like the band themselves, it aged well and it was a real treat for these guys to play the full album. Since they played the songs in order as they appeared on the album, it sadly meant that they would be playing their greatest rock masterpiece, “Sunless Saturday” last, which didn’t mesh well with us photographers who had to go shoot bands on other stages. That aside, their ska/rock/funk songs that preceded it all sounded great, and the band showed everyone a good time and got their feet moving. I if Fishbone was invited back every year to play the fest like Gwar and Andrew W.K. were, you would be hard pressed to find someone to complain about it. It is great to see such a great and influential band playing to the large audiences they deserve at a fest like this and having them do an entire album was a real gift.

Speaking of Riot Fest regulars, Anti-Flag returned once again to tear up a Riot Fest stage (and jump all over it). These guys seem to get more popular every time they come back and they had a massive crowd of rowdy punk rockers gather for them. The band blasted into “The Disease” too start their set and the audience blasted into each other going crazy. Bodies were flying, the crowd was moving and shouting along, and the band were moving all over the place to get them even more worked up. They blazed through 15 songs (one of which was a cover of The Clash’s “Should I Stay Or Should I Go”) and didn’t slow down for a minute!

As Living Colour was getting ready to take the stage, you could see professional wrestler, CM Punk, standing on the back of the stage waiting for them to come out. Punk’s entrance music is “Cult Of Personality” and he would come out before they played it this afternoon. Before that, however, the band put on a spot-on performance that really showcased not only how great they still sound, but just what skilled players the musicians are. They had a taste of popularity with their first album, but they don’t nearly get the recognition they deserve for being a stellar rock band with very unique and interesting musicianship. Hopefully they become regulars for the fest so hopefully the younger generations of Riot Fest fans can continue to be exposed to their greatness.

Over on the Roots stage, Thrice walked out on stage to a sea of people that spanned half way across that section of the park. They opened with “Scavengers” which is the single from their latest album, Horizons/East. The song has a really hypnotic grungy chorus and some interesting guitar leads, layered underneath somehow soothingly raspy vocals. It was a strong start to what ended up being a really enjoyable set. They debuted another song later in the set from the new album as well as playing some material from their recent past.

The Lawrence Arms haven’t played a show in quite some time and chose to return big by returning to Riot Fest. They have a long history in playing Riot Fest, going back to when the fest was happening in a variety of indoor clubs and an even longer history of being one of Chicago’s more popular modern punk bands. This three-piece band packs a punch and people love their gravelly voiced melodic punk songs. Brendan Kelley talked a bit between songs and always sounds like he’s drunk when he talks, but whether he was or wasn’t, either way the band always delivers the goods and the time away from a stage didn’t set them back one bit. It was like no time had passed and they sounded like they have been constantly playing.

The weather took a turn for the worse as dark clouds rushed in as the sun was setting and it started raining. Thankfully it wasn’t a huge downpour so the festival grounds didn’t take a turn for the worse, but it did make things wet and uncomfortable. The rain didn’t hinder the Circle Jerks from taking the stage and taking us in a time machine to they heyday of hardcore, where they were one of the premier bands of the genre. Keith Morris proved in one song that even in his face 60s he is one of the greatest punk rock vocalists of all time, and the band sounded like they hadn’t stopped playing. The last time the band played here was 2003 and this performance was well worth the long wait for them to return! They played a 33 song set that had just about everyone’s favorite songs included and there probably wasn’t a single song you’d want to hear that they left out. It was about as perfect a Circle Jerks setlist as you could ask for both in song selection and performance. Hopefully this reunion lasts more than this one tour and we get some more visits from these punk legends while we are all still around to enjoy it. What a treat it was to have them back!

Chicago’s own, Smashing Pumpkins headlined the day with their very first Riot Fest appearance. The lineup for the band this time featured three original members, Billy Corgan, James Iha, and Jimmy Chamberlain, as well as two more recent members. Billy came out on the stage sans-guitar with his face all painted up and wearing some odd looking robe. It was puzzling to say the least. They opened with “The Color Of Love” which is a new song that they played for the first time this evening. It was more of a dance number than your typical Pumpkins fare and aside from Billy’s voice it really sounded like a different band and he even danced a little bit around the stage. If people were taken aback by their choice of a set opener, their concerns were quickly erased when the band followed up with “Bullet With Butterfly Wings” which made people go crazy. If that wasn’t enough, they followed it up with “Today”!

From there the band pieced together a nice set that touched on many of their popular hits, along with some deeper cuts, songs that haven’t been played in years, and even had a guest appearance by Meg Myers to perform, “Eye”. The band sounded excellent and well-rehearsed and even the band’s critics (and more specifically Billy Corgan’s critics)would have trouble finding much fault in the set aside from the singers odd wardrobe choice. Their 90 minute set was a great way to end the day and it was even better that such a huge headlining rock act is one that was homegrown. Even another wave of rain didn’t stop the fun!