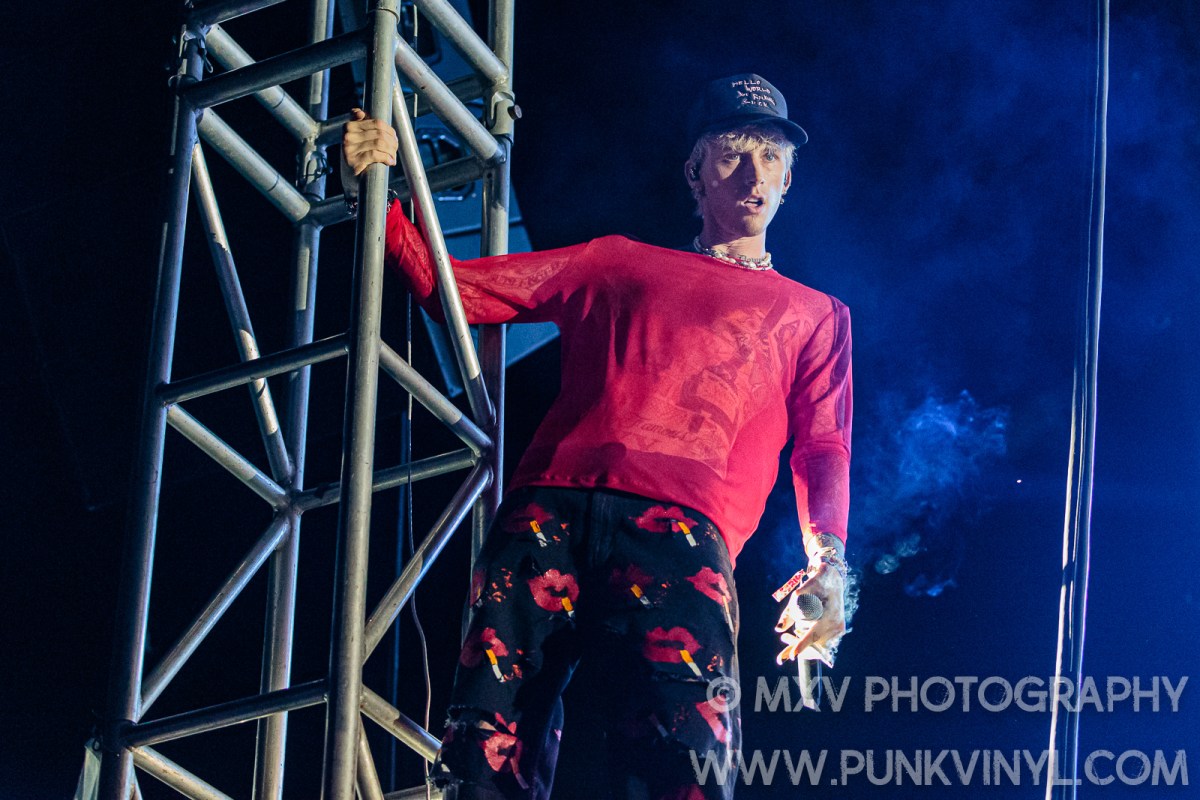 Sunday was the final day of Riot Fest 2021. The weather was perfect and there was an amazing assortment of bands playing that day to end the four day festival with a real bang. The action once again started early.

Airstream Futures are a really great Chicago area band which features the “man of 100 bands”, Jeff Dean on guitar. This four-piece is evenly split between male and female members and features Devon Carson on vocals, who has a really great voice that perfectly compliments Airstream Future’s music. The music is mostly mid tempo, driving punk rock with crunchy guitars and strong rhythms. Carlson’s soothing yet strong vocals is the icing on the cake to this excellent, underrated band that should be on more people’s radar. It was a great way too start off the day.

Health made a return to Riot Fest this year and thankfully weren’t plagued with any technical problems this time out. This three-piece is such a unique band that mixes heavy electronics and noise with live instruments to lay a thick, layered sound and it is topped off with soft and melodic, higher pitched vocals. At first when you hear the music you’d expect heavily processed or aggressive vocals but they way the singer’s voice mixes with the tempo changes really works and sucks you it. The music is beautifully dark and melancholy and it still packs a real punch and has interesting and abrupt tempo changes. They are really something special and keep getting better as they age. This band is a must-see and if you haven’t heard their music you need to fix that immediately!

K. Flay also made a return to the Riot Fest stage this day. Much like last time she and her band played hard edged pop music with an interesting twist of adding some electronics and enhanced low-end. She got people dancing and singing along and also tried to knock them on their ass with some low frequency rumbling. She didn’t hold still for a minute and was stomping, marching, and dancing all around the stage as she delivered a strong vocal performance. She has some really good songs that would even appeal to us jaded old punk rockers!

Body Count was next and features the legendary and multi-talented Ice-T on vocals! Not only is Ice-T a legend of rap music and a well-respected actor, but he also can hang with the best in the world of rock and metal music. Body Count put on a heavy metal clinic, starting off with a surprising cover of Slayer’s, “Reigning Blood” which was quite good and showed off what skilled musicians the band members are. Ice’s vocals were as strong as ever, as was his stage presence. The crowd went nuts, too many bodies to count went flying, and everyone had a great time. They played a handful of their own material after the Slayer cover and ended the set with their infamous “hit”, “Copkiller”. Good stuff!

Anthrax were another late addition/replacement to the festival and they were a welcomed addition for sure. They reached heavy metal legend status years ago and have actually somehow gotten even better live as the years have passed. They cranked out an amazing set of most of their popular songs and the crowd went bananas the entire time. There was a huge sea of rowdy people gathered to see them and Anthrax gave them everything they wanted and then some. Over 35 years later they are still one of the best heavy metal live acts around anywhere.

Punk/new wave pioneers, Devo, took the stage next. They opened their set with some cool and funny video intro that segued into them playing “Don’t Shoot (I’m a Man)”. They quickly followed it up with “Peek a Boo”. While they played, they had a variety of custom themed images being displayed on the huge screen behind them. They were spot-on and it was nice to see them playing to such a huge crowd. Once they got to “Girl U Want” and “Whip It”, they just knocked out one great old classic after another, including the crowd pleasing “Uncontrollable Urge” and of course ended with “Gates Of Steel”. It was a rock-solid performance and I sure hope they come back for more at a future Riot Fest.

The Flaming Lips were back again and as always delivered a visually stunning performance. They had to scale a few of their gimmicks back for safety reasons during this pandemic, and Wayne Coyne was wearing a mask most of the time while performing (while he wasn’t in the bubble that is, which he kept on stage and didn’t walk into the crowd with it), but that didn’t take away from their great set. If you’ve seen them before you know what to expect and they delivered every way they safely could. Even if you aren’t familiar with their music, they are so visually entertaining that it’s impossible not to enjoy it.

New Found Glory made the kids go wild with their pop music. The kids went apeshit, the band were full of energy, and their stage was dressed up like an amusement park. It was visually interesting, though rather dark.

Machine Gun Kelly drew a massive crowd of mostly young kids whoo were dying to see him. He came out and seemed rather full of himself, was smoking while playing in an attempt to look “cool and edgy” and even started talking shit about Slipknot, who were playing at the same time on a bigger stage. It got him some press, which was probably the point, but what he probably fails to realize being so young and cocky was that Slipknot was playing the bigger stage because they built up a loyal following that has spanned a couple of decades. When MGK can prove he’s not some flash in the pan and if he becomes an act that people remember instead of dispose of, then maybe he’ll be playing the bigger festival stage some day. But maybe not with that shitty attitude.

During his set, the young audience seemed to know every song he did which actually was impressive. His music was pretty standard fare pop-punk. He climbed up the scaffolding of the stage and sang from up high at one point, and he also played guitar at others. His raspy vocal was a good fit for the style of music he’s playing and his performance was alright, it just would’ve gone over better without the brazen attitude.

Much like the end of summer is a sad day, so was the end of Riot Fest because it is hard to say goodbye after such a wonderful weekend. It will be a long year waiting to do this all again but what a way to end the summer!