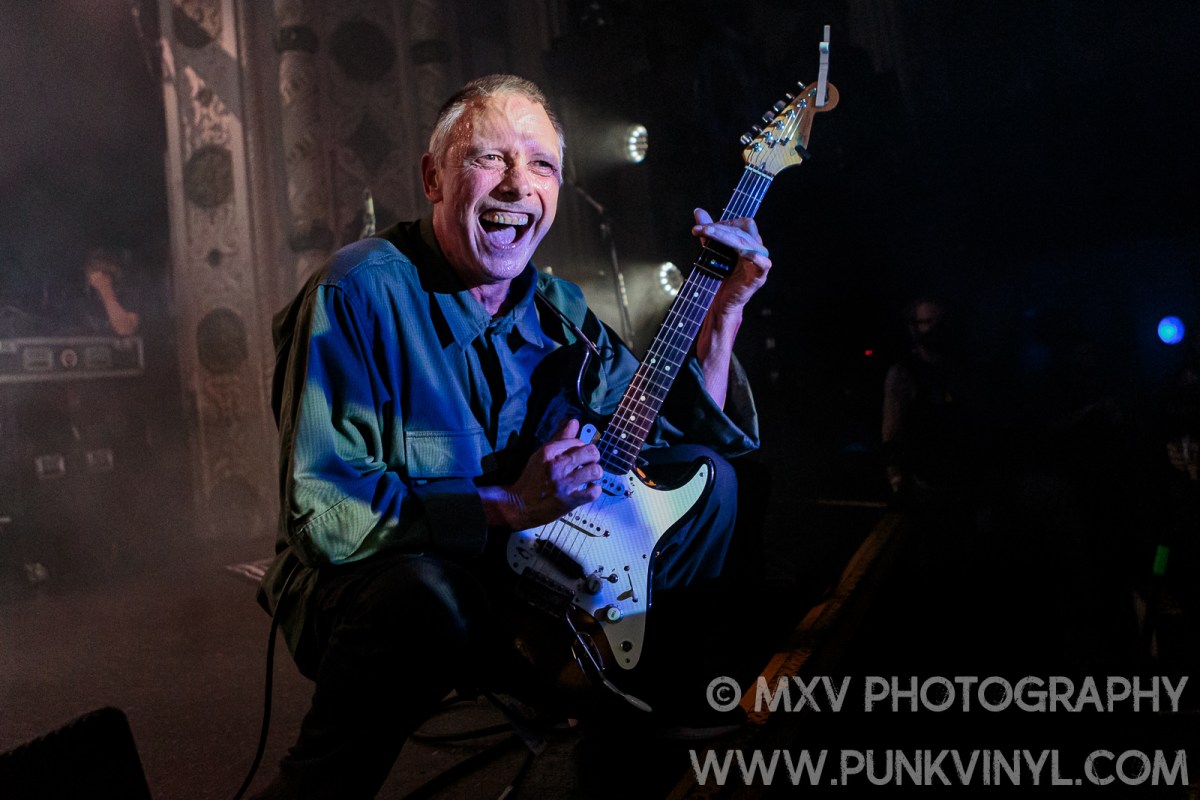 The beginning of fall signals many things, but the best thing that it brings is the annual Cold Waves Festival at Metro. This industrial/darkwave festival started nine years ago as a tribute to the late Jamie Duffy, and it has grown to be a wonderful gathering of like minded individuals to not only honor the memory of Duffy, but raise awareness of topics like suicide awareness and depression. This annual weekend of shows also features nightly raffles to benefit Darkest Before Dawn, and the entire vibe of the event is very warm and welcoming. All of this, of course, also revolves around a lot of really great, like-minded bands performing and we once again were treated to some really good ones.

Rhys Fulber of Front Line Assembly took the center stage, standing at a table surrounded by various electronics. As video images were projected behind him, Rhys manipulated the various devices on the table and delivered a steady stream of electronic music. The music was more techno and ambient than his usual work in FLA, and the whole set blended together like one large piece. It was pretty interesting overall, but also seemed to serve more as background music as the set wore on. It was neat to see Rhys doing something different from his great work in Front Line Assembly, the man is a real talent.

Gost was up next and proceeded to steal the show! They played a really great blend of synthwave, industrial, and a little hint of metal thrown in for good measure. Great beats, layered, textured music, and the singer had a great goth voice but would occasionally break out some guttural black metal growls too. They had a great sound and it was a stellar performance that was the true highlight of the evening and the crowd was really digging them.

Dalek was next and they were fairly unique compared to the other bands of the evening. This two-piece had layered industrial music with rapped vocals. The music was really interesting and catchy and the vocalist had a great, booming voice. What may sound an odd blending of styles on paper, worked really well and sounded very fresh. It was great to see the crowd felt the same way and these guys got a very warm reception. They were excellent!

Consolidated was the final act of the evening and it has been quite some time since they’ve played a show here. Front man, Adam Sherburne commanded most of the stage while musician Mark Pistel and a live drummer flanked the sides of the stage, hiding out in the shadows. Sherburne handled all vocal duties as well as live guitar and paced all around the stage as he performed the band’s politically charged blend of hip-hop, rock and industrial music. They played some classics such as “America #1”, and “Product” as well as some newer material. They also did a cover of a Yeastie Girlz song which is something you’d probably never expect any band to do but it made great sense seeing as the two bands shared some similar values and beliefs.

It was almost eerie how much of the subject matter of Consolidated’s music from 30 years ago still applies today and if there was ever a climate ripe for a band like them to exist in, now is certainly the time so it was very appropriate to have them headlining the first night of this weekend festival. Their old material has stood the test of time nicely, the band hasn’t lost a step in all this time, and they put on a top-notch performance that was a nice end to the evening.