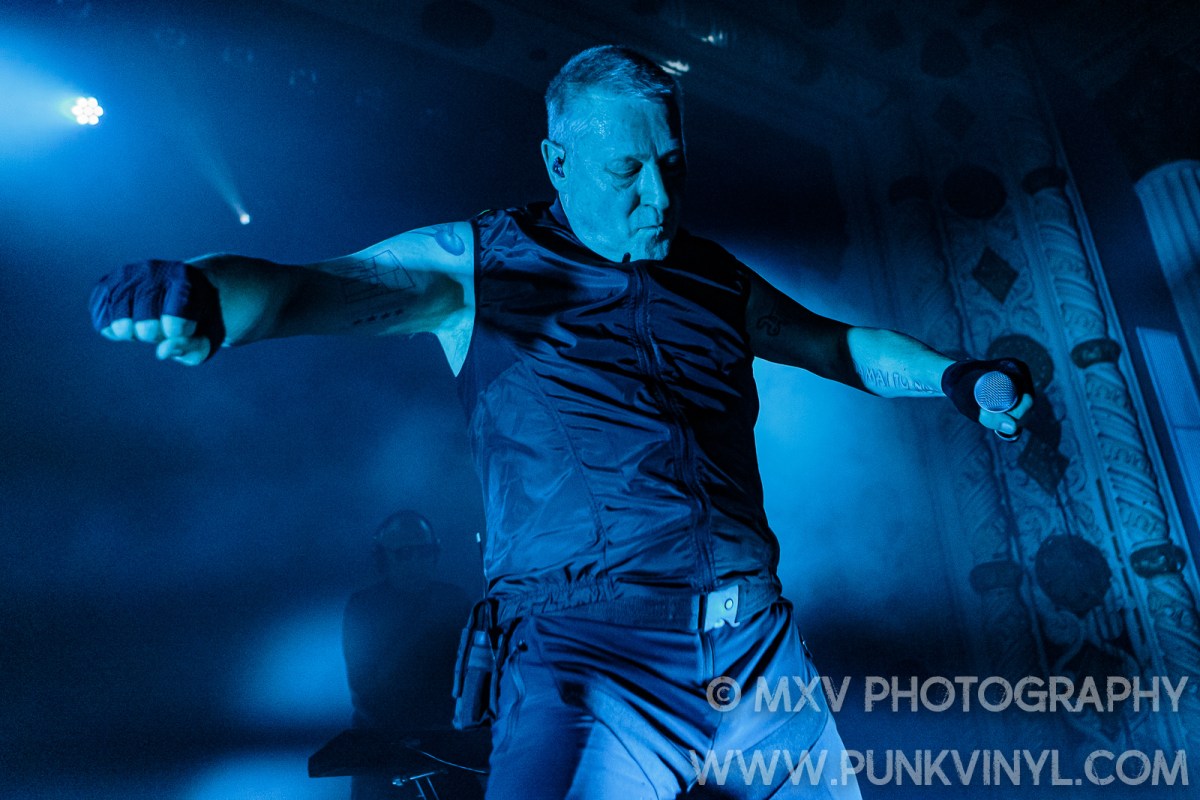 Saturday night was the second night of Cold Waves IX at Metro, and the most stacked lineup of the weekend. It featured some legends, some returning acts, and a pair of legends teaming up for a set of great music as well. The club was also packed and there was excitement in the air.

Panterah was up first. Why you would name yourself so similarly to a world renowned metal band was quite puzzling and a rather poor choice in your band name. Panterah, not Pantera, was a one-woman show and her music was really good, as was her voice and stage presence as she delivered around 30 minutes of darkwave.

Provoker was up next. They were a surprise hit of the evening with a fantastic set of goth/post-punk. Great, danceable tunes and their vocalist had a really nice, soothing voice that was downright hypnotic at times. They wore their influences clearly on their sleeves and they would’ve fit perfectly in the early 80’s post-punk scene had they been around back then. That sound has aged well and it was really nice to hear a newer band picking up the torch of such a great sound and carrying it forward.

Adult. was next and made a welcomes return to Cold Waves. This duo has been around for over 20 years now but in the past few years have really taken their already great music to a whole new level. They’ve been consistently knocking it out of the park with their recent material and their live shows are always fantastic. Tonight they turned it up another notch and more than made up for the two years off the road. Vocalist, Nicola Kuperus, is a mesmerizing front-woman with her unique dual microphone delivery as she dances around the stage. Her unique voice commands attention as partner, Adam Lee Miller, provides the musical landscape with an array of instruments and electronics. Their set focused heavier on their best, most recent material and each song sounded better than the last. By the time they hit the perfect one-two punch of “Hand To Phone” and “Lick Out The Content” they easily had floored the entire audience. It was an amazing set and hopefully they become regulars on the Cold Waves stage so every year we can be treated to such greatness!

Two industrial music legends reunited once again to celebrate some of the most popular work they were a part of in the heyday of the Wax Trax scene. Paul Barker and Chris Connelly teamed up this night to present a set of some of the best Luxa/Pan produced Ministry side-projects. These projects were some of the most beloved releases on the Wax Trax Records label. For this set, Barker handled all the music (and some background vocals) while Connelly handled all of the vocals, as he sang most of the songs the two played this evening on the various records they originally appeared on. They opened the set with a huge favorite, Acid Horse’s “No Name, No Slogan” and the crowd immediately started dancing. From here they played a couple of songs from the Revolting Cocks’, “Linger Ficken’ Good” album which was unexpected as that was easily their least popular album, but it was cool to hear them play some material that they haven’t done in recent appearances. Everything sounded great and some of the many highlights included “At The Top” (perhaps the most criminally overlooked Revolting Cocks song), “Show Me Your Spine” (PTP) and the crowd pleasing “Rubber Glove Seduction” (PTP). It was a really good time hearing the duo bust out so many classics from the past.

Front 242 took the stage amidst a sea of fog and strobe lights and these 40 year veterans once again proved they have a fountain of youth as they played over an hour of non-stop electronic body music that they made famous. They played a lot of old favorites such as “First In/First Out”, “Don’t Crash”, “Quite Unusual” and “U-Men”. Each sounding even better than the last. Near the end of the set they busted out the heavy hitters, “Headhunter” and “In Rhythmus Bleiben” before leaving the stage and ending the night with a two-song encore of “Welcome To Paradise” and “Until Death”. It was an amazingly fun and energetic set that had the entire audience moving, which was a great way to close the evening.

The second night of Cold Waves IX was as great of an evening as you could have asked for, especially after a two year absence, it was really good to have it back again!