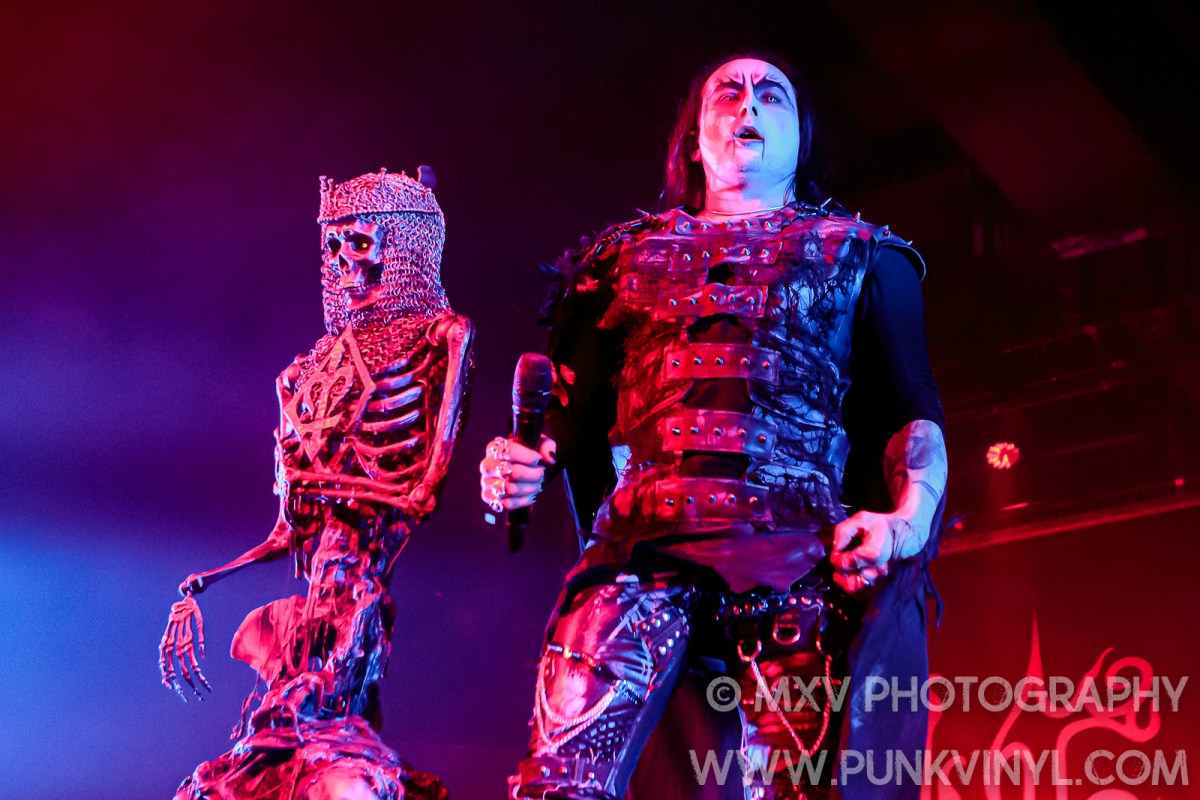 Saturday night, Cradle Of Filth made their long-awaited return to Chicago to headline a night of metal at the Concord Music Hall. They were originally touring with 3 Teeth and Once Human, but both bands had to drop off the tour shortly before the show and they had to find some local acts to play the show on pretty short notice.

First up was Advorsa. These guys were a pretty straight-forward death metal band. The songs were heavy, mostly fast-tempo with some varied breaks, and the vocals were growled and powerful. They had a lot of energy and played skillfully. It was a solid warmup act for this show and the crowd seemed to be into them.

Without Waves was next and they really were unique. This post-metal band blended a lot of varied musical styles such as technical metal, noise-rock, math rock, atmospheric rock, and more. They were all over the place with odd time signatures, experimental guitar sounds, and sometimes they’d start and stop on a dime. The vocals mix growling and some more accessible singing As a fan of all the genres they incorporated in their lengthy songs, it was a really interesting musical journey through their setlist. They seemed lost on the less open minded members in the audience but for those with a bigger musical palette, they were refreshing.

After what seemed like a really long setup which had the crowd chanting for them to play, Cradle Of Filth took the stage and the crowd was excited. The stage was set up with the most amazing looking mic stand, which was a skeleton complete with illuminated eyes, and a few platforms for singer/band leader, Danni Filth, to tower above the audience as he delivered his trademark shrieking and growling vocals that the band is famous for. The drummer, who is a wonder to watch, was tucked away in the back corner behind a plastic shield and the keyboardist/female vocalist was in the other corner. The three guitarists flanked either side of the stage and spent a considerable amount of time moving back and forth to interact with different sections of the audience in front.

While this may sound like any given Cradle Of Filth show, for this tour they were playing Cruelty and the Beast in its entirety, which is something they’ve not done before and it also just happens to be one of their two best albums (Dusk and Her Embrace being the other, and best one). To have this band, who has a brand new album coming out in less than two weeks, do a tour playing one of their most beloved albums in full is something pretty special and man did the band deliver the goods. They played the entire album, in order, flawlessly, save for one technical problem in the beginning of “Bathory Aria”, which required a restart of the song after solving it, but Danni made light of the situation and was quite comical about it. Truth be told, the audience was enjoying them so much that no one cared about the issue and was just happy to have them keep playing. And play they did!

Not only did they play the aforementioned album, but when they were finished they played nearly 40 more minutes of additional songs, starting with a cover of Iron Maiden’s, “Hallowed Be Thy Name” as well as four of their own songs. One of the songs was a new one from their forthcoming album and if that’s any indication of what the album is going to sound like, it looks to be another good one. In all they delivered 90 minutes of amazing music in a performance that had the crowd moving nearly the entire time. It was well worth the wait for them to come back and it seems that Cradle Of Filth still have a bright future ahead of them as well.