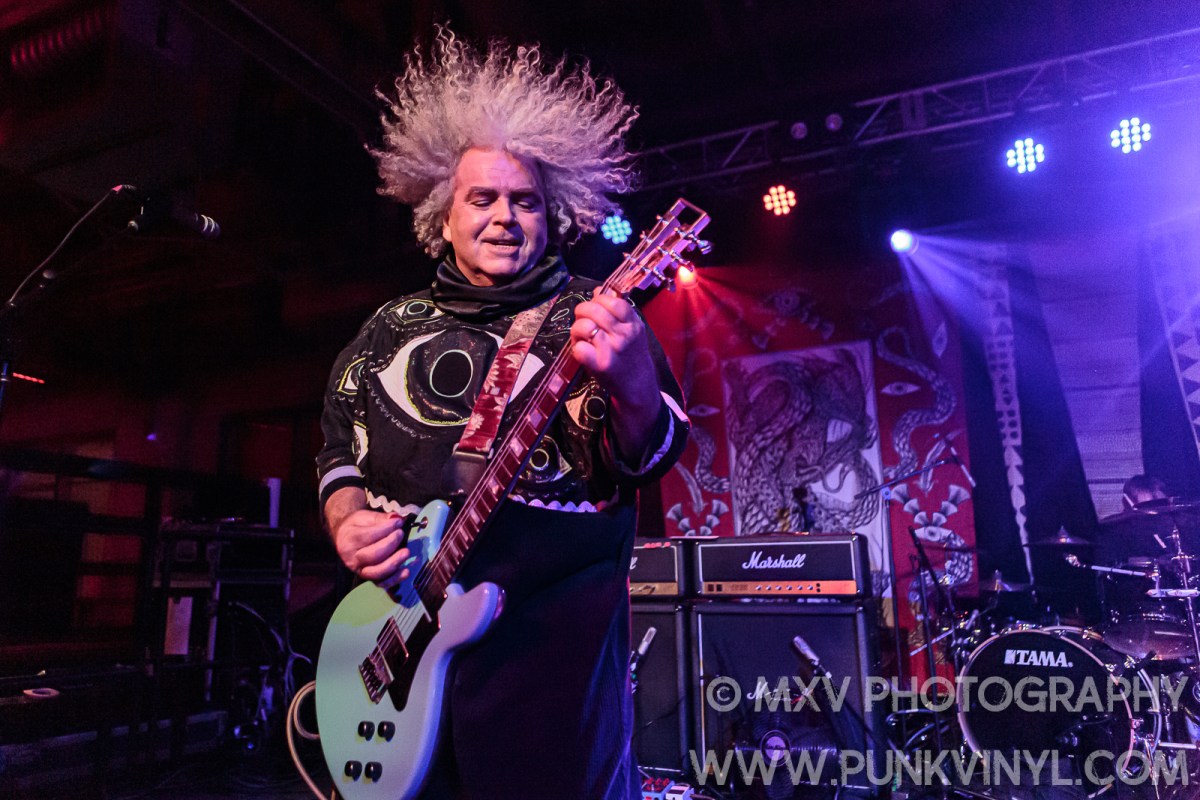 Events at the House Of Vans are always a special event, but it is even more special when the event is the first one in two full years. Saturday night, House Of Vans finally reopened its doors for one night for the return of the HalloWolfBat event! The last event there was the HalloWolfBat show that featured The Hu and it was a really big deal. The return of the event featured the legendary Melvins! They were joined by Coven and Heavy Temple.

Due to the ongoing pandemic, this event was done with a limited capacity which was about half the usual sized crowd they allow in the venue. The RSVP list reached capacity in mere minutes and those lucky enough to score a ticket were in for a treat. The venue was decorated with these great giant sized creatures which at times would come to life and fight each other in the middle of the crowd. The venue also gave away some cool swag themed for the event like masks and pins. Everyone felt like a VIP at the place, the staff was incredibly friendly and caring, and the place had such a great vibe with people dressed up in various costumes and enjoying each other’s company while waiting to see some great musical acts.

First up was Heavy Temple from Philadelphia, PA. This three piece (with a substitute guitarist for this show) were quite enjoyable. They played a mix of space rock, heavy metal, stoner metal, and even a hint of Seattle based grunge sprinkled in there at times. The female bass player/vocalist had a good booming, melodic voice. They really pushed a lot of good buttons in their songs that appeal to a wide variety of musical interests and were well worth getting there early for.

Next up was veteran rock band, Coven! The band stared here in Chicago in the late 1960s and is amazingly still at it, albeit with vocalist Jinx Dawson being the only original member. They had a very theatrical opening to their performance with everyone dressed up in costumes, a casket, and plenty of candles. Jinx was wearing a mask during the first song while the rest of the band were all in hoods and the guitarists had 60’s appropriate busy mustaches! There was a lot of chanting and general eeriness and behind them was a screen that displayed various images. After the first song, Jinx shed her mask and the rest of the bands took off their hoods and they proceeded to play a 45 minute set of some excellent occult rock/heavy metal. Their songs really were more in a straight up rock style more than what is considered contemporary heavy metal these days, but there is still plenty of heaviness to their music and the occult themes of their songs certainly appeal to heavy metal fans. At various times Jinx would have some small props like skulls to aid her performance and the band sounded great, as did her trademark vocals. It is amazing that she’s still at it after all these years and still kicking ass. They were really a lot of fun and what a treat to get to see any form of Coven playing in 2021, especially at Halloween time!

The Melvins took the stage to a very excited audience and they wasted zero time pummeling the audience with their heavy music. As soon as they started, Buzz was pacing in a circle around the stage as the band started the intro to the amazing “Kicking Machine”. What a great way to start their set! The lineup for The Melvins has remained in tact the past couple of years and features founding members Buzz Osborne (guitar/vocals) and Dale Cover (one of the greatest rock drummers of all time)along with bassist Steven McDonald of Redd Kross fame. Every variation of The Melvins lineup has been nothing short of amazing and this one is no different. The three members play like a well-oiled machine that has been running flawless for a lifetime. Their timing is perfect, they are super energetic and they are so heavy that they’ll knock you on your ass, and so unique and complex that they’ll also having you scratch you head wondering how they come up with this stuff, let alone play it so effortlessly. I guess nearly forty years of non-stop recording and touring will do that to a band, but what’s so incredible is the quality of their output keeps getting better.

The band wasted zero time between songs. It was extremely rare that they even stopped between them, usually just blending one song into the next which left you zero time to catch your breath. There was absolutely zero talking between songs by any band members, they just got up on stage and kicked everyones ass and didn’t stop until there finished the final song on the setlist. Some highlights of their absolutely flawless set included “Halo”, “Queen”, “It’s Shoved”, “Amazon”, “Hooch”, and the show closing, “Nightgoat”. They were relentless and people were banging their heads and jumping up and down the entire hour they were playing. The Melvins are easily still one of the best live acts you’ll ever see and they show no signs of slowing down. It was a real honor to have them headline this special event and what has quickly become one of the best music venues this city has ever seen.

HalloWolfBat 2021 was something special and one that even eclipsed the 2019 edition. Kudos to House Of Vans for putting this unique event together and making it so safe and fun. It was a spectacular way to ring in Halloween!