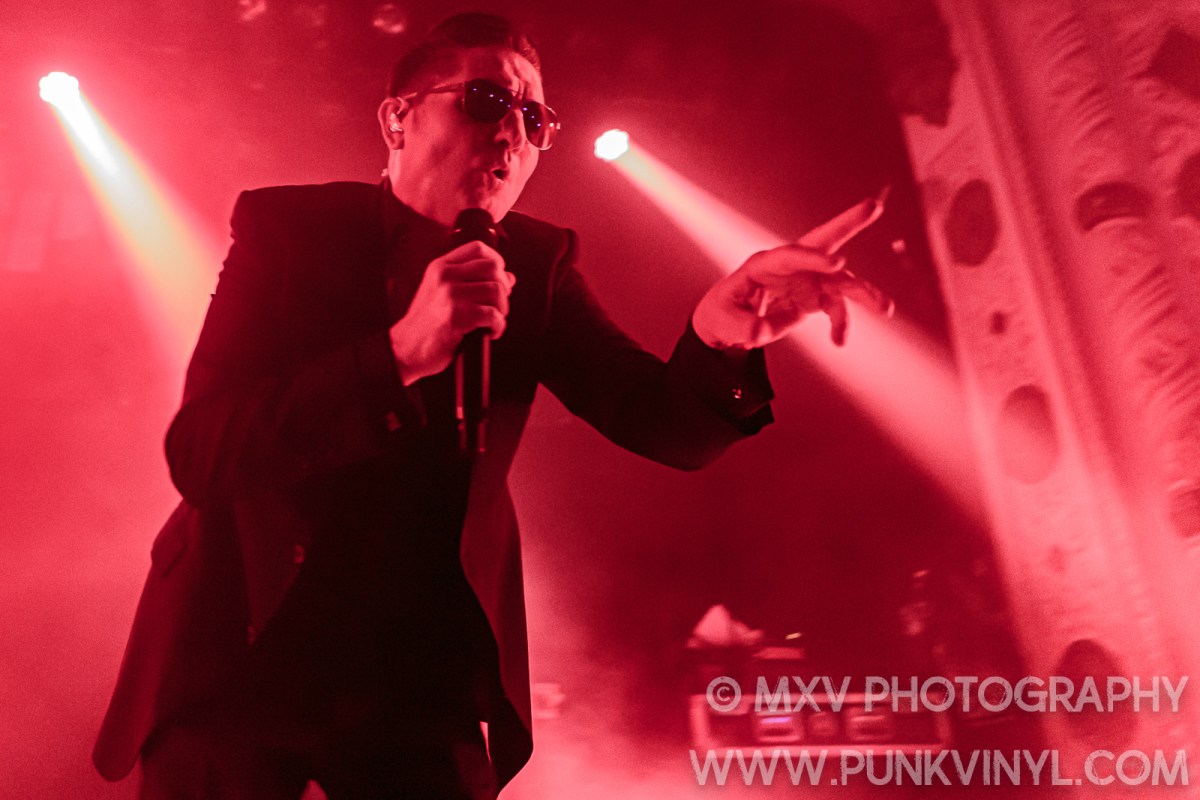 Thursday night was an exciting night for industrial music fans as the legendary Nitzer Ebb made their return to Chicago after being off the road the last two years (thanks to the pandemic). After being cooped up for the better part of the last 18 months, music fans were clamoring for a night like this and the place was packed full of people. The evening started off with a very enjoyable DJ set by Patrixia before the two live bands played.

First up was Panterah, who we recently saw on the Metro stage two months ago during the Cold Waves festival. This time out she stepped it up a notch with her performance. She’s a one woman show, all the music was on a backing track and she performs all her vocals live. She started the set towering over the audience on top of a large box as she danced, sang, and seductively writhed around. Her music mixed industrial dance with goth and a little post-punk. Her vocals have a varied range and a really hypnotic quality. As she performed and danced around the stage, it was impossible not to be completely mesmerized by her. The music was extremely enjoyable and she’s a striking front-woman. Her set was really enjoyable and a huge step up from her Cold Waves performance, which was also quite enjoyable.

Nitzer Ebb closed the evening by getting most of the main floor of the audience and some in the balcony off of their feet and moving their bodies. Purveyors of some of the most beloved industrial dance music since the 1980s, Nitzer Ebb once again proved why they’d be included in the Mount Rushmore of industrial bands by delivering a rock-solid 90 minute set.

The band opened the show with “Blood Money” as lead singer, Douglas McCarthy paced endlessly back and forth across the stage as he delivered his vocals as smooth as butter. Decked out in a suit and sunglasses, he oozed cool as he casually moved about, delivering his trademark vocals. The two musicians were further in the back of the stage and had their hands full the entire evening mixing and creating sounds for the songs. They presented the set not as an evening full of individual songs with breaks between, but by mixing one song into the next and blending them into one another during the transitions which made it feel like a live DJ set in a way.

After playing a couple of newer songs, the band started peppering in the heavy hits throughout the remainder of the set. The pacing was really smart as they’d sprinkle in the hits at all the right places to have waves of excitement from the audience as they heard some newer or deeper cuts, then get hit with a one-two punch of “Getting Closer” and “Lightning Man” before delving back into a less familiar song or two, only to repeat the process.

Speaking of the hits, the band pretty much covered all the bases beautifully and when they got to “Join In the Chant” and “Control I’m Here” nearly the entire audience was dancing around. Bodies were moving everywhere and the Metro transformed itself into a dance club for much of Nitzer Ebb’s set. A twin attack of “Let Your Body Learn” and “Murderous” closed out the main set and the band returned with a three song encore of “Violent Playground” “Alarm” and “Cherry Blossom”. It was a hell of a good set overall that satisfied long-time fans and was another welcomed return to live music.