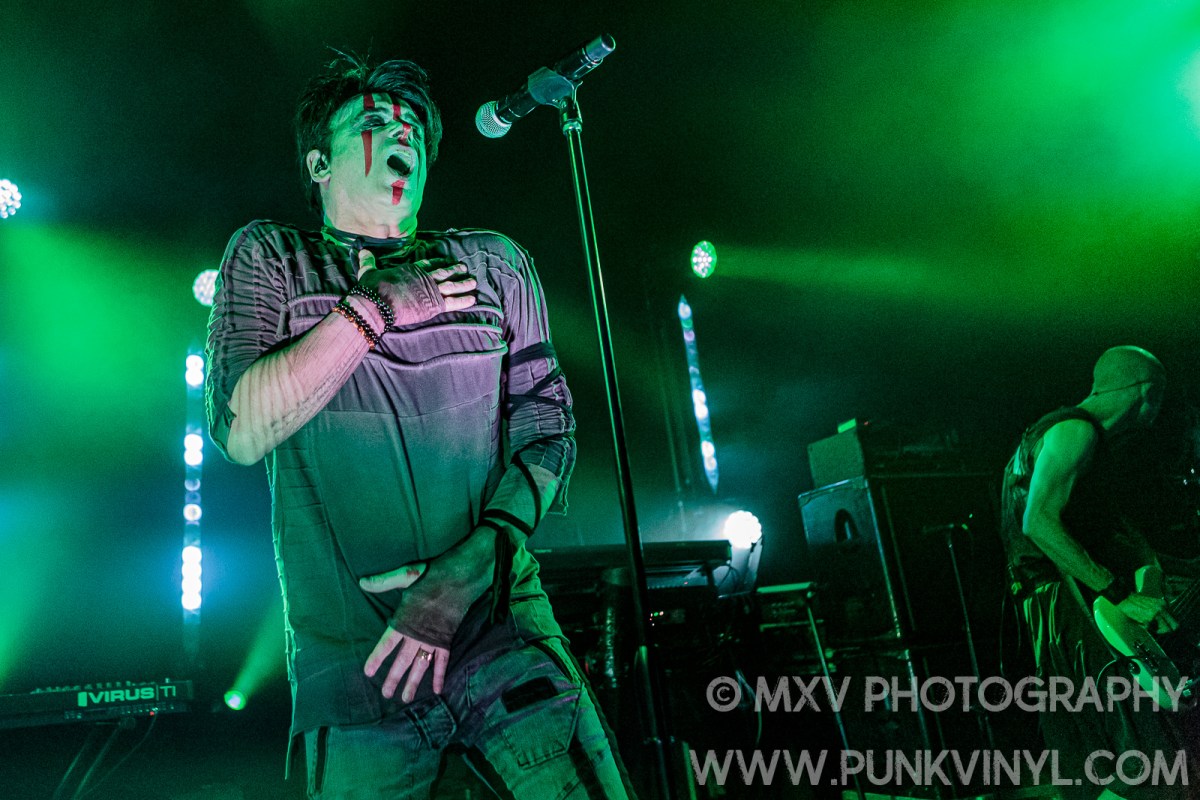 Last night saw the long-awaited return of Gary Numan to Chicago when he headlined a show at the Park West. Much like the rest of the world, the last two years were challenging for Mr. Numan. He released his most recent album, Intruder, in the middle of the pandemic to much critical acclaim, but then had to cancel the tour he had planned to promote the album because of said pandemic. That tour got rescheduled to the present and thankfully this time the tour went ahead as planned. People were eager to see Numan perform and he has a very loyal fanbase that turns out in droves in every major city he plays. This night was no different as the Park West was filled with excited fans that were not only happy to be back seeing live music, but to see Gary Numan in particular. There was a buzz of excitement in the air from the moment the venue doors opened to let the long line of fans waiting outside in.

I Speak Machine was first and is the opening act for this entire tour. It is a one-woman experimental music act that is the brainchild of Tara Busch. She had a couple racks of musical gear and a microphone. Her electronic based music really had a lot of twists and turns. One minute it sounds like a machine aggressively churning as she’s growling and shouting, and moments later she’s wailing like an opera singer behind more subdued songs. It worked quite well in places and not as well in others, but it was always interesting and unpredictable. Tara had a strong stage presence and easily kept the audience’s attention throughout her 35 minute set that ended with a nice round of applause from the crowd.

After the stage was cleared, the lights went out and Gary Numan and his bandmates took the stage to a very eager crowd who immediately started cheering in excitement. The lights slowly came on as the band opened the set with “Intruder”, the title track for Numan’s latest masterpiece. Numan was decked out in the outfit he was wearing in the cover art to Intruder, right down to the face paint. This seems to be theme as he did something similar on the last tour he did for Savage. It is a really nice touch and ties in to the album he’s touring for, giving a theme for the performance. The band sounded amazing and played the song (and all the songs that followed) to perfection as Numan’s trademark vocals sounded as good as ever. The man seems to have an endless amount of energy and it is clear that he really gives all he has into his performances and then some. The band went back to The Pleasure Principle for the second song with the ever-popular, “Metal” for the second track. With a live band playing the song, it comes across far more powerful than it did on the album and that just took an already great song and made it that much better. The band doesn’t waste much time between songs at all, they go into the next one very quickly upon completing one and that kept the energy level high in the audience.

As Numan and the band performed, there was some pretty amazing, yet simple lightshows happening on the stage. The backdrop was a series of vertical light strips that looked simple yet did some really interesting visuals that complimented the music beautifully and there was no shortage of flashing strobes and various other lights. The musicians were largely lurking in the shadows of these lightshows while Numan was front and center of the bright spots which illuminated him as he was singing. The setlist featured some songs from Intruder as well as some of the best songs from his last few albums such as “Bed of Thorns”, and “My Name Is Ruin” from Savage, “Everything Comes Down To This”, “Love Hurt Bleed”, and “Here In The Black” from Splinter, as well as some songs from the couple of albums prior to those. There was a nice handful of early Numan favorites sprinkled in the mix too and their placement was well thought out which resulted in excellent pacing for the 90 minute set. Classic highlights were the usual suspects of “Down In the Park”, “Films”, “Cars”, and the set ending, “Are Friends Electric”, which was the second song in the two-song encore.

It seems that the older he gets, Gary Numan just keeps getting better as a live performer and he’s been on a roll in the past decade or so of releasing consistently great albums and shows no signs of slowing down. Last night’s set was a flawless performance that left a full house of fans extremely happy and is a show that people will likely be talking about for many weeks to come.