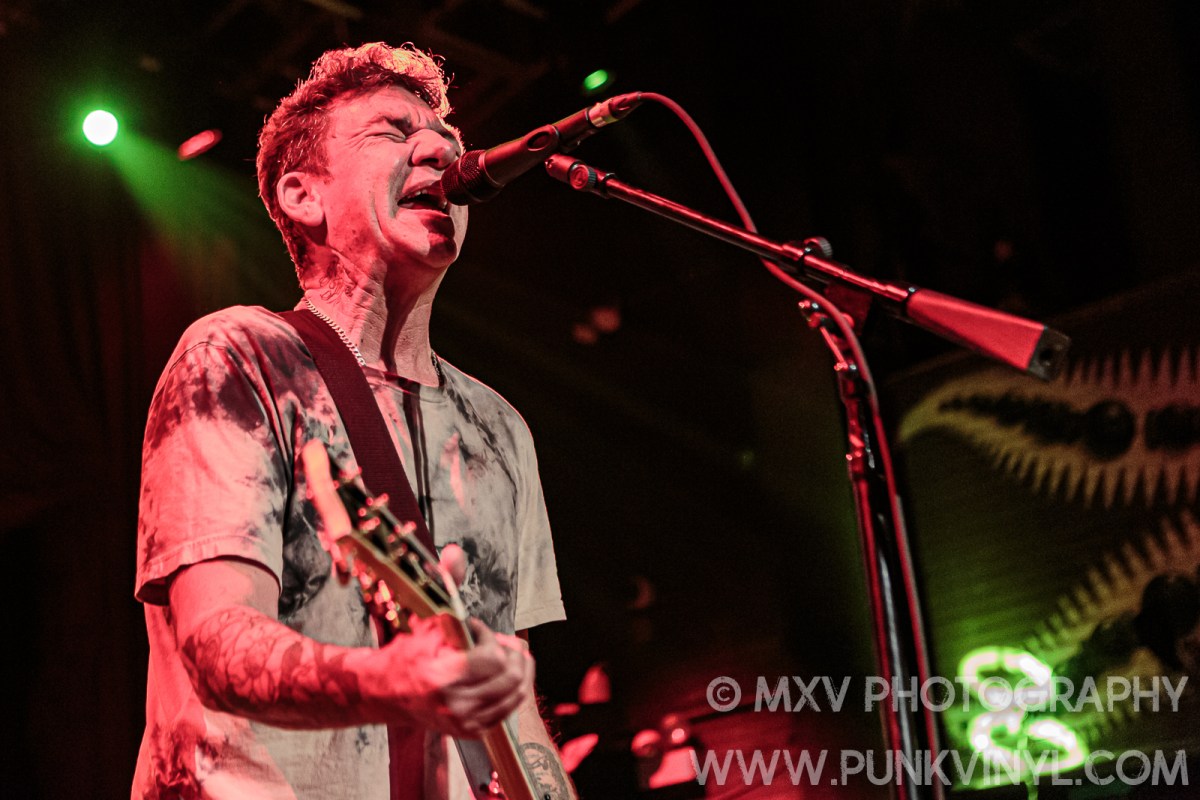 Just a few years ago, the idea of Jawbreaker playing shows again and being an active band was just the stuff of fantasy for their fanbase, a fanbase that grew exponentially the more years they’d been broken up. Through some sort of miracle that was thanks to Riot Fest, Jawbreaker did reunite and since then they’ve been playing shows here and there the past few years (minus the last two years the world was closed due to Covid). Currently the band is on their biggest US tour in decades in order to celebrate the 25th anniversary of their last studio album, Dear You. Wednesday night was the first night of a four night run where they promised to play the entire album and then some.  They had a stellar array of opening acts as well.

First up was comedian, Irene Tu. It was unusual to have a comedian opening up a rock show but also a great and diverse idea. Irene delivered a very entertaining and humorous set with material that focused a lot of current events, especially vaccines, the pandemic, and sexuality. She had a strong stage presence and good material. If her touring with Jawbreaker leads to comedians being regular acts at shows then the world would be better off for it!

Just a few minutes after Irene finished her performance, Chicago’s own Smoking Popes took the stage to an already packed house. They were a bundle of energy from the moment the curtain opened as they opened with “Simmer Down”. They sounded great as they delivered a nine song set that was full of their strongest material. Highlights included “Gotta Know Right Now”, “Rubella”, and of course, “I Need You Around”. The band has a history of touring with Jawbreaker back when Dear You was released, so it was a perfect fit having them be part of these Chicago shows celebrating that album’s anniversary.

Built To Spill was next. This was a big change in sound as they fall more into the indie rock category. This three piece, which features and all-female rhythm section, played lengthy complex songs with interesting guitar work akin to Dinosaur Jr, and a lot of interesting changes. They would get kind of jammy at times with prolonged instrumental passages in their songs, but were always interesting. The bass player seemed to always have a smile on her face while playing which was a contrast to the singer/guitar player who was all business up there singing, playing guitar, and manipulating an impressive amount of guitar effects. They were really enjoyable.

The entire audience was buzzing with excitement when it was time for Jawbreaker to play. A scan of the audience revealed just what a wide reach the band has with their audience that spanned multiple generations. There were men and women ranging from people in their late teens to people well into their 50s. Many people in the audience weren’t even alive or may have been toddlers when Jawbreaker released Dear You, and others were there and fans of the band since their inception. It really was something special to witness, all these people gathered together with their love for this band uniting them. The band opened their set with “I Love You So Much It’s Killing Us Both” and the crowd was bouncing up and down, raising their arms, and many were singing along (but thankfully not louder than the music). Speaking of the music, the sound was SPOT ON in the venue. It was amazing how well it was mixed and at just the perfect volume. Also of note was that Jawbreaker is a four-piece on this tour as they added a second guitar player. This addition really makes the sound so much fuller, as a matter of fact they’ve never sounded better. Hopefully this is a permanent addition to the touring version of Jawbreaker.

They quickly followed up with “Save Your Generation” and then strayed from Dear You to play “The Boat Dreams From The Hell” which was a huge crowd pleaser. The band was really on their game this evening and between the additional guitarist and the amount of energy and enthusiasm the band was displaying on stage, they have never sounded better since reuniting. The time on the road this year, and the two years of a pandemic really did wonders for Jawbreaker and they are better than ever in a live setting (and they were always a great live band). Blake was back to his witty and humorous between-song banter as well. Seeing Jawbreaker on stage this night, playing these great songs, really made it feel like no time had passed and they’ve been around this entire time.

The band mostly delivered on their promise of playing the Dear You album, with the exception of “Lurker II: Dark Son Of Night” which is totally forgivable because the other songs they played more than made up for it. They also didn’t play the album songs in the same order as they appear on the record which was a nice way to mix things up. The “and then some” we got this night came in the form of “Condition Oakland”, “The Boat Dreams From The Hill”, “Boxcar” “West Bay Invitational” and “Kiss The Bottle” (which was the show closer). It was a totally flawless set, the Dear You songs have never sounded better, and it was just 90 minutes of pure Jawbreaker bliss. It is amazing that decades later, after a breakup that lasted 20 years, that Jawbreaker are not only back, but are playing as good as ever. What an amazing treat it was!