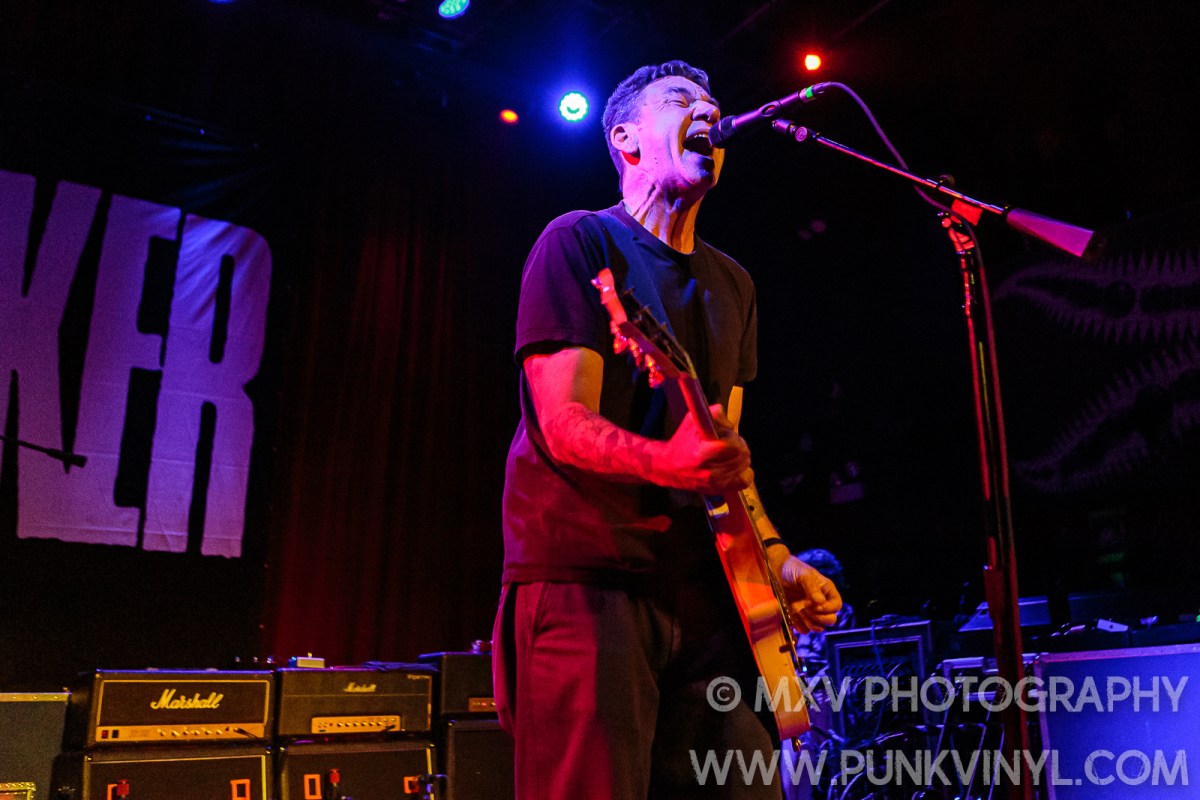 Thursday night was the second of an unprecedented four night run of Jawbreaker playing the House of Blues in Chicago. They are touring in celebration of the 25th anniversary of their last studio album, Dear You and are playing the entire album* along with other songs. The band has been packing houses on every stop of this tour and this was no exception as the first two shows sold out so fast that they added an additional two nights here to satisfy the demand. The opening acts were the same for all four nights here as well.

First up was comedian, Irene Tu. Irene is extremely witty and has a really good delivery for her topical humor. She did some similar material as the previous night but tweaked it a tiny bit, making it even stronger, and she did some material that she hadn’t done already. She was even funnier this evening and the crowd was really into it. If you have a chance to see her do comedy make sure you do it, it will be well worth your time and money!

Chicago’s Smoking Popes took the stage next. Just like the previous night, they put their best foot forward immediately and played a similar set as the night before but swapped out a couple of songs for different ones, including “Let’s Hear It For Love”. The setlist for this night was even stronger, and their playing was equally top notch. The crowd was way into them as well, which makes sense as they are longtime hometown heroes. Their 30 minute set went by in the blink of an eye and was very enjoyable.

Built To Spill soon followed and they played a completely different set than the previous evening. This time they did 11 songs, starting with “Three Years Ago Today”. Lots of great, intricate guitar work layered on top of a solid rhythm section made for 45 minutes of ear pleasing indie rock. They even did a great cover of the Bee Gees’, “I Gotta Get a Message To You”! Keeping with the trend of the evening, they totally topped their previous performance.

The club was so packed by the time Jawbreaker took the stage that it was near impossible to move anywhere in the venue. The curtains opened and the band started off this night’s set with “Want” from their first album, Unfun! What an incredible surprise. People lost their minds from the first chord as pretty much no one was expecting to hear anything from that album (an album which, by the way, is a masterpiece)! The song sounded as good as ever, if not better, and the band sounded even better than they did the night before. Talk about flying out of the gate! When the song was over, Blake made a witty comment about it not being from Dear You and then the band got to work on some Dear You material.

Jawbreaker started working their way through Dear You the same way they did the previous night, with the reverse one-two punch of “I Love You So Much It’s Killing Us Both” and “Save Your Generation”. Somehow the band got tighter and more energetic than the previous night, which was really hard to top but they did it! Maybe it was Blake’s fresh haircut that made the band more streamlined, but they were at least 100 percent better than they were the night before, and that night’s show was amazing! This night was just pure Jawbreaker bliss, played to perfection with amazing sound to boot!

Tonight we got “Jinx Removing” inserted into the mix, which sounded great, then it was back to the Dear You business for “Chemistry”, “Fireman”, and “Jet Black”, again all sounding amazing and putting the album versions to shame. In fact let’s hope they record a live album on this tour as once you hear these Dear You songs played live on this tour, the album may not measure up to how great they sounded live. “Condition Oakland” once again graced us mid-set and then a few songs later we got another wonderful surprise in the form of a really intense rendition of “Parabola”!

The band finished off the main set once again with “Accident Prone” and left the stage for only a few minutes before returning for a three song encore and this is where it was a total mind blower! The first song of the encore was “Chesterfield King”! It’s a safe bet every Jawbreaker fan was in heaven at this point. The encored finished off with “Unlisted Track” and “Basilica”. The band said thanks and goodnight and left the stage and the entire audience went home with huge smiles on their faces and some of them may even have been moved to tears. It was an unbelievable performance that would have easily satisfied the harshest of critics! What an incredible show!