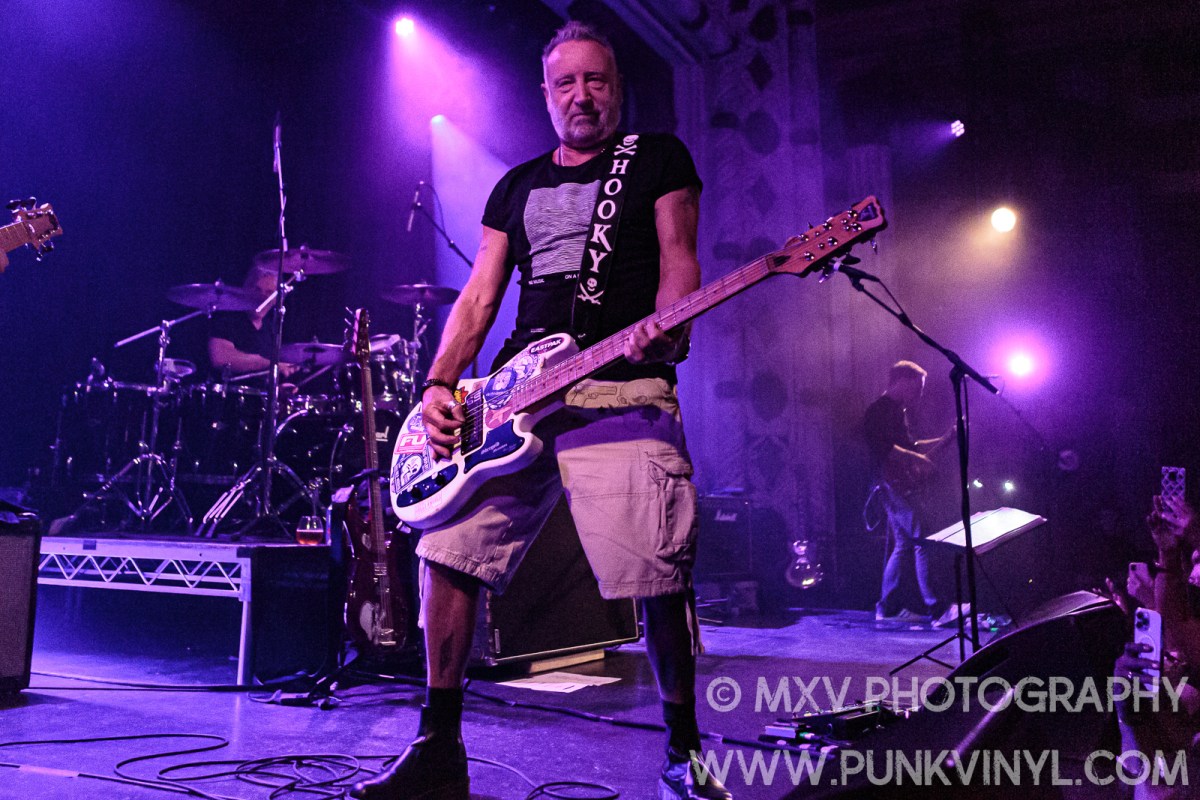 The Metro, Chicago’s legendary music venue, is celebrating its 40th anniversary this year and there’s been a handful of really great events happening there this summer to mark the event. In a continuation of the ongoing celebration, Peter Hook And The Light played the first of two big shows on Friday Night. Every time Peter Hook plays the Metro it draws a sellout crowd quickly and this night was no different. For this weekend’s shows he was billing it as “Joy Division: A Celebration” and promised to perform the Joy Division albums, Unknown Pleasures and Closer, plus an opening set of New Order songs!

When the show started, beloved Metro owner Joe Shanahan took the stage to introduce Peter Hook. He said that Hook has the distinction of performing at the Metro in every one of the four decades of Metro’s existence! He also gave a little history of Hook’s appearances over the years at the club and also thanked the crowd, his wife, and the wonderful Metro staff for making the club the legendary and special place it is over the past 40 years. It was very nice and made this event feel even more like the special event that it was.

Hook and the band took the stage and played five New Order songs, starting with, “Your Silent Face” The crowd was dancing, the room was lit up with people’s phones capturing video and photos, and many others just stared adoringly at the stage while smiling and soaking in the great sounds. Everything sounded great, thanks in no small part to the Metro’s newly updated sound system. Man that room sounds better than every now and it always sounded good! They quickly followed up with “Dreams Never End”. Some of the songs Peter Hook handled vocals on, and on one or two the guitar player did the vocals and both sounded great. As they progressed through the New Order material, the crowd seemed to get more excited with each song. They completed the New Order mini set with, “Age Of Consent”, “True Faith”, and “The Perfect Kiss” before leaving the stage for a short break.

When they returned, it was time to tackle Joy Division’s, Unknown Pleasures. Hook did all the vocals for the rest of the evening and his voice was a great match for the Joy Division songs, bearing a bit of a resemblance to the late Ian Curtis. They started with “Disorder” and proceeded to play the entire album in order. The crowd loved every minute of it and many were dancing during their favorite songs. The performance was spot on and Hook’s vocal delivery was very strong and he also seemed to be having a great time up there performing those songs. When they got through the entire album, the band left the stage for another short break.

The band once again took the stage to begin playing Closer. They somehow sounded even better than the first Joy Division set so who knows what kind of magic elixir they had backstage but whatever it was sure worked! “Isolation” sounded particularly amazing but the entire set was pretty flawless. The crowd loved this set every bit as much as the previous one. When they were done with that album they once again left the stage for a short break, but it wasn’t over yet!

The band came out for one final time to do a four song encore that consisted of three Joy Division songs and one New Order song. They started with “Digital” and followed it up with New Order’s, “Ceremony”, which sounded amazing. They ended the night on a huge double high note of “Transmission” and “Love Will Tear Us Apart” before Hook gave a heartfelt thanks to the audience and left the stage. All in, it was easily over two hours of amazing Joy Division and New Order songs, played by one of its creators, and a wonderful celebration of four decades of that music, along with four decades of one of the best music venues in history!