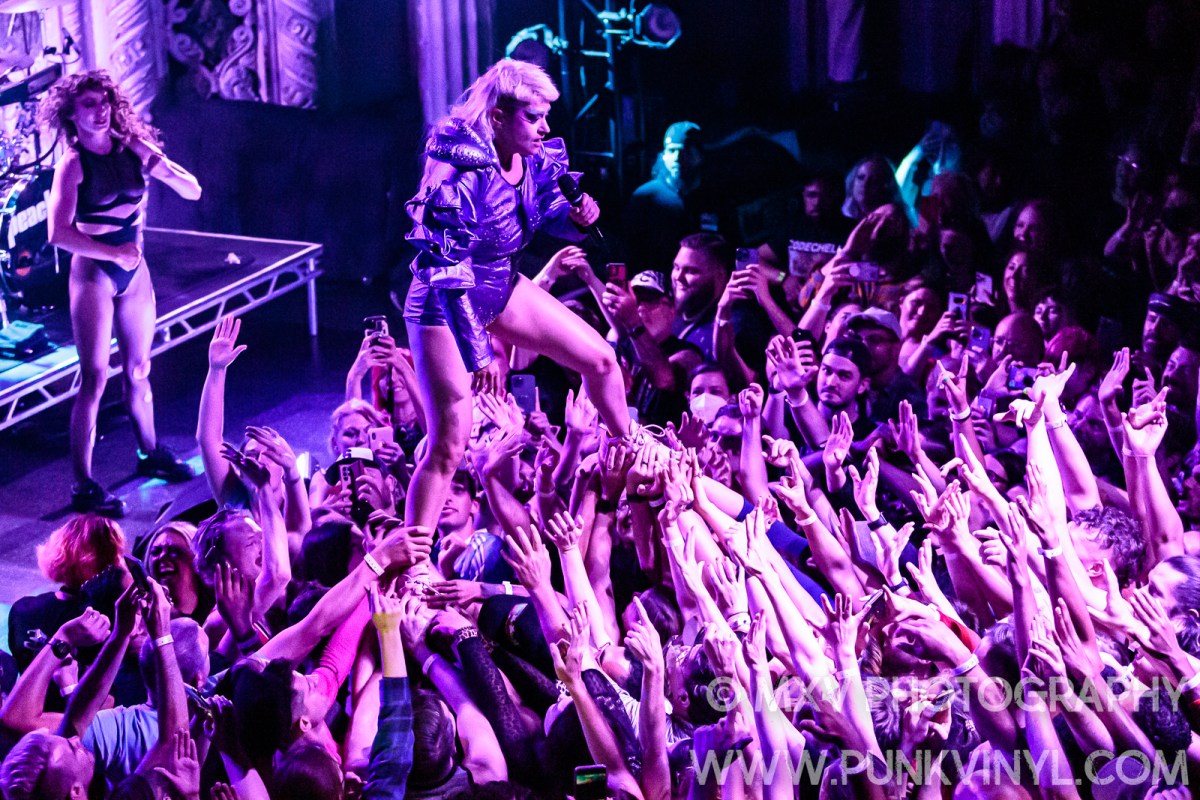 Sunday night the Metro hosted a show that was well worth staying up late on a school night for when Peaches made her return to Chicago! The Metro was packed full with a wonderfully diverse audience for this event and it really had the air of something special from the moment you walked into that legendary room.

Imagine being 18 years old and you find yourself on the stage of a world famous music venue opening up for an artist on the caliber of Peaches. That’s exactly the position that solo artist, Sophie Powers, found herself in. She handled it like a pro. Her songs were electronic based and she had a really good voice (that also had its share of processing effects on it at various times). Her songs were catchy and fun, and she even did an impressive cover of Nirvana’s “Heart Shaped Box”. She had a good personality and strong stage presence during her enjoyable 30 minute set.

Peaches was up next and the people were very excited. This isn’t just a normal tour for her, this tour is celebrating 20 years of The Teaches of Peaches, her second album that produced one of her most famous songs, “Fuck The Pain Away”. For this show she promised to play the entire album and that’s exactly what she did, but wait there’s more!

On top of having some really great songs, many which lyrical content explores sexuality, world events, and even comedy, Peaches stage show is also part performance art. There were more costume changes and stage props than you could keep track of, and the stage was a constantly rotating cast of dancers and various musicians. Costumes range from being naked except for a thong and tape covering nipples, to elaborate dancing vaginas. Sometimes Peaches would shed layers of costume mid-song, all while never missing a beat in her excellent vocal delivery. She offered a lot of between-song banter too that was largely comical and sometimes educational. She was very engaged with the audience which helps them form an even stronger connection with her. During one song she instructed the crowd to put away their phones and hold up their hands to brace her while she walked on top of the audience and performed the entire song as they held her up! It was a huge sea of raised arms and quite a spectacle.

While her songs are largely electronic and dance driving, Peaches and her band also can rock with the best of them and there were some heavy. numbers included as well, especially once they got through playing The Teaches of Peaches and played another hour’s worth of songs spanning her long career. Every song sounded great and the entire show was so much fun. It was a huge visual spectacle and each song there was something new to see, coming to a climax with a giant inflatable condom that inflated over the entire crowd that Peaches got inside and walked through!

The show concluded with a lengthy rendition of “It’s All Coming Back To Me Now” which was pretty hysterical and was a fun way to end a whopping 22 song set. It was an incredibly entertaining and unique performance both musically and visually and was really something special!