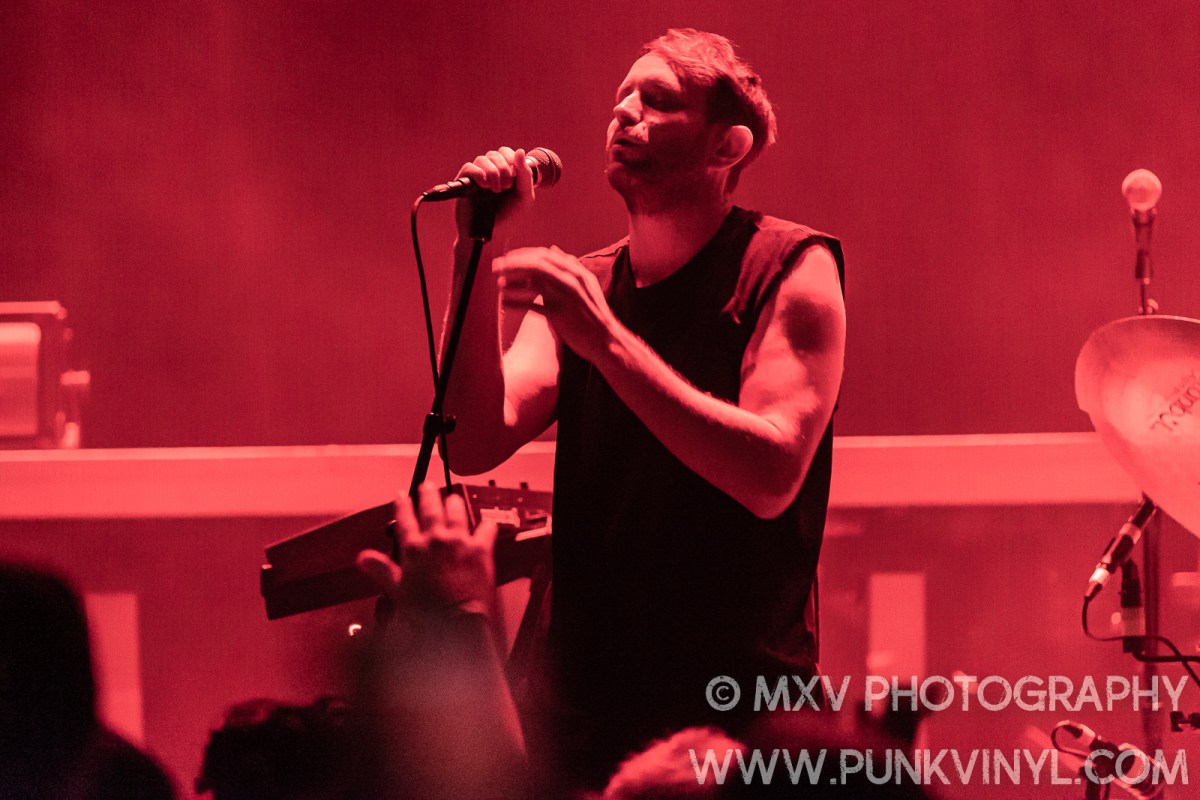 Monday night was a good one to stay out late on a school night when Health headlined an amazing three band bill at the ultra-nice Park West. A ton of people came out for the show and all three bands, like most bands, have been off the road for the past couple of years due to a little thing called a global pandemic. It was a long time coming to have two of these bands return.

After a bit of a tumultuous couple of years, Street Sects is back and better than ever! They recently released the final chapter of their Gentrification 7″ single series and then hit the road for this tour. The dynamic duo of multi-instrumentalist Shaun Ringsmuth and vocalist Leo Ashline were in top form this evening as they played a thirty minute set that revolved heavily around the first album era of their material. They were tight, powerful, and full of energy. Leo stalked the stage, what little room there was on it, as he belted out his trademark vocals as strobe lights flashed the fog filled stage. Deeper in the set you could actually see the band members on stage as the strobes turned into flashing colored lights. A couple of highlights of the flawless set included “Featherweight Hate” and “If This is What Passes For Living”, but the entire set was rock solid and the only flaw was that it wasn’t longer! It is so great having them back!

Next up was Perturbator. This band was also a two-piece with a live drummer and a multi-instrumentalist/vocalist. They played some really great electronic music that was danceable, but still heavy and featured lots of cool tempo changes and layers of sound. Some songs had vocals but many were instrumentals. They had really cool light shows that complimented the music and their hour long set had people moving around and they were captivated the entire time, so much so that the crowd demanded one more song when they finished playing, and they got it! They are a fantastic live act.

Health took the stage and the crowd was super excited and roared with delight the minute they stepped out. They opened with “Identity” and sounded amazing. They have a really unique blend of industrial and noise rock, but with beautiful melodic vocals that are silky smooth. Their songs have great hooks, either with melodic passages or interesting use of aggressive sounds. There was a lot of flashing lights on stage, a lot of smoke and a fair amount of darkness. The visuals totally matched their sad music for horny people. They played a good bit of material from their recent few albums and it all sounded spot on. The crowd was way into it, they were waving their arms, occasionally crowd surfing and dancing. The band didn’t waste any time chatting between songs, they just kept playing one great song after another.

Health played for around an hour, including having Leo Ashline from Street Sects come out to sing “The Joy Of Sect” with them, which was their collaboration on the newly released Disco 4 Part II. That was a really nice touch. When the hour was up, Health left the stage but returned for a one song encore. It was a flawless performance that ended the night of three bands giving flawless performances. This tour is an amazing package of bands that totally complimented each other, making the whole show feel even more special.

Saturday night, The Bollweevils, one of Chicago’s finest punk bands from any generation, played a set during the Punk The Burbs fest at Base Camp in Lisle. The event was an all-day show that featured about a dozen...

There has been so many good shows in Chicago lately and it doesn’t look like that is going to change anytime soon. Friday night, Dinosaur Jr returned to the windy city to headline a show at The Vic.It has been a...