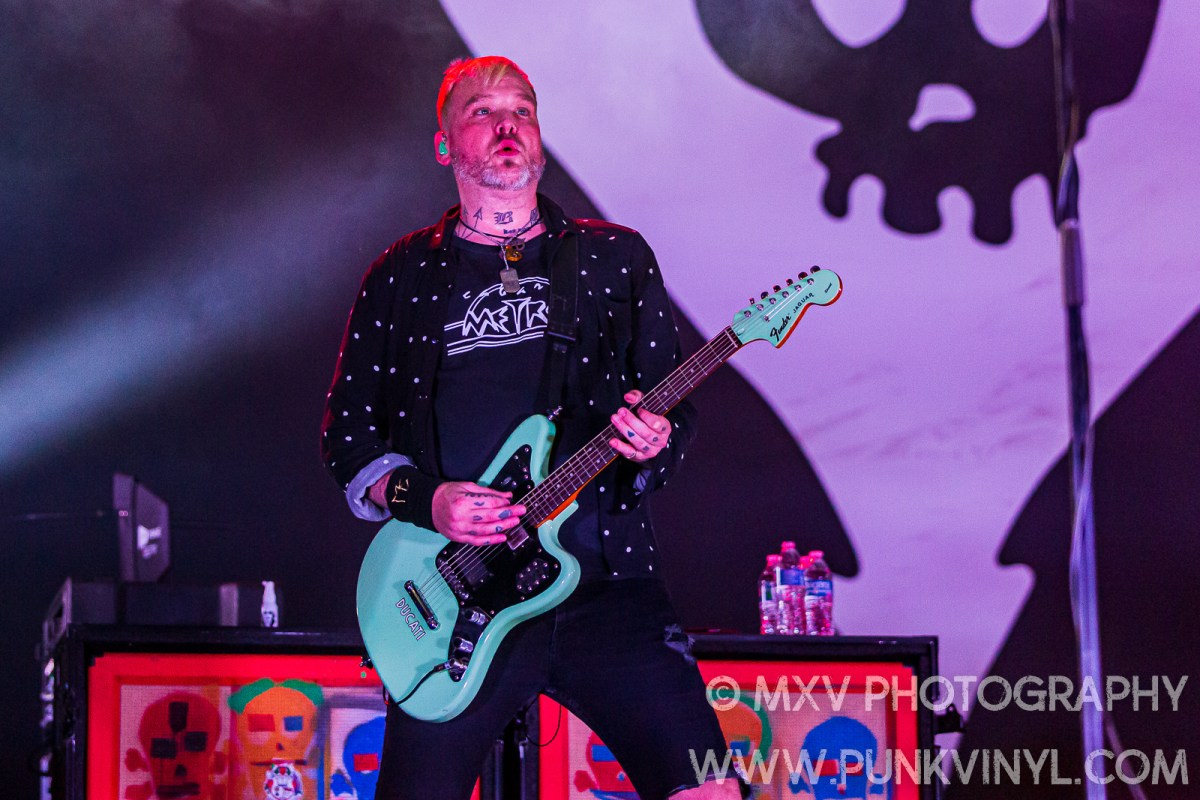 The best and last weekend of summer just happened which meant it was time once again for Riot Fest, which is the best festival that Chicago has to offer (and anyone who says otherwise is a liar). The weather was absolutely perfect on Friday night when the festival began its first of three days. There was a huge line of people waiting for the gates top open well before the scheduled start, and there was a laundry list of great bands to see. The beloved carnival rides were there of course, as well as a Logan Arcade pop-up arcade tent, lots of food vendors, and plenty of cool shopping options for all kinds of things like music and clothing. There was something for just about everyone, but the best part is always the bands so let’s get to it.

Sincere Engineer returned to Riot Fest this year, but this time was on one of the main stages. The band, led by the amazingly talented Deanna Belos, took to this massive stage like true professionals and played a great set of material from both of their albums. The crowd was way into it and there was even a corndog mosh pit that formed as a tribute to the band. Deanna’s voice sounded better than ever, and the newer material is even better than the earlier stuff. This act has a really bright future ahead and hopefully another new LP is in the works.  It was a great way to begin the fest and their set had everyone smiling.

Lucky Boys Confusion played on the Roots stage. Hailing from the Chicago area, they blended punk with elements of rock, ska and even hip-hop. They put on a pretty solid performance and the crowd that gathered for them definitely skewed younger.

Wargasm played the Rebel stage. This electronic rock duo (with additional live musicians) drew quite a large audience at that smaller stage. Milkie Way sported a thong bikini and bullet belt and handled both vocal duties and at times the bass. Sam Matlock did some vocals and played guitar. They both danced and jumped around the stage and were full of energy. They were really entertaining and catchy. It was a very fun half-hour set.

Lagwagon are no strangers to Riot Fest, or even punk themed festivals in general, and they made another return visit this year on the Roots stage. They drew a massive audience to see their trademark brand of high energy melodic punk. These guys have been around for decades and age hasn’t slowed them down one bit, they sounded as good as ever!

Sparta, a band that formed from partial remains of At The Drive In, was one of the bands that was brought in as a replacement for a couple of big acts that unfortunately had to cancel rather last minute. This three piece played loud guitar rock that shared a slight resemblance to At The Drive In when it comes to guitar sounds, but the songwriting is a lot different, yet equally interesting. They’ve never played Riot Fest before and a ton of people came out to see them make their Riot Fest debut. The band more than delivered the goods and while they may not have been as big of a deal to some fans as either of the bands that had dropped off the fest, they more than held their own and were well worth watching.

Rocket From The Crypt returned once again and this time they were decked in in matching black outfits reminiscent of a mariachi band. For this year they played the entire Group Sounds album. They were spot-on in their rendition of this fine album and all these years later (more than three decades), Rocket From The Crypt is still one of the best rock bands around. They are just always consistently excellent and it was a lot of fun having them play here again!

Descendents are one of those rare bands that keep getting better the older they get. They have played many Riot Fests, and have been around for over 40 years but somehow they keep getting tighter and sound better each time they come back. It is like they found the fountain of youth and have been drinking from it every tour because they can play circles around people less than half their age. They have so many great songs and kept playing one hit after another, touching many of the albums in their discography. Classics like “Myage”, “Coolidge”, “Clean Sheets”, “Silly Girl” and more have never sounded so good, and they have always sounded good! These four men were put on this planet to play these great songs forever, and hopefully they will keep at it. There was a massive crowd for them and everyone was dancing and singing and having a great time. Easily the best act of the day, if not the entire weekend. One of the greatest bands of all time and one that really were pioneers in this style of punk. True legends!

Cloud Nothings made their Riot Fest debut over at the Rebel Stage. They have a great sound that incorporates noise rock with indie rock and punk. This three-piece has lots of energy, interesting song structures, and a sometimes great wall of sound guitar noise that will knock you on your ass. They were really tight and they sounded great playing on such a large stage. Don’t sleep on this band, they are great.

Alkaline Trio closed the night on the Roots stage to an audience that went back as far as the eye could see. Many tens of thousands of people packed in to watch these Chicago punk veterans put on a pop-punk clinic. The crowd went absolutely insane dancing, moshing, crowd surfing, and singing along to one great song after another. It’s amazing how huge this band has become but their songwriting is so good and their songs so energetic and catchy that you can’t help but like them, even if their brand of pop-punk isn’t your usual cup of tea. They played for an hour and if they played for another two hours on top of that they likely would’ve kept nearly that entire audience captivated the entire time.

The first day of Riot Fest was more than a success. It was an amazing day and the rest of the weekend promised even more of the same, and boy did it deliver!