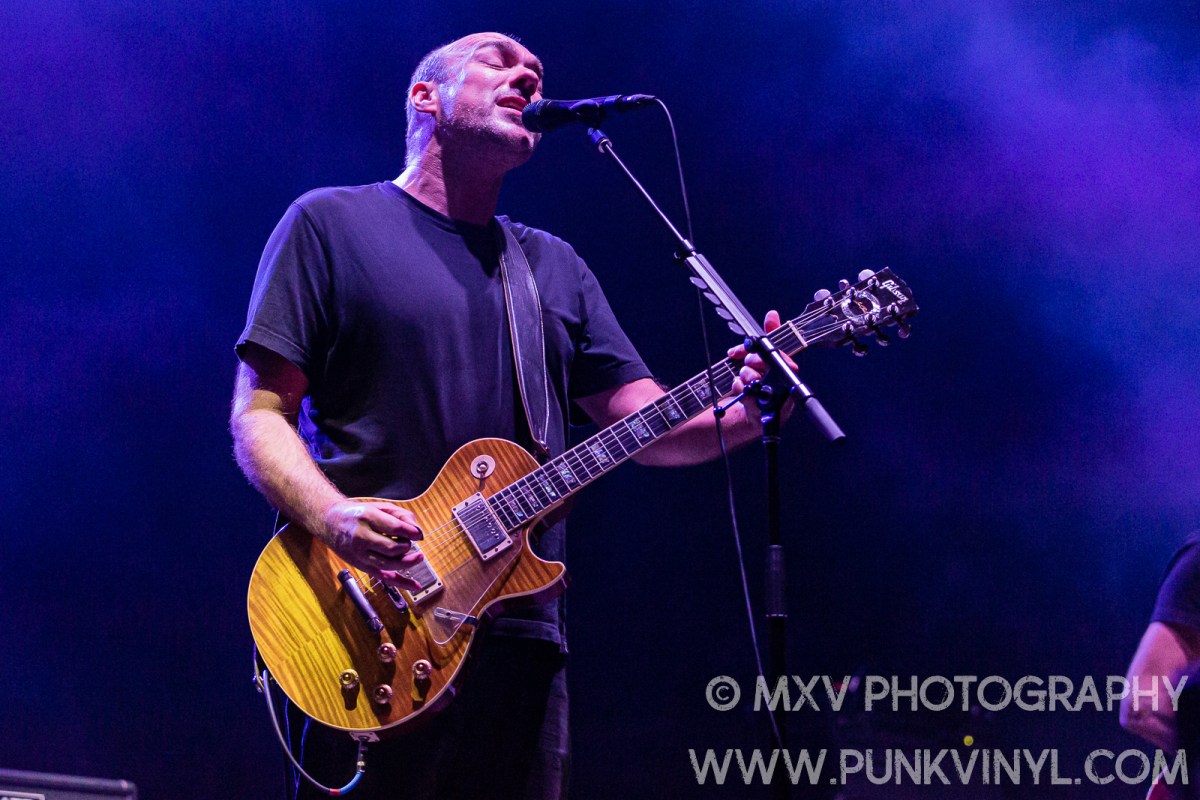 On Saturday, Mother Nature turned up the heat a few notches and so did Riot Fest with an amazing and diverse lineup of bands, including some really heavy hitters! You couldn’t have asked for more perfect weather, especially when the clouds moved in and made the temperature extremely comfortable for the rest of the day. The place was absolutely packed with people spanning multiple generations and everyone was having a great time. It had a fun and peaceful vibe throughout the park the entire day.

Hailing from Philadelphia, PA, Mannequin Pussy got the day started for many people over at the Radicals stage. This four piece (three female/one male) band performed punchy punk/indie rock. Some songs were melodic and some were faster and higher intensity. They had a hell of a lot of energy, especially considering it was so early in the day. They had a lot of fans in the audience too that were very excited to see them.

Next we had The Joy Formidable, who were from the UK. This three piece was one of the true highlights of the day. They had great loud and layered guitars that laid the foundation for their female vocal led indie rock. The songs had a bit of a shoegaze element in the guitar sound which just added to the oomph, but the songs are really catching and melodic. The band members were really enjoying themselves up there too as they were regularly smiling and the crowd ate them up like candy. This is a fantastic band that is more than worth going out of your way to see.

Next up was JXDN. This. young man was a big hit with the younger kids in attendance who packed themselves in front of the stage to sing along to all of his songs. These people knew every word to every song! He plays melodic singalong pop music and he was quite animated while performing, running around the stage dancing and for some reason was holding his crotch a lot while singing. Maybe that helps with singing the high notes, or maybe he had to go to the bathroom? Whatever it was it didn’t stop him from making all the youngsters happy.

7 Seconds had been regulars for Riot Fest dating back to the very first one in 2005. The band recently came out of retirement (because much like in pro wrestling, retiring from music is only temporary) and were welcomed back by a massive sea of people excited to see them again. 7 Seconds has always been an amazing live act and retirement only seemed to recharge their batteries as they sounded as good as ever. Sadly missing from the lineup was drummer, Troy Mowat, who wasn’t able to tour, but Sammy Siegler did a fantastic job sitting in the drum seat. The band played many of their most beloved songs and the crowd went nuts. A big pit formed, people were shouting along to the lyrics and the whole place was in a frenzy. 7 Seconds is another one of those bands that no matter how old they get, they play with the energy they had when they were young. They really are young until they die! It was amazing having them back, they were missed by many while they were away.

Next up was Yungblud. He was another act that attracted a huge younger demographic. They were swooning and screaming their heads off. He plays a mix of pop, rock and hip-hop and was jumping all over the place and dancing around the stage. He was really good and getting the crowd excited and constantly riled them up with his between song banter. It was like a modern equivalent of Beatlemania with how into him the young audience of all types were.

Bad Religion has been a regular to Riot Fest for years now as well, and they are also celebrating their 40th anniversary as a band. They have always been a consistent live band, putting on high energy sets of songs culled from their lengthy catalog. This performance was no different, they busted out a bunch of favorites and sprinkled in deeper and newer songs. They wasted very little time between songs and just went from one good song to the next. If you are a Bad Religion fan (and really who isn’t?!), then you know what to expect and they always deliver the goods.

Gogol Bordello was another last minute replacement for bands that had to drop off the fest and they were a really nice addition to an already great lineup. They’ve played this fest at least a couple of times before and they’ve always been a highlight. Their unique music that they dubbed “gypsy punk” is unlike anything you’ve heard before and is a mishmash of styles. They have so much energy that it is infectious and they really get people going crazy. The songs are fast and catchy and you can’t help but get sucked into the fun.

It has been something like 20 years since Sunny Day Real Estate broke up which broke everyone’s heart. In some sort of miracle, they reunited! This was something really special to say the least. The band expanded to a five piece for this tour as well! When they opened their set with “Seven” I swear to you there were people in the audience crying for joy, and people went nuts when they followed it up immediately with “In Circles”. From there they touched on songs from each record and every song sounded amazing, you’d have thought they never stopped playing together, they sounded that polished! Highlights included “Pillars”, “Killed By An Angel”, “Roses In Water” and the show ending “Days Were Golden”. They were absolutely perfect and the only flaw was they didn’t get to play for two more hours!

Over on the biggest stage, The Misfits (the “OG” version with Glenn Danzig, Jerry Only, and Doyle) ended the evening by playing to a sea of what looked like a half million people watching they play the entire Walk Among Us album. Of all the OG reunion shows they’ve done here (this is the third), this one was by far the best performance they’ve given. People went crazy and when the band was done, they played a lot of other songs too. They had really cool visuals going behind them as they played, Jerry broke about a dozen bass guitars, Doyle punched his guitar like it owed him money, Danzig swore a lot between songs, and no one was allowed to take photos. It was something pretty special though and it is incredible how huge that band has become in the 39 years since they broke up. What a way to end the second night of the fest on what was an absolutely perfect day!