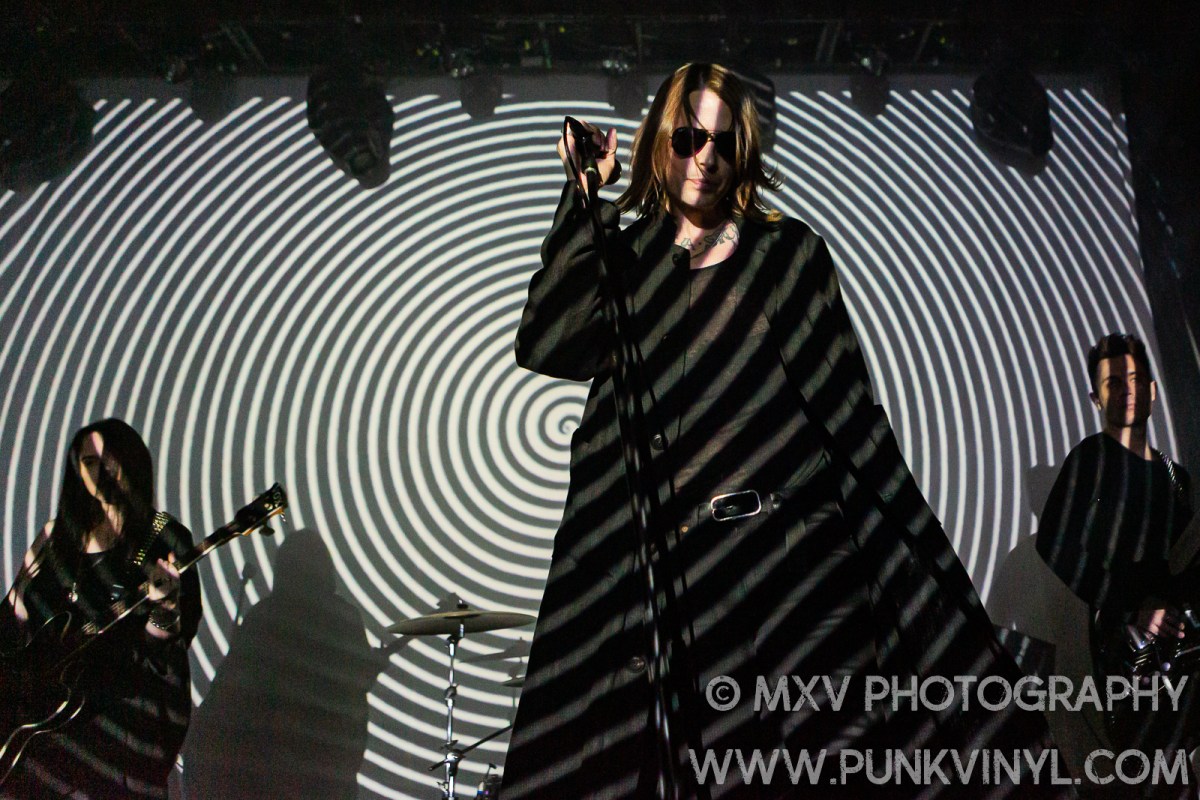 The start of fall means that it is time for the Cold Waves Festival. This is the tenth year of the festival that was started to honor Jamie Duffy, a beloved member of the industrial music scene here in Chicago. The event grew into a multi-day affair that incorporates some of the best Industrial and Dark Wave acts around, both veteran bands and newer acts. Friday night was the second night of the event and featured Cold Cave as the headliner and was held and the legendary Metro.

First up was Rare DM. This is a one-woman act that weaves dark wave with synthpop and electronica. She has a really great voice and danced and moved around the stage quite a bit. The songs were infectious and made you want to move your feet. The set was short but sweet and incredibly entertaining.

Next was Ghostfeeder. This duo, hailing from New York, played in relative darkness as they delivered a 30 minute set of electronic rock/sythpop. The guitar elements gave their music a harder edge that was a nice compliment to the cool electronics.

Choke Chain was a one man band. This guy had a table set up with some electronics that provided all the music while he provided all the vocals. The music was heavy and aggressive and very much in the classic industrial style, and his vocals were processed and angry and intense. He stalked around the stage pulling at his hair and screaming his head off as the music hit hard enough to punch you in the guts. It was awesome!

Spike Hellis was next. This two-piece featured a guy who handled all kinds of electronics and did some vocals, as well as a female lead vocalist. This EBM band performed some great, layered music that had many people in the audience dancing their asses off. The singer did her own share of dancing while she was singing and she was a very striking frontwoman that commanded attention. They were mesmerizing.

Hailing from Sweden, Kite was next. This dark synthwave band totally stole the show. Their songs were very. moody and complex, and the vocals just exploded with passion and emotion. They had a lot of really cool lighting effects as part of their stage show and the music was so good that it was spine tingling. They were amazing and having them play here was a true highlight of the entire weekend. If you ever get an opportunity to see them play do not miss them. The crowd loved them too.

Cold Cave finished the evening off with an hour-plus long set of smooth gothic/post-punk. They share some similarities with bands like Sisters of Mercy and Joy Division. Any fan of that style of music would’ve found a lot to love about Cold Cave, they take all the best elements of those types of bands and deliver it in a way that still makes it sound fresh (not that the style of music sounds at all dated). They had some great visuals being displayed behind them that added to the ambiance as they just played one great song after another. At the end of the set they did a one song encore where the daughter of the singer joined in on vocals and totally killed it! It was beyond adorable and not the kind of thing you’d expect at a darkwave/goth/post-punk show! What a fantastic set from start to finish.

This second night of the fest featured a lot of “new to Cold Waves” acts and probably did a great job exposing some old-timers (myself included) to a lot of great newer acts they. may not have been familiar with, and the entire show was great from start to finish, it was just one great act after another.