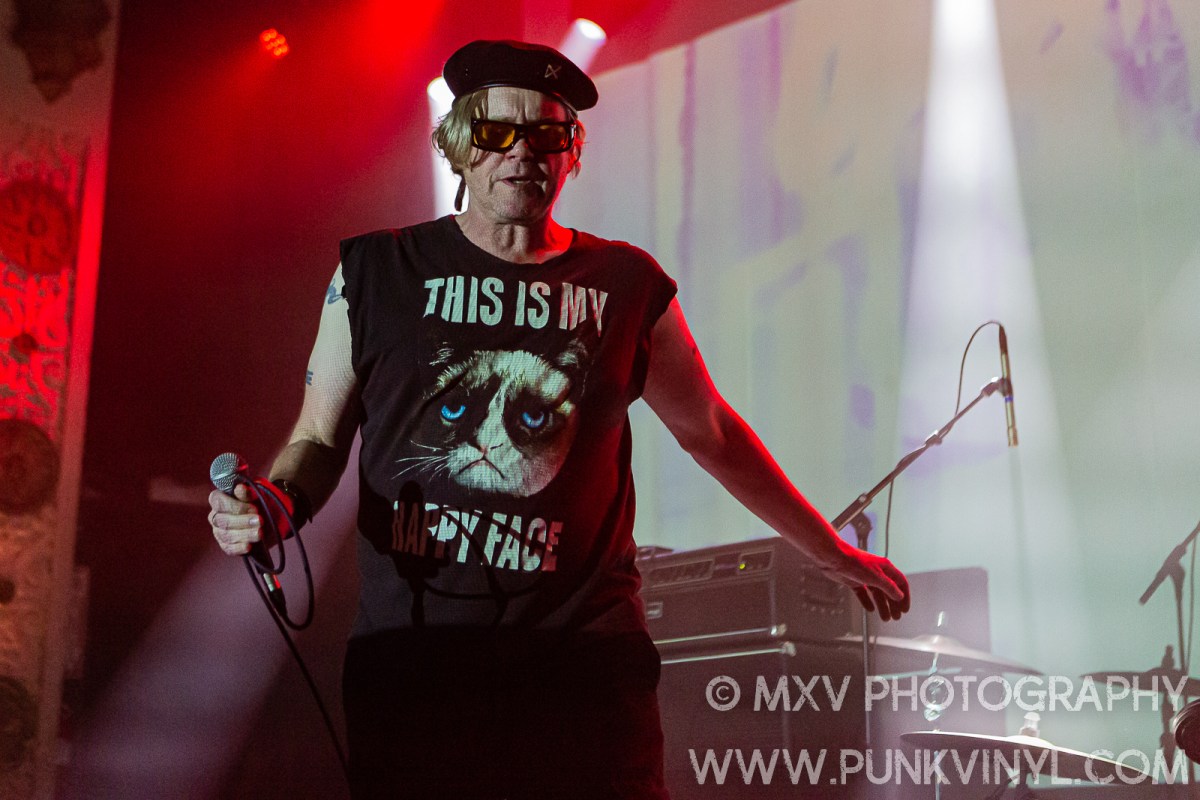 Saturday night was another night of Cold Waves X at Metro, this time being headlined by Revolting Corpse, which is the final appearance of former Revolting Cocks members, sans Al Jourgensen, performing the music of the Revolting Cocks. In recent years these fine former Revco members, along with a few other like-minded musicians have been playing shows celebrating the great music of the former industrial music supergroup. They decided it was time to lay it to rest once and for all with the big sendoff being in the exact same club where it all began! They were joined by a slew of great opening acts.

Cyanotic started the night off with a 30 minute set of hard edged industrial music. They were loud and aggressive, they had a ton of power and the vocals were the right kind of angry and growling. It’s the kind of stuff that fans of Ministry and the more guitar driven side of industrial rock would eat up like candy, and they did!

Haloblack was next. This band is the project of Bryan Black and for the performance it was him on vocals, all the music pre-recorded, and Jim Marcus (of Die Warzau) on “percussion”, meaning he was kneeling on the stage and hitting metal bars with screwdrivers. The songs were kind of slow and grinding, with a eerie, creepy darkness about them. The vocals were kind of low key and processed. It was quite enjoyable and harkened back to the early 90’s industrial era.

Haex quickly followed. This was a duo where one member played guitar and the other did vocals and occasional electronic percussion. Great low-end synths, dark tones, the right kind of repetitious industrial dance hooks, and some great, gruff vocals rounded out the package.

Rein was up next. A solo artist, Rein performed some really catchy electro/EBM music. High on the dance grooves with some great vocals. There was a lot of dancing as the vocals were delivered and some of the songs had some great sing-along choruses.

Stromkern was an electro/industrial/rock band that incorporates hip-hop in a similar way that Consolidated did at times. The way they weaved these musical styles was really well done and the songs were super high energy, fast paced, energetic yet super infectious at the same time. Their set went by in the blink of an eye and the whole performance was stellar.

Revolting Corpse was up next, but let’s just call them Revolting Cocks because that’s really what it was and is. Maybe it is for legal reasons they aren’t using the proper name, so we will add the term, allegedly to the name. This alleged band of Revolting Cocks took the stage moments after Brian Dickie announced to the crowd that it was 35 years ago that the very first Revolting Cocks performance took place on that very stage, which is what was recorded and filmed for the live album/video, You Goddamned Son of a Bitch. When the band, comprised of Chris Connelly, Paul Barker, Jason Novak, and a drummer Dan Brill, took the stage, they started the final Cocks show off the same way the first one did, with the “You Goddamned Son of a Bitch/Cattle Grind” duo! It was a beautiful full-circle moment.

From there they busted out most of the hits, and self-admittedly one of the misses (from the third album). The band sounded in fine form and it was a lot of fun to revisit these great songs, performed by great people, one last time. Highlights included “Attack Ships On Fire”, which had three botched starts that Chris Connelly made comedic light of (technical difficulties are bound to happen with this type of music), “38” which featured a surprise appearance by Richard 23 to sing, “Stainless Steel Providers”, “No Devotion”, “Physical” and of course the set ending, “Beers Steers and Queers”. The band returned for a one-song encore of “Do You Think I’m Sexy” that saw Richard 23 return to help sing and was a fun party anthem for the Cocks’ curtain call. The end of an era of over 35 years of fantastic music.